Discover the beauty of Germany and its variety. There's not just Berlin and Munich, you'll find a lot more to see. 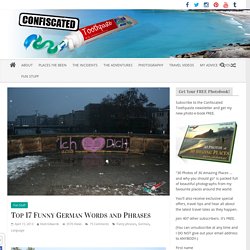 Not only is it the least romantic language of them all (“I love you” in German sounds more like “I will hit you with shovel”) but it sounds great in a deep voice (think Rammstein) and almost everything sounds vaguely sexual (think Rammstein), particularly if you say it with a slight smile. It is the only language to capitalise every noun, which not only wears out Shift keys faster but is deliciously ironic given German people’s reputation for efficiency. Not only that, but every noun is given a gender with often bizarre results- a small girl is neuter rather than female, and the ocean can be either male, female or neuter depending on what term you use to describe it (Ozean, Meer, or See).

Mark Twain even wrote of his experience with the German language “surely there is not another language that is so slipshod and systemless, and so slippery and elusive to the grasp. 17. In English it’s a pen, in French a stylo, in Spanish a pluma. 16. 15. 14. 13.Rathaus 12. 11. 10. 9. 8. 10 German Slang Phrases to Sound Like a Native. Do you have cups in your cabinet? 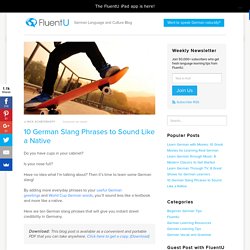 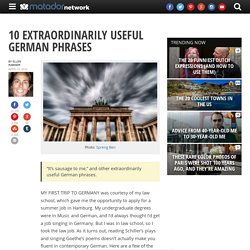 MY FIRST TRIP TO GERMANY was courtesy of my law school, which gave me the opportunity to apply for a summer job in Hamburg. My undergraduate degrees were in Music and German, and I’d always thought I’d get a job singing in Germany. Heidelberg: Germany at its most romantic. With around three million day-trippers every year, Heidelberg can boast some of the most impressive visitor statistics in Germany, Europe and probably the world. 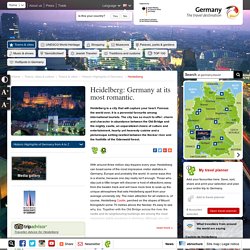 In some ways this is a shame, because one day really isn't enough. Those who stay just a little longer will discover a host of attractions away from the beaten track and will have more time to soak up the unique atmosphere that sets Heidelberg apart from your average university city. The main attraction for all visitors is, of course, Heidelberg Castle, perched on the slopes of Mount Königstuhl some 70 metres above the Neckar. It's easy to see why, too. We Took the Road Less Traveled: Heidelberg Round Two.

One of our very first day trips after arriving to Germany last June was to Heidelberg. 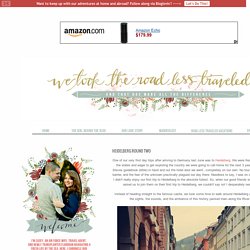 We were fresh off the plane from the states and eager to get exploring the country we were going to call home for the next 3 years. I had my Rick Steves guidebook (bible) in hand and out the hotel door we went...completely on our own. No tour guide, big language barrier, and the fear of the unknown practically plagued our day there.

Needless to say, I was on edge the whole time. I didn't really enjoy our first trip to Heidelberg to the absolute fullest. 10 Top-Rated Tourist Attractions in Regensburg. Regensburg lies at the most northerly point in the course of the Danube, where it's joined by the River Regen and navigable all the way to the Black Sea. 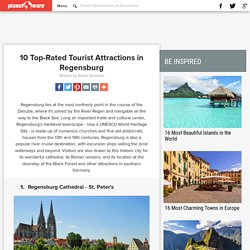 Long an important trade and cultural center, Regensburg's medieval townscape - now a UNESCO World Heritage Site - is made up of numerous churches and fine old aristocratic houses from the 13th and 14th centuries. Regensburg is also a popular river cruise destination, with excursion ships sailing the local waterways and beyond. Visitors are also drawn to this historic city for its wonderful cathedral, its Roman remains, and its location at the doorstep of the Black Forest and other attractions in southern Germany. 1 Regensburg Cathedral - St.

Peter's Regensburg Cathedral - St. Things to do in Regensburg, Germany. 48 Hours in Dresden - Dresden is a city with two different faces- you have the bombastic baroque beauty of the Aldstadt and then you have the grungy alternative feel of the Neustadt. 48 hours in the city gives you enough time to explore these two great but very different sides to this fantastic city. 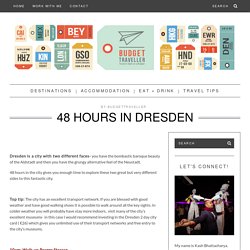 Top tip: The city has an excellent transport network. If you are blessed with good weather and have good walking shoes it is possible to walk around all the key sights. In colder weather you will probably have stay more indoors, visit many of the city’s excellent museums- in this case I would recommend investing in the Dresden 2 day city card ( €26) which gives you unlimited use of their transport networks and free entry to the city’s museums. 10am: Walk up Prager Strasse Starting point for my adventure was the Hauptbahnhof. 12pm : Saxon potato soup lunch at Aha Inner Aldstadt is packed with mostly expensive cafes and restuarants –avoid these and pop into Aha: fair trade store and café. 1pm: Frauenkirche 3pm: Zwinger. Top Ten Things to Do in Dresden, Germany. » 30 things to do in Hamburg. Hamburg has always been on my bucket list but somehow I never managed to pay a visit to the city nicknamed the Pearl of the North. 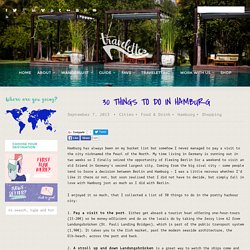 My time living in Germany is running out in two weeks so I finally seized the opportunity of fleeing Berlin for a weekend to visit an old friend in Germany’s second largest city. Coming from the big rival city – some people tend to force a decision between Berlin and Hamburg – I was a little nervous whether I’d like it there or not, but soon realised that I did not have to decide, but simply fall in love with Hamburg just as much as I did with Berlin. I enjoyed it so much, that I collected a list of 30 things to do in the pretty harbour city: 1.

Things to do in Hamburg: Germany City Guide by 10Best. Despite being one of Germany’s largest and most industrial cities, Hamburg is dominated by water and greenery. 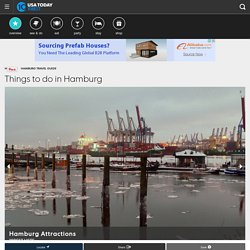 For outdoor recreation, check out the Alster Lakes - a harbor/riverboat cruise is another 'must-do' in Hamburg. Hamburg’s attractions are connected via the integrated underground and local train network. The city’s main art museums, the Museum fur Kunst und Gewerbe and the Kunsthalle, are south and north of the main train station respectively, while more family-oriented attractions such as the Hamburg Dungeons and Miniatur Wunderland are located on the harborfront, home to the ambitious Elbe Philharmonic Hall project (expected completion date 2015) and upcoming HafenCity.

Hot Tips: What to do. Welcome to Cologne where the cathedral spires tower over Germany's oldest city and its innumerable cultural and historical treasures, world-famous museums and active art scene. 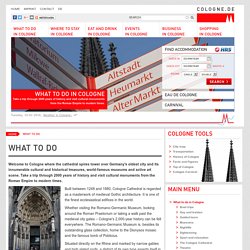 Take a trip through 2000 years of history and visit cultural monuments from the Roman Empire to modern times. Built between 1248 and 1880, Cologne Cathedral is regarded as a masterwork of medieval Gothic architecture. The Top 10 Things to Do in Cologne - TripAdvisor - Cologne, Germany Attractions - Find What to Do Today, This Weekend, or in January. 18 German Castles That Put Disney To Shame. 15 Top-Rated Tourist Attractions in Germany. History, culture, and natural beauty perhaps best describe the essence of vacationing in Germany. With its historic cities and small towns, along with an abundance of forests and mountains, visitors are spoiled for choice. Those wanting to sightsee or experience the arts should head to the metropolitan areas, while those looking to engage in recreational activities should visit places such as the Bavarian Alps, the Black Forest, or the Mosel Valley. Lovely old cathedrals and grand palaces are everywhere, and in the smaller towns and villages, many centuries-old traditions continue.

At the cultural heart of Germany is the capital, Berlin, home to many fine museums and galleries, while nature lovers will find a world of possibilities in Germany's great outdoors. 1 Editor's Pick Berlin's Brandenburg Gate. Places to Visit in Germany. Though it remains far less well known or understood by outsiders than some of its neighbours, since reunification Germany has at last gained a higher profile as a place to visit, thanks partly to the remarkable resurgence of Berlin, one of the most fascinating and exciting cities in Europe.

But the appeal of the reunified Germany is not limited to the capital. The 2006 football World Cup was something of a turning point, both with regards to Germany’s image abroad and to its own self-image, rehabilitating the idea of German patriotism for the first time since the war. When football fans descended on cities all over the country, they discovered a friendly, multiethnic and multicultural nation that was, for the most part, at ease with itself, finally happy to fly its own flag in a harmless display of national pride. The TOP 100 sights and attractions in Germany. 10 Best Places to Visit in Germany. Best known for its famous Oktoberfest and World War II history, Germany is also home to some of Europa’s most beautiful scenery, fairytale castles, important historic sites and lively party scenes. Located in the heart of Europe, Germany maintains the continent’s most powerful economy. An overview of the best places to visit in Germany: 10Leipzig The largest city in Germany’s federal state of Saxony, Leipzig is known for its vibrant arts and culture scene shaped by famous music composers like Bach, Richard Wagner and Felix Mendelssohn.

Tourists today can enjoy performances of Bach’s music at the St.