GCSE Bitesize - Hitler's rise to power. Operation Foxley. Prior plans[edit] One of the first actual British plans to assassinate Hitler was to bomb the special train "Amerika" (in 1943 renamed "Brandenburg") he travelled in; SOE had extensive experience of derailing trains using explosives. 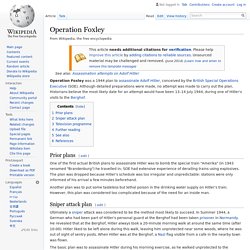 The plan was dropped because Hitler's schedule was too irregular and unpredictable: stations were only informed of his arrival a few minutes beforehand. Another plan was to put some tasteless but lethal poison in the drinking water supply on Hitler's train. However, this plan was considered too complicated because of the need for an inside man. Sniper attack plan[edit] Ultimately a sniper attack was considered to be the method most likely to succeed.

The basic plan was to assassinate Hitler during his morning exercise, as he walked unprotected to the tea-house in the Berghof compound. An "inside man" was also recruited: vehemently anti-Nazi Heidentaler, the uncle of a captured soldier, Dieser, lived in Salzburg, 20 kilometres from the Berghof. See also[edit] Color photos from pre-war Nazi Germany. The ceremonial was considered as art. 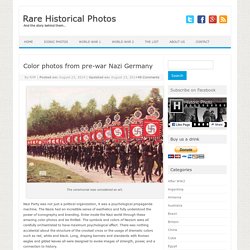 Nazi Party was not just a political organization, it was a psychological propaganda machine. The Nazis had an incredible sense of aesthetics and fully understood the power of iconography and branding. Enter inside the Nazi world through these amazing color photos and be thrilled. The symbols and colors of Nazism were all carefully orchestrated to have maximum psychological effect. There was nothing accidental about the structure of the crooked cross or the usage of dramatic colors such as red, white and black.

Nazi symbols are alluring. Imgur: The most awesome images on the Internet. Gfycat - jiffier gifs through HTML5 Video Conversion. Fast, simple gif hosting without size limits. The diary of Anne Frank: from the archive, 28 April 1952. In 1933 Mr and Mrs Frank left Germany with their two daughters, Margot, aged 7, and Anne, aged 4. 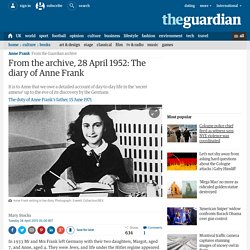 They were Jews, and life under the Hitler regime appeared precarious. They settled in Amsterdam. All went well until the Germans invaded Holland and subjected its Jews to the frustrating disabilities prevalent in Germany. They wore the yellow star to mark them as sub-human, their bicycles were forfeited, they were subjected to curfew and restricted shopping hours and forbidden to attend places of public entertainment or engage in sporting events. But - as Anne was to record later - “things were still bearable.” They ceased to be so in July, 1942. One survivorOf the eight inhabitants of the “secret annexe” only Mr Frank survived incarceration in a German concentration camp.

In a preface to the English translation Miss Storm Jameson dwells on the personality of the young woman who at the age of thirteen began to write it. Food was precarious - at times scarce and unpalatable. Adolf Eichmann. German Nazi official, a major organiser of the Holocaust Otto Adolf Eichmann[a] ( YKHE-mən,[1] German: [ˈʔɔto ˈʔaːdɔlf ˈʔaɪçman]; 19 March 1906 – 1 June 1962) was a German-Austrian SS-Obersturmbannführer and one of the major organizers of the Holocaust, referred to as the "Final Solution to the Jewish Question" in Nazi terminology. 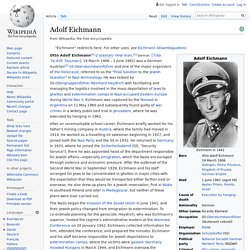 He was tasked by SS-Obergruppenführer Reinhard Heydrich with facilitating and managing the logistics involved in the mass deportation of Jews to ghettos and extermination camps in Nazi-occupied Eastern Europe during World War II. Eichmann was captured by the Mossad in Argentina on 11 May 1960 and subsequently found guilty of war crimes in a widely publicised trial in Jerusalem, where he was executed by hanging in 1962.

After an unremarkable school career, Eichmann briefly worked for his father's mining company in Austria, where the family had moved in 1914. Early life and education[edit] Early career[edit] Second World War[edit] Third Reich in Ruins. Rape during the occupation of Germany. Territorial changes and occupational zones of Nazi Germany after its defeat. 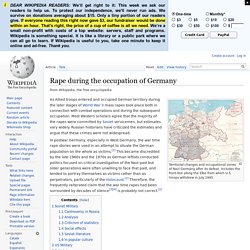 Includes the front-line along the Elbe from which U.S. troops withdrew in July 1945 As Allied troops entered and occupied German territory during the later stages of World War II mass rapes took place both in connection with combat operations and during the subsequent occupation. Most Western scholars agree that the majority of the rapes were committed by Soviet servicemen, but estimates vary widely. Russian historians have criticized the estimates and argue that these crimes were not widespread.

Soviet Military[edit] What did Hitler/Nazis think of Asians? : AskHistorians. 6 million victims of the holocaust. HUGE number : AskHistorians. How did Nazi Germany a regime born out of the ruins of World War 1 have so much access to a diverse pool of top notch academics by world war 2? ( Rocket scientists, Gunsmiths, Cytologists/ciphers, Tank and aircraft engineers) : AskHistorians.