German fury grows over inflation 'Horror-Kurve' as fears of destructive boom-bust cycle mount. German population shrinks as QUARTER of men say 'no' to kids. Germany lost 1.5 million inhabitants in its most recent censusThe population is predicted to fall by 19 per cent to 66 million by 2060Policy makers are throwing money at families in bid to stem the birth dearthExperts say it needs to welcome immigrants and encourage mums to workGermany's birth rate has fallen by 11% since 2000, while UK rose by 4.1% By Matt Blake Published: 13:11 GMT, 21 August 2013 | Updated: 15:51 GMT, 21 August 2013 Birth dearth: Policy makers are now throwing money at families in a bid to stem the birth dearth and encourage citizens to have more babies. 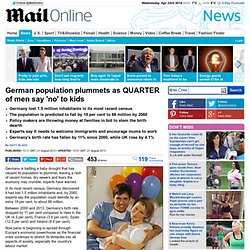 But experts say it is not working Germany is battling a baby drought that has caused its population to plummet, leaving a rash of vacant homes, dry sewers and fears the economy may crumble, experts have warned. In its most recent census, Germany discovered it had lost 1.5 million inhabitants and, by 2060, experts say the population could dwindle by an extra 19 per cent, to about 66 million. Germany’s prudence is Europe’s poison. Bundesbank to retrieve $200bn of gold from Paris and New York. By Rachel Rickard Straus Published: 10:55 GMT, 16 January 2013 | Updated: 12:13 GMT, 16 January 2013 Germany is set to retrieve its gold reserves held abroad, in a move critics fear could trigger a contagion of mistrust among the world’s central banks. 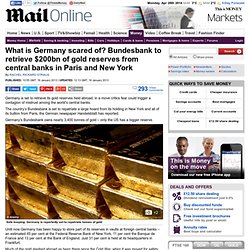 The country’s Bundesbank is set to repatriate a large hoard from its holding in New York and all of its bullion from Paris, the German newspaper Handelsblatt has reported. Eurozone crisis: who is pulling the strings in Europe? The callous cruelty of the EU is destroying Greece, a once-proud country. German bond auction 'disaster' rocks markets. Angela Merkel: We have a great deal to fear from German bossy boots. By Stephen GloverUPDATED: 11:16 GMT, 17 November 2011 Enormous power: Angela Merkel pulls the strings at the heart of Europe Germany has not been so powerful since 1941 when most of Europe was under her sway and her army was carving its way through the Soviet Union. 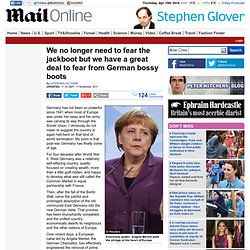 I obviously do not mean to suggest the country is again hell-bent on that kind of world domination. My point is that post-war Germany has finally come of age. For four decades after World War II, West Germany was a relatively self-effacing country, quietly focused on creating wealth, more than a little guilt-ridden, and happy to develop what was still called the Common Market in equal partnership with France.

Germany's economic colonisation of Europe. By Simon HefferUPDATED: 00:02 GMT, 8 November 2011 The elaborate pretence that the European Union and its stricken currency will shortly be saved after some little local difficulties is now becoming ever more desperate. 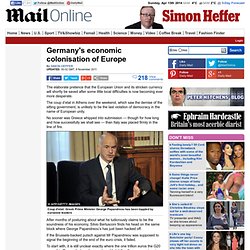 The coup d’etat in Athens over the weekend, which saw the demise of the sitting government, is unlikely to be the last violation of democracy in the name of European unity. No sooner was Greece whipped into submission — though for how long and how successfully we shall see — than Italy was placed firmly in the line of fire. This doomed currency was meant to hold Europe together - but it's ripping it apart. By Gwyn PrinsUPDATED: 22:41 GMT, 5 November 2011 If a week is a long time in politics, we now know how much longer it can feel when the politics involve not one, but several nations with conflicting agendas. 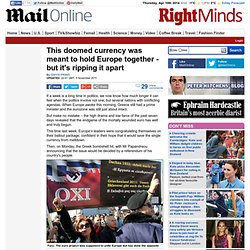 When Europe awoke this morning, Greece still had a prime minister and the eurozone was still just about intact. But make no mistake – the high drama and low farce of the past seven days revealed that the endgame of the mortally wounded euro has well and truly begun. This time last week, Europe’s leaders were congratulating themselves on their bailout package, confident in their hope that it would save the single currency from meltdown. Then, on Monday, the Greek bombshell hit, with Mr Papandreou announcing that the issue would be decided by a referendum of his country’s people. Fury: The euro project was supposed to unite Europe but has done the opposite.

A show of brute force in the new Europe: The move towards full fiscal union is now considered the euro's only way forward. When will the Empress of Europe and her French poodle ever learn? UPDATED: 00:49 GMT, 7 November 2011 There can be no doubt now about how brutally the European Union does its business, or how it treats the accepted norms of democracy as a tiresome obstacle to its rule. 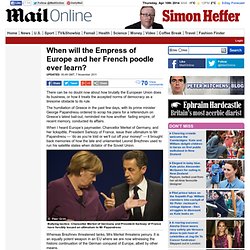 The humiliation of Greece in the past few days, with its prime minister George Papandreou ordered to scrap his plans for a referendum on Greece’s latest bail-out, reminded me how another fading empire, of recent memory, conducted its affairs. When I heard Europe’s paymaster, Chancellor Merkel of Germany, and her lickspittle, President Sarkozy of France, issue their ultimatum to Mr Papandreou — ‘do as you’re told or we’ll cut off your money!’ — it brought back memories of how the late and unlamented Leonid Brezhnev used to run his satellite states when dictator of the Soviet Union.