Lessons 2 & 3 Why did a dictatorship establish itself in Germany 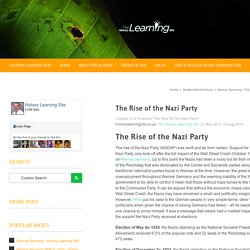 Support for Hitlerand his Nazi Party only took off after the full impact of the Wall Street Crash (October 1929) was felt onWeimar Germany. Up to this point the Nazis had been a noisy but far from important part of the Reichstag that was dominated by the Centre and Socialists parties along with the traditional nationalist parties found in Weimar at the time. However, the great leap in unemployment throughout Weimar Germany and the seeming inability of the Weimar government to be able to control it mean that those without hope turned to the Nazi Party or to the Communist Party.

It can be argued that without the economic chaos caused by the Wall Street Crash, the Nazis may have remained a small and politically insignificant party. Election of May 4th 1924: the Nazis (standing as the National Socialist Freedom Movement) received 6.5% of the popular vote and 32 seats in the Reichstag out of a total of 472 seats. GCSE Bitesize - Hitler's rise to power. Hitler Comes to Power. In the early 1930s, the mood in Germany was grim. 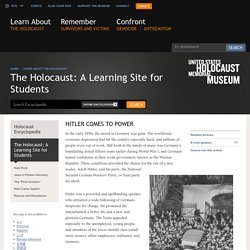 The worldwide economic depression had hit the country especially hard, and millions of people were out of work. Still fresh in the minds of many was Germany's humiliating defeat fifteen years earlier during World War I, and Germans lacked confidence in their weak government, known as the Weimar Republic. These conditions provided the chance for the rise of a new leader, Adolf Hitler, and his party, the National Socialist German Workers' Party, or Nazi party for short. Hitler was a powerful and spellbinding speaker who attracted a wide following of Germans desperate for change. He promised the disenchanted a better life and a new and glorious Germany. 2.4 Hitler Becomes Chancellor.