Anglo-Saxon Culture. The Anglo-Saxons were Germanic barbarians who invaded Britain and took over large parts of the island in the centuries following the withdrawal of the Roman Empire.

They were initially less gentrified than other post-Roman barbarian groups such as the Franks or Ostrogoths because they had less contact with Mediterranean civilization. The Anglo-Saxons were originally pagan in religion. The main group, from northwestern Germany and Denmark, was divided into Angles, Saxons, and Jutes. German tribal affiliations were loose and the original invaders included people from other Germanic groups as well. The%20Anglo-Saxon%20Period.ppt. Anglo-Saxon Poetry: Characteristics & Examples. In this lesson, we will review the general history of Anglo-Saxon society and its era. 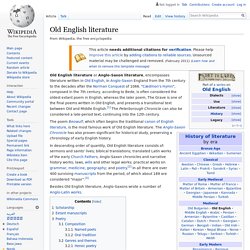 "Cædmon's Hymn", composed in the 7th century, according to Bede, is often considered the oldest extant poem in English, whereas the later poem, The Grave is one of the final poems written in Old English, and presents a transitional text between Old and Middle English. The Peterborough Chronicle can also be considered a late-period text, continuing into the 12th century. The poem Beowulf, which often begins the traditional canon of English literature, is the most famous work of Old English literature. The Anglo-Saxon Chronicle has also proven significant for historical study, preserving a chronology of early English history. Besides Old English literature, Anglo-Saxons wrote a number of Anglo-Latin works. Scholarship[edit] Extant manuscripts[edit] There are four major poetic manuscripts: Poetry[edit]

The year 1999 saw the 1100th anniversary of his death on October 26th, 899, at the age of about 50. The occasion is being marked with conferences and exhibitions in Winchester, Southampton and London, but the scale of celebrations will be modest compared with those which commemorated his millenary, and culminated in the unveiling by Lord Rosebery of his statue in Winchester.

Alfred’s reputation still stands high with historians, though few would now want to follow Edward Freeman in claiming him as ‘the most perfect character in history’ (The History of the Norman Conquest of England, 5 volumes, 1867-79). Alfred is someone who has had greatness thrust upon him. How and why did he acquire his glowing reputation, and how does it stand up today? Anglo-Saxon literature: Prose. Old English literary prose dates from the latter part of the Anglo-Saxon period.

Prose was written in Latin before the reign of King Alfred (reigned 871–99), who worked to revitalize English culture after the devastating Danish invasions ended. As hardly anyone could read Latin, Alfred translated or had translated the most important Latin texts. He also encouraged writing in the vernacular. ANGLO-SAXON PROSE. In all language ,poetry made its appearance before prose ,and that was also true about Anglo-Saxon prose.Anglo-Saxon prose ,however ,fared much better than its counterpart -Anglo-Saxon poetry .In fact English literary prose came actually as late as nineteenth century under king Alfred's patronization.Anglo-Saxon poetry was archaic and a bit complicated ,but Anglo -Saxon prose was rather comparatively modern and simple. 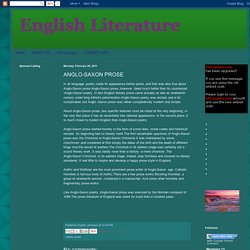 About Anglo-Saxon prose ,two specific features must be noted at the very beginning .In the very first place it has an essentially has national appearance .In the second place ,it is much closer to modern English than Anglo-Saxon poetry. Aeifric and Wulfstan are the most prominent prose writer of Anglo-Saxon age .Catholic Homilies is famous book of Aeifric.There are a few prose works Blickling Homilies ,a group of nineteenth sermon ,contained in a manuscript ,And some other homilies and fragmentary prose works. Anglosaxon Literature and Prose - Beaming Notes. The Germanic forefathers of the English brought with them their own poetry but there is no evidence of them bringing any prose writings. 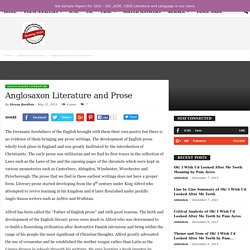 Although nearly all Old English poetry is preserved in only four manuscripts—indicating that what has survived is not necessarily the best or most representative—much of it is of high literary quality. Discribe the features of Anglo-Saxon Poetry in detail. - Homework Help. The poetry of the Anglo-Saxons is defined by the following characteristics: 1. 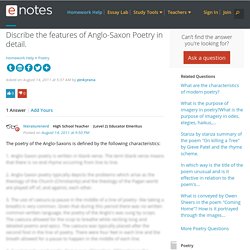 It is a time of war, of the breaking up of Roman Britannia into several separate kingdoms, of religious conversion and, after the 790s, of continual battles against a new set of invaders: the Vikings. Climate change had an influence on the movement of these new invaders to Britain: in the centuries after 400 AD Europe's average temperature was 1°C warmer than we have today, and in Britain grapes could be grown as far north as Tyneside. Warmer summers meant better crops and a rise in population in the countries of northern Europe. At the same time melting polar ice caused more flooding in low areas, particularly in what is now Denmark, Holland and Belgium. Anglo-Saxon. Anglo-Saxon, term used historically to describe any member of the Germanic peoples who, from the 5th century ce to the time of the Norman Conquest (1066), inhabited and ruled territories that are today part of England and Wales.

According to St. Bede the Venerable, the Anglo-Saxons were the descendants of three different Germanic peoples—the Angles, Saxons, and Jutes. By Bede’s account, those peoples originally migrated from northern Germany to the island of Britain in the 5th century at the invitation of Vortigern, a ruler of Britons, to help defend his kingdom against marauding invasions by the Picts and Scotti, who occupied what is now Scotland. Archaeological evidence suggests that the first migrants from the Germanic areas of mainland Europe included settlers from Frisia and antedated the Roman withdrawal from Britain about 410 ce. The Anglo-Saxon Hero. By Christopher Garcia In Anglo-Saxon culture and literature, to be a hero was to be a warrior.

A hero had to be strong, intelligent, and courageous. Warriors had to be willing to face any odds, and fight to the death for their glory and people.