Anglo-Saxon Clothes and Jewellery. An Anglo-Saxon lady wore: a loose gown fastened round her waist with a girdle;a full-length, sleeved tunic; a mantle or cloak around her shoulders;a hood over her head. 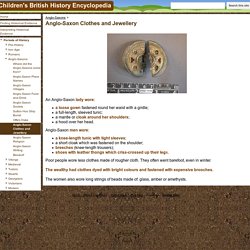 Anglo-Saxon men wore: a knee-length tunic with tight sleeves;a short cloak which was fastened on the shoulder;breeches (knee-length trousers);shoes with leather thongs which criss-crossed up their legs. Poor people wore less clothes made of rougher cloth. They often went barefoot, even in winter. The wealthy had clothes dyed with bright colours and fastened with expensive brooches. The women also wore long strings of beads made of: glass, amber or amethysts. Anglo Saxon Armour. SUTTON HOO HELMET: This helmet was found in the ship-grave at Sutton Hoo. 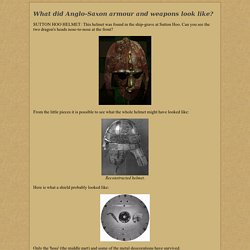 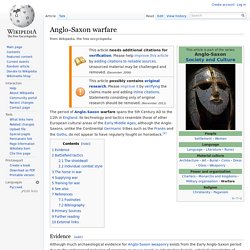 Its technology and tactics resemble those of other European cultural areas of the Early Middle Ages, although the Anglo-Saxons, unlike the Continental Germanic tribes such as the Franks and the Goths, do not appear to have regularly fought on horseback.[1] Evidence[edit] Although much archaeological evidence for Anglo-Saxon weaponry exists from the Early Anglo-Saxon period due to the widespread inclusion of weapons as grave goods in inhumation burials, scholarly knowledge of warfare itself relies far more on the literary evidence, which was only being produced in the Christian context of the Late Anglo-Saxon period. These literary sources are almost all authored by Christian clergy, and thus do not deal specifically with warfare; for instance, Bede's Ecclesiastical History of the English People mentions various battles that had taken place but does not dwell on them.

Battlefield tactics[edit] See also[edit] Anglo Saxon Religion - Saxon Gods. Days of the week The Anglo-Saxons were pagans when they came to Britain, but, as time passed, they gradually converted to Christianity. 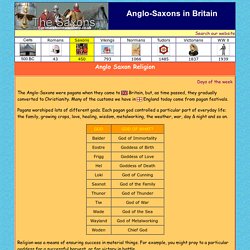 Many of the customs we have in England today come from pagan festivals. Pagans worshiped lots of different gods. Religion was a means of ensuring success in material things. Anglo Saxons clothes. Saxons.jpg (JPEG Image, 500 × 342 pixels) The Anglo Saxon Survival Guide. When the Anglo-Saxons Came to Britain what clothing did the wear? 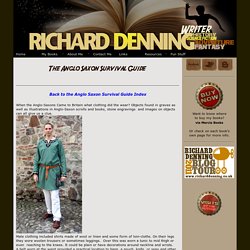 Objects found in graves as well as illustrations in Anglo-Saxon scrolls and books, stone engravings and images on objects can all give us a clue. Male clothing included shirts made of wool or linen and some form of loin-cloths. On their legs they wore woolen trousers or sometimes leggings. Over this was worn a tunic to mid thigh or even reaching to the knees. It could be plain or have decorations around neckline and wrists. A belt worn at the waist provided a practical location to hang a pouch, knife or seax and other accessories. Women would wear a tubular dress fastened at the shoulders. Women like men would usually have a belt, carry a small knife and pouch but also the senior female would carry keys to lock the store of food.

Who were the Anglo-Saxons? Anglo-Saxon clothes - women. 5th to 7th centuries Women wore an under-dress of linen or wool with long sleeves and a draw-string neck. 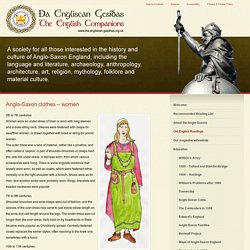 Sleeves were fastened with clasps for wealthier women, or drawn together with braid or string for poorer women. The outer dress was a tube of material, rather like a pinafore, and often called a ‘peplos’. A pair of shoulder-brooches or clasps held this onto the under-dress. A belt was worn, from which various accessories were hung. There is some linguistic evidence that shawls were worn, as well as cloaks, which were fastened either centrally or to the right shoulder with a brooch. Anglo-Saxon clothes - men. 5th and 6th centuries Men wore wool or linen hip-length undershirts with long sleeves, and probably loin-cloths. 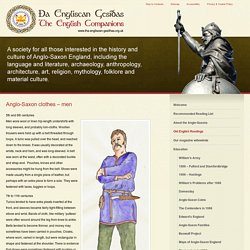 Woollen trousers were held up with a belt threaded through loops. A tunic was pulled over the head, and reached down to the knees. It was usually decorated at the wrists, neck and hem, and was long-sleeved. A belt was worn at the waist, often with a decorated buckle and strap-end. 7th to 11th centuries Tunics tended to have extra pleats inserted at the front, and sleeves became fairly tight-fitting between elbow and wrist. There was undoubtedly much variation according to region, period and status. Most clothes were made at home, and would almost certainly have undergone many repairs, or have been handed down, before being eventually cut up for rags or thrown away.

Underclothes were not usually dyed, but left in their natural colour, or perhaps sun-bleached. Did Anglo-Saxon ships have sails? An intriguing one, this. 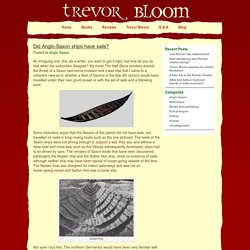 As a writer, you want to get it right, but how do you do that when the authorities disagree? My novel The Half-Slave revolves around the threat of a Saxon sea-borne invasion and it was vital that I came to a coherent view as to whether a fleet of Saxons in the late 4th century would have travelled under their own grunt-power or with the aid of sails and a following wind.

Some historians argue that the Saxons of this period did not have sails, but travelled on raids in long rowing boats such as the one pictured. The keels of the Saxon ships were not strong enough to support a sail, they say, and without a deep keel and mast-step such as the Vikings subsequently developed, ships had to be driven by oars. The remains of Saxon boats that have been discovered, particularly the Nydam ship and the Sutton Hoo ship, show no evidence of sails, although neither ship may have been typical of ocean-going vessels of the time. Sutton Hoo Not sure I buy this. Primary History - Anglo-Saxons.