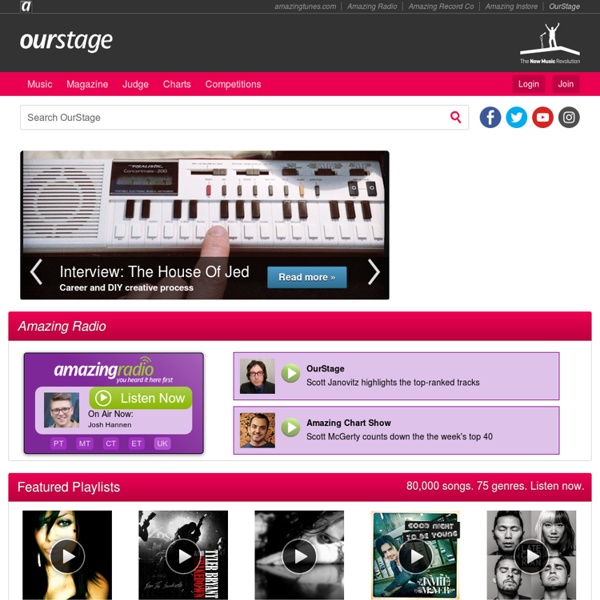 Top 100: Greatest Songs (of All Time) It’s hard to come up with a list of the 100 greatest songs of all time and not leave people out, or be called a “son of a bitch” and other unflattering things by your readers. Nevertheless, inStash goes where not even Rolling Stone magazine has dared to tread. While the famed music publication needed a top 500 to feel comfortable even undertaking such a task, inStash honors the legends of rockers past, country’s greatest crooners, and the songs of today with 100 must-haves for your iPod or MP3 player.

Android the Big Winner in Korea’s Ongoing Smartphone Boom – Footman's Frothings New figures from the Korea Communications Commission show that Korea now has more than 10 million registered smartphones. To put this in some perspective, in December 2009 (when the iPhone arrived), there were just 800,000, a number that had shot up to 2.47 million by last June, 7.22 million in December and just over 10 million by the 23rd of this month. Here’s a pie chart showing ownership by age group: Unsurprisingly, the majority of Korean smartphone users are in their 20s and 30s. Indeed, in that combined demographic, smartphone users now outweigh feature phone users by 60 percent to 30 percent. Elsewhere among the data is some very encouraging news for Google:

Songr Download free music directly from your desktop - no p2p, no ads, mp3s from 16 music search engines. Features:Download or listen to streaming music from 16 mp3 search engines Full album search Automatic conversion of results to direct links to listen with your favorite media player Audio extraction from YouTube videos Search by lyrics: Type some words and get the name of the song and an audio preview! Search by artist Download Songr 1.9.96 4 MB, XP sp3, Vista, 7, 8 Requires .NET Framework 3.5 No viruses, no spyware, no adware 10 Weird and Wonderful Women Musicians "There is nothing new under the sun," said King Solomon. He obviously hadn't met Nina Hagen. Or any of the other women on this list, all musicians with talent, originality, charisma and intelligence––not to mention a wicked sartorial style! These women are all their own persons, confident in their individuality, wherever it may take them. And, yes, they're all weird, but not in a contrived or derivative manner. That's just who they are.

Pandora Debuts on New York Stock Exchange It’s not every day that writing about music apps means discussing a $2.6 billion initial public offering. Pandora’s IPO valued the company, whose customizable streaming radio service is used by approximately one out of every ten Americans, at $2.6 billion dollars, or $16 per share under the symbol “P.” As the chart above shows (via Google, which has updated numbers), trading spiked sharply when the market opened, and the company’s value increased upwards of 40 percent in less than an hour. TechCrunch and others report that Pandora has 94 million users, but Evolver.fm recently learned that only around 30 million of those are active users of the service — not bad, considering that it’s only available in America, which has a population of about 307 million, many of whom aren’t music fans and/or don’t have broadband, a cellular data plan, a smartphone, or a Sonos. Now it’s worth even more. (Track Pandora’s stock price on Google.)

Why Daytrotter Why Daytrotter? Well, when we started Daytrotter in the early spring of 2006 it was created as a place of discovery for music lovers and a hole-in-the-wall-of-the-Heartland haven for passionate and inspiring musicians criss-crossing and cross-crissing the country and the world, hoping to find open and sympathetic ears. We're proud to say that Daytrotter has been the lifeblood or the beginning for thousands and thousands of artists through the years and the Daytrotter community consists of a knitting together of people, art and the musical honey that our hearts are drawn to. We use our studio here in Rock Island, Illinois, to capture pure musical magic on a daily basis and make those moments -- these important documents of a day and and a time -- available to the world to pick through and hold dear when they find something that they can't help but love. Since the beginning and to this day, we have recorded over 2000 sessions, with multiple new sessions being taped every day.

50 Greatest Guitar Solos Jimmy Page. Jack White. Jimi Hendrix: some of the music world's greatest ever axe-shredders (and that's only the Js). Fundamental to a band's sound, the guitarist can make or break a record and - if they're really something special - they can deliver a solo that elevates it to heights previously unimagined. Here, we celebrate those in the latter camp, who only needed six strings to change the world. "This song is literally one very long solo. iPhone and Galaxy S Spur Growth in South Korea’s Smartphone Market Just a year and a half ago, smartphones were nearly absent from South Korea's wireless market, but a smartphone boom hit the country last year following Korea Telecom’s (KT) introduction of iPhones. KT's move pushed other mobile operators like SK Telecom and LGU+ to raise their marketing spending and partner with smartphone manufacturers to try to claim a bigger chunk of the rapidly growing mobile data services market. Smartphones had been a hard sell in South Korea due to their lavish price tags and the lack of apps, but now, with desirable devices such as the iPhone and Samsung Electronics' Galaxy S available at more reasonable prices, the country is on the cusp of a mobile Internet explosion.

How To Read Guitar Tab Guitar tab or tablature is a very popular method of notating guitar music. What makes tab so popular is that, once you get the hang of it, it is very easy to read. In order to understand tab, you need to visualize a guitar neck as if you are playing the guitar and looking down on the neck. Tab consists of 6 horizontal lines that represent the strings of the guitar. The thickest string being the bottom most line and the thinnest string being the topmost. Multimedia Sixties 1968 Music - A retro nostalgia look at music 1968 Song of the year With an album behind them and an almost hit with Down on Me, Big Brother and the Holding Company with Janis Joplin made a big splash at the 1967 Monterey Pop Festival, and the next year came the hit album Cheap Thrills with the big hit single Piece of My Heart and of course the unforgettable album cover by Robert Crumb. Piece of my Heart was so big a hit that Joplin left Big Brother to go on her own before the year ended Billboard Top 40 of 1968

Using Game Mechanics in UX Design Have you noticed that more and more websites are using game mechanics to create more enjoyable experiences? Principles of game design can serve UX designers today more than ever, because - 1 - brands realize the importance of interacting with users and keep them engaged and - 2- current web technologies allow developers build interfaces that support rich interaction scenarios in real time. Game mechanics will rock the web.

10½ Favorite Albums of 2012 by Maria Popova By popular demand, here is a music equivalent to complement those favorite books of 2012 — a highly subjective and hopelessly non-exhaustive selection of the 10 or so albums on heaviest rotation this year, many of which you might recognize from past Literary Jukebox installments. My Head Is An Animal (iTunes; UK) by Of Monsters and Men Release date: April 3, 2012 Infographic Of The Day: A Dynamic Map Of The Indie-Music Universe The debate around self-driving cars has continued to escalate as they hit the road this month in Pittsburgh. But what about other kinds of vehicles that could benefit from similar technology? MIT's Senseable City Lab and AMS, the Amsterdam Institute for Advanced Metropolitan Solutions, have come together to explore the idea of self-driving boats. Along with researchers from Delft University of Technology and Wageningen University and Research, the City of Amsterdam, and the city's public water utility company Waternet, the two groups recently launched a new project called Roboat, which will deploy a fleet of autonomous vessels into the extensive canals and waterways of the Dutch capital.

The songs of summer Memorial Day Weekend fills us with restless anticipation of how we will spend the long, hot days ahead, but it also brings fond memories of summers past, each one marked by a ubiquitous song that still has the power to bring us back to that time. Travel through the last 100 years to discover which summer songs were either released or peaked in popularity during the summer of their respective years. Some are about the summer or the stuff of summer: parties, picnics, fleeting love, nostalgia or fun. Some have that summer feeling in sound alone. Many are relevant to their times. Some have become standards.