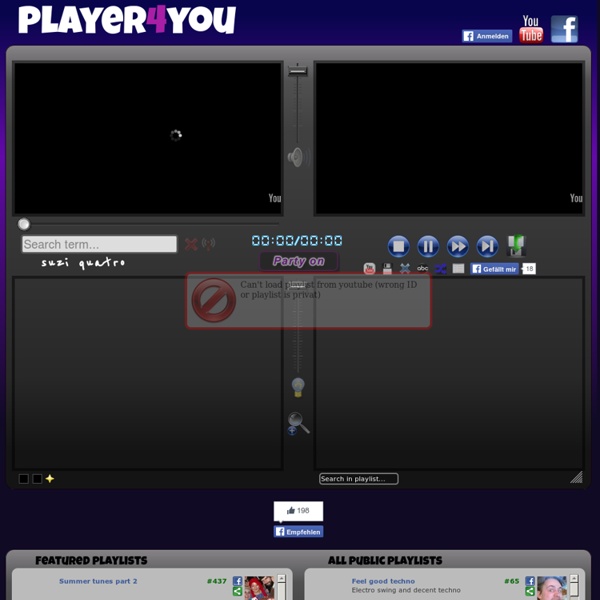 Auditorium Play the first game we ever created together. Auditorium hit the scene in 2009. Since then, its sleek design, vibrant colors, and iconic soundtrack have captured the imagination of thousands of players worldwide. The 80's karaoke songs and MP3 Backing tracks RedKaraoke 80's Music 80s karaoke songs and backing tracks. Enjoy listening and recording with this epic decade of music. WeVideo Sign Up Welcome back! Facebook Google Office 365

Aztec Gods and Goddesses - Ancient / Classical History Huitzilopochtli Huitzilopochtli was the Aztec god of the obsidian knife who sprang forth from his mother's belly to kill his siblings. Quetzalcoatl Quetzalcoatl was the Aztec creator god and god of the wind who was depicted as a bearded old man. Tezcatlipoca Tezcatlipoca - The Mirror That Smokes Anxiety and trouble follow in his wake.

Piki.fm Lets You Collect Music to Make Radio for Other People By now, you’ve probably heard of Piki.fm (free for the web and iOS), the latest venture from the creators of the breakthrough music app Turntable.fm, which powers internet radio streams based on your friends’ music. Since Piki’s much anticipated public release in April, some have questioned the necessity of this service. With heavy hitters Twitter and Google recently joining the already crowded music streaming market, and rumors of a forthcoming service from Apple, does Piki have a shot at success? Set sail aboard the National Geographic Sea Bird on an in-depth and wide-ranging photo expedition through Alaska’s famed Inside Passage. Photograph the glacially carved cliffs of Misty Fiords; the icescapes of Glacier Bay; and the wildlife-rich waters of Icy Strait, home to whales, puffins, and Steller sea lions. Explore spectacular fjords by expedition landing craft and kayak, and go on photo hikes through old-growth forests. Capture it all with the help of our National Geographic photo expedition team.

Minilogs Lets You ‘Playlist The Web’ We’re on a quest for the best ways to collect music, which recently saw us examine Later.fm, an InstaPaper-style web app that makes music collection in these difficult times a little bit easier. Minilogs (free; web) was designed to solve the same problem of collecting music on the web, with a little more versatility. By clicking on a bookmarklet (as with Later.fm), using the Chrome extension, or entering a URL, the app lets you save songs and videos you’ve found on your web travels for future listening, so you don’t lose track of the stuff you like during your busy day. To keep your findings (which can also include non-music things) organized, you can save music in different lists, or minilogs. An included media player lets you stream them; when you do, you can “like” your favorite songs or discard the ones you don’t actually like, which means Minilogs works for auditioning as well as collecting.

Aztec Calendar : Mexico Culture & Arts Dale Hoyt Palfrey Mexica/Aztec Calendar Systems The Civil Calendar The solar year was the basis for the civil calendar by which the Mexicas (Aztecs) determined the myriad ceremonies and rituals linked to agricultural cycles. The calendar was made up of 18 months, each lasting 20 days. The months were divided into four five-day weeks. Beth Ditto & The Shoes - Cerrone's Supernature Beth Ditto & The Shoes Album: Best Of Cerrone Productions Cerrone, a trained drummer and disco phenomenon who sold more albums than many other artists, saw his career magnified by America but also twisted by France which quickly reduced him to a style, disco music. From his first album in 1976 to his 7th, he had an exemplary sense of creativity and a free-spirit vision. Against many advice, he was never reluctant to compose long and pure trance disco tracks, not exactly radio-friendly, but which did well because they encapsulated the hedonism of the day.

Aztec Civilization The Aztec Empire flourished between c. 1345 and 1521 CE and, at its greatest extent, covered most of northern Mesoamerica. Aztec warriors were able to dominate their neighbouring states and permit rulers such as Motecuhzoma II to impose Aztec ideals and religion across Mexico. Highly accomplished in agriculture and trade, the last of the great Mesoamerican civilizations was also noted for its art and architecture which ranks amongst the finest ever produced on the continent.

Music Songs Player Come Together The Beatles Come Together / Dear Prudence / Cry Baby Cry Come Together/Dear Prudence/Cry Baby Cry [transition] Tarlton Law Library - Aztec and Maya Law - online exhibit The Aztec empire was made up of a series of city-states known as altepetl. Each altepetl was ruled by a supreme leader (tlatoani) and a supreme judge and administrator (cihuacoatl). The tlatoani of the capital city of Tenochtitlan served as the Emperor (Huey Tlatoani) of the Aztec empire. The tlatoani was the ultimate owner of all land in his city-state, received tribute, oversaw markets and temples, led the military, and resolved judicial disputes. The tlatoani were required to be from the noble class and of royal lineage. Once a tlatoani was selected, he served his city-state for life.