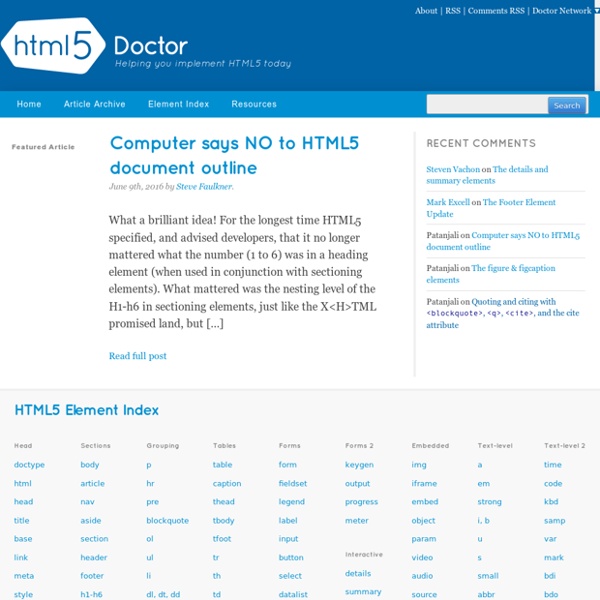 Rotating Words with CSS Animations Using CSS Animations we will change or rotate some parts of a sentence. View demo Download source In today’s tutorial we’ll create another typography effect. The idea is to have some kind of sentence and to rotate a part of it.

How cards are taking over Web design From news sites to real estate, cards are everywhere on the Web today. Those little rectangles full of inclusive images and text have been so successful in Web design that they’ve almost become a default option when it comes to balancing clear aesthetics with simple usability. But don’t mistake trendiness for usefulness – there’s a reason cards are so popular. Static Maps API V2 Developer Guide   The Google Static Maps API lets you embed a Google Maps image on your web page without requiring JavaScript or any dynamic page loading. The Google Static Map service creates your map based on URL parameters sent through a standard HTTP request and returns the map as an image you can display on your web page. New! The Google Static Maps API Usage Limits have changed. Creating an API key and including it in your request allows you to track usage in the Google Developers Console, and to purchase additional quota if required.

Coding A HTML 5 Layout From Scratch - Smashing Magazine HTML5 and CSS3 have just arrived (kinda), and with them a whole new battle for the ‘best markup’ trophy has begun. Truth to be told, all these technologies are mere tools waiting for a skilled developer to work on the right project. As developers we shouldn’t get into pointless discussions of which markup is the best. HTML Entities Examples n/a: code not found or existing...yet. If the code result is the same as the code, the character/entity is not supported...yet.Derivation and Printing Notes. Return to Top of page. kurthlab personal cargo In the future it will be less about technology and more about content. Right now as it stands everything is focused on technology and the products that encompass them, rather than on the human factor. We have a myriad of products all of which having to have their own preferences set, their own differing complex interfaces that need to be releanred for each individual device. Reading an article on our mobile devices and then continue reading it where we left off when entering our office, the same with movies, or music, having a seamless experience from car to home to office, all of which with an easy intuitive way to get to it, recall it, and share it is not part of our reality.

The future of flat design Despite its sudden popularity, flat design is not just some fly-by-night trend. It’s a substantial approach to Web design that’s rooted in practicality, and necessity. The balance between aesthetics and usability reflected in flat design 2.0 demonstrates that the principles behind the philosophy have true staying power. Photo credit: Reebok But how does it work? HTML5 Presentation Combine both technologies to allow direct image access + manipulation Putting it together for local image reading + manipulation.

Layouts HTML layout is very basic. Not many options exist with the body tag alone. Tables, on the other hand, are the bread and butter of HTML layouts. Any element may be placed inside of a table, including tables themselves! HTML Code: <table id="shell" bgcolor="black" border="1" height="200" width="300"><tr><td><table id="inner" bgcolor="white" height="100" width="100"><tr><td>Tables inside tables! CSS Tools: Reset CSS The goal of a reset stylesheet is to reduce browser inconsistencies in things like default line heights, margins and font sizes of headings, and so on. The general reasoning behind this was discussed in a May 2007 post, if you're interested. Reset styles quite often appear in CSS frameworks, and the original "meyerweb reset" found its way into Blueprint, among others. The reset styles given here are intentionally very generic. There isn't any default color or background set for the body element, for example. I don't particularly recommend that you just use this in its unaltered state in your own projects.