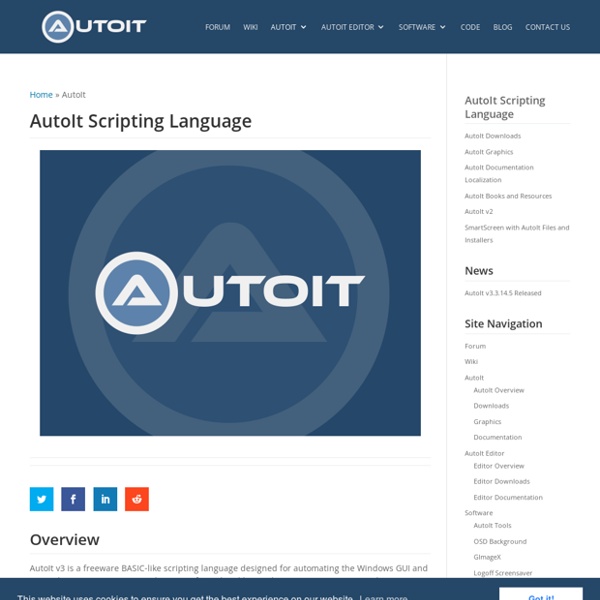 Overview AutoIt v3 is a freeware BASIC-like scripting language designed for automating the Windows GUI and general scripting. It uses a combination of simulated keystrokes, mouse movement and window/control manipulation in order to automate tasks in a way not possible or reliable with other languages (e.g. VBScript and SendKeys). AutoIt is also very small, self-contained and will run on all versions of Windows out-of-the-box with no annoying “runtimes” required! AutoIt was initially designed for PC “roll out” situations to reliably automate and configure thousands of PCs. AutoIt has been designed to be as small as possible and stand-alone with no external .dll files or registry entries required making it safe to use on Servers. Also supplied is a combined COM and DLL version of AutoIt called AutoItX that allows you to add the unique features of AutoIt to your own favourite scripting or programming languages! Download Take me to the downloads page! Features Standalone and Small

Scripting Automation Tools - Network Automation "For us, AutoMate combines two very important functionalities: job scheduling/triggering and automation. In our initial effort when we attempted to use Launchpad and AutoIT, we were trying to combine Launchpad's job scheduling functionality with AutoIT's automation capabilities. This was a mistake. What we really needed was one powerful tool that had both the triggering and automation capabilities. In our solution, AutoMate is central to application integration - it orchestrates three critical applications used extensively at MD Anderson Cancer Center, and coordinates thousands of file and data transfers." Since 2002, the MD Anderson Cancer Center has developed and deployed over 80 automation tasks with AutoMate.

An Introduction to Using TPTP's Automated GUI Recorder Important: This user guide is assumed to be used with TPTP 4.1 The following document provides an overview of using a GUI recorder and playback tool that is developed under the TPTP test framework. This tool allows users to record GUI actions in the Eclipse platform and play them back to verify the functionality of their product. It is meant to allow Eclipse developers to automate regression tests that often require many resources to perform repetitive tasks to verify basic functionalities. TPTP's Automated GUI Recorder (AGR) works by registering listeners with the SWT's display instance to record all incoming UI events that directly correspond to user's actions. iTestBot – new idea in test automation Idea is not new at all but cute implementations must pay our attention. iTestBot made by AKS-Labs is one of these solutions that I’m looking for. Click “Play” at the end of the day and read tests report next morning ! without mass number of test scenarios, performed by several testers who base on “click and forgot” methodology, possible ? To realize that, perfect idea we must have some tools: to manage test cases / scriptsexecutor of the scriptssome mechanism to gain reports and provide summary

Test Run: UI Automation with Windows PowerShell Test Run UI Automation with Windows PowerShell Dr. James McCaffrey The Interface Construct in C# Table of Contents Abstract This article describes the use of the interface construct in C#. iKey for Mac - Work less and accomplish more Adam C. Engst is the author of the “Take Control of yKey” Manual. His manual helps you install yKey and provides a step by step usage tutorial for this essential software. MQTT for Beginners Tutorials and Course This is a collection of tutorials arranged as a course and is for complete beginners wanting to understand the fundamentals of the MQTT protocol and how to use it in IOT Projects. The course consists of a series of tutorials, videos and examples that take you through the basics of the MQTT protocol, and then the important features. At the end of the course you should have a very good understanding of MQTT and the most important features. Although many of the tutorials include examples written in Python no programming will be required.