Windows Commands: Think You Know It All !? 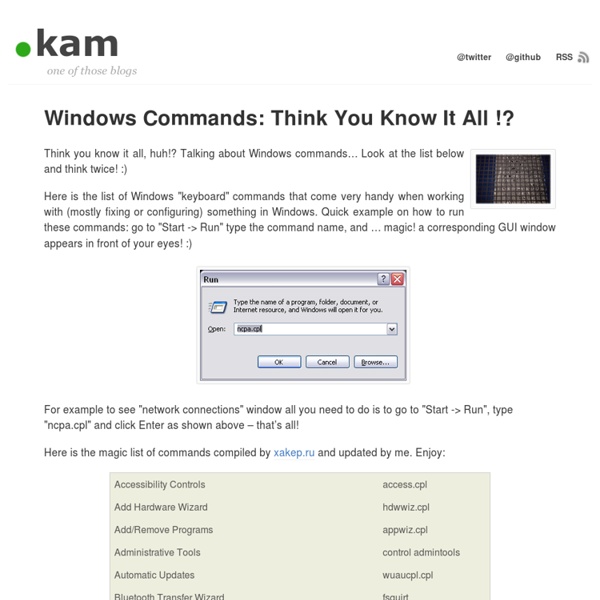 - StumbleUpon Blindly searching the web for cracks & keygens is about as smart as using Limewire to search for antivirus software - something not well-advised. Undoubtedly and unfortunately, the number of crack sites with overtones of a malicious agenda heavily outweigh sites that just want to serve up the honest goods. Having said that, there actually are quite a few creditable ‘crack’ sites that won’t try to bombard you with full-screen popup ads, or commandeer your computer into a spam-loving Kraken or Srizbi Botnet army. We’ve done the hard work for you, and present a list of “clean” crack sites for all the latest warez. Be aware that the site reviews herein only include information about each site, not the contents of the ‘cracks’ themselves. Always use a reputable antivirus and antispyware program on cracks & keygens before using them. Recommended (Clean) Crack Sites While these websites are deemed adware/malware free, always be sceptical of their “affiliate links” to other crack sites.

Mark Jenkins // Street Installations Besançon Rome Rio de Janeiro Tudela London Dublin Moscow Winston-Salem Seoul Royan Bordeaux Puerto del Rosario Barcelona Malmö Washington DC Washington, DC The Open Organisation Of Lockpickers :: Meetings This is a repository of the most up-to-date versions of Deviant's lock diagrams and animations. Seen in all of the TOOOL educational materials and slide decks, these files are all released under the Creative Commons license. You are free to use any of them for non-commercial purposes, as long as they are properly attributed and the same freedom for others is maintained in all derivative works. Please note that these diagrams have evolved and developed over time. While Deviant is still proud of the older versions of his images, if you still have copies of legacy material they should all be replaced with the latest versions available here. Each image shown below in thumbnail form can be accessed in high resolution individually, or you can obtain the full set from the zip archive at the bottom of this page. Lock Basics and Mechanical Operation How pin tumblers are arranged and how locks operate (or fail to) with conventional keys Introduction to Lockpicking Manipulation-Resistant Locks

Dokkōdō The "Dokkōdō" [ (Japanese: 独行道?); "The Path of Aloneness", "The Way to Go Forth Alone", or "The Way of Walking Alone"] is a short work written by Miyamoto Musashi (宮本 武蔵) a week before he died in 1645. It consists of either nineteen or twenty-one precepts; precepts 4 and 20 are omitted from the former version. Precepts[edit] References[edit] The 48 Laws of Power Background[edit] Greene initially formulated some of the ideas in The 48 Laws of Power while working as a writer in Hollywood and concluding that today's power elite shared similar traits with powerful figures throughout history.[5] In 1995, Greene worked as a writer at Fabrica, an art and media school, and met a book packager named Joost Elffers.[4][8] Greene pitched a book about power to Elffers and six months later, Elffers requested that Greene write a treatment.[4] Although Greene was unhappy in his current job, he was comfortable and saw the time needed to write a proper book proposal as too risky.[10] However, at the time Greene was rereading his favorite biography about Julius Caesar and took inspiration from Caesar's decision to cross the Rubicon River and fight Pompey, thus inciting the Great Roman Civil War.[10] Greene would follow Caesar's example and write the treatment, which later became The 48 Laws of Power.[10] He would note this as the turning point of his life.[10]