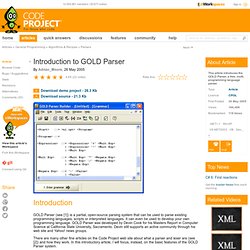 It can even be used to develop your own programming language. GOLD Parser was developed by Devin Cook for his Masters Report in Computer Science at California State University, Sacramento. Devin still supports an active community through his web site and Yahoo! News groups. There are many other fine articles on the Code Project web site about what a parser and lexer are (see [2]) and how they work. Background The first time you learn about a parser or lexer, you are immediately linked to the classic Lex and YACC tools developed many years ago. For those using .NET, there are really only two choices; Grammatica, which was recently ported from its original Java implementation to C# and GOLD Parser. The GOLD Parsing System The GOLD Parsing system consists of three phases; Phase 1: Creating the Grammar About the Code Oh! 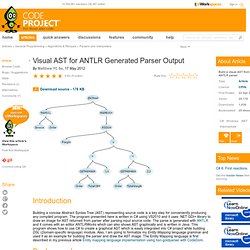 The program presented here is written in C# using VS2010 and it uses .NET GDI+ library to draw an image for AST returned from parser after parsing input source code. The parse is generated with ANTLR and it comes with an editor ANTLRWorks which can also shows AST graphically and is written in Java. This program shows how to use C# to create a graphical AST which is easily integrated into C# project while building DSL (Domain-specific language) module. Background ANTLR Tree Grammar Before talking about the drawing program, I would like to discuss on the tree grammar when defining parser with ANTLR. The Compiler Generator Coco/R. Hanspeter Mössenböck, Markus Löberbauer, Albrecht Wöß, University of Linz Last update: July 25, 2011 Documentation | Coco/R for C#, Java, C++, F#, VB.Net, Oberon, other languages | Contributions | Cookbook | Tools | Mailing list Coco/R is a compiler generator, which takes an attributed grammar of a source language and generates a scanner and a parser for this language. 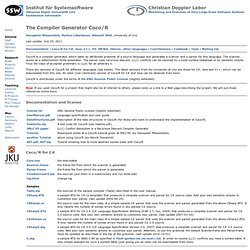 The scanner works as a deterministic finite automaton. The parser uses recursive descent. There are versions of Coco/R for different languages (see below). Coco/R is distributed under the terms of the GNU General Public License (slightly extended). New: If you used Coco/R for a project that might also be of interest to others, please send us a link to a Web page describing the project. Documentation and license. Corporation - Parsing technologies and parser generator. 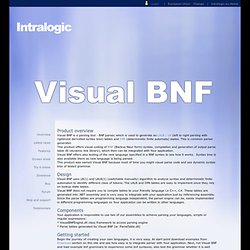 This is common parser generator. This product offers visual coding of BNF (Backus Naur form) syntax, compilation and generation of output parse table dll (dynamic link library), which then can be integrated with Your application. Visual BNF offers also testing of the new language specified in a BNF syntax to see how it works. Syntax tree is also available there as new language is being parsed. This product was named Visual BNF because most of time you might visual parse code and see dynamic syntax tree of tested grammar. Design Visual BNF uses LR(1) and LALR(1) (switchable manually) algorithm to analyze syntax and deterministic finite automaton to identify different class of tokens. Components Getting started Begin the journey of creating your own languages, it is very easy. World.std.com/~compres/ A Tiny Parser Generator v1.2. 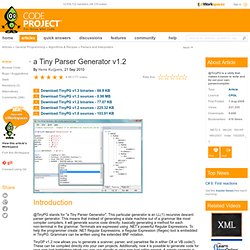 TinyGP v1.2 now allows you to generate a scanner, parser, and parsetree file in either C# or VB code(!). In this article, I will not go into depth about compiler theory, and a basic understanding of compilers and grammars is required. Nowadays, with the availability of numerous compiler compilers, it becomes hard to think of a new name for a compiler compiler. Background Since there are already a number of compiler compilers out there, you might wonder why write another one? The SLK Parser Generator supports C, C++, Java, and C#, optional backtracking, free. Lexical Analyzer and Parser Generator. Gardens Point Parser Generator - Home. ANTLR. Gardens Point LEX - Home. C# Lex Manual. Last changed on 12.5.2005 Samuel Imriska Distributed System Group Technical University Vienna based on JLex v1.2 by Elliot Berk Table of Contents. 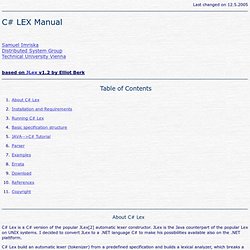