How to attach a mask point to a layer in After Effects? - Fxfx.net. Sometimes animating mask path can be really difficult if you are trying to animate it to follow an object. 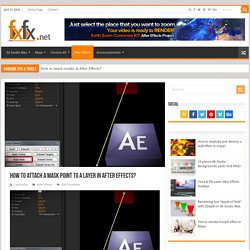 This tip may be used in motion graphic work to focus moving object (maybe tracked). Let’s start! First of all, it is impossible to solve that problem by After Effects itself, so we are going to get some help by a script. Script name is; RotAE rotoscoping script. I’m giving its download link and information at bottom. Scriptui-2-6. Video: Pro Video Coalition - After Effects ExtendScript Training: Ep. 17 Part 1, 2, and 3 by David Torno. Welcome to episode 17 of the After Effects ExtendScript Training series. 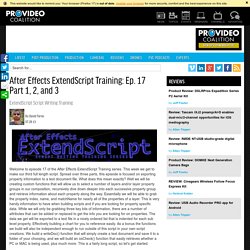 This week we get to make our third full length script. Spread over three parts, this episode is focused on exporting property information to a text document file. What does this mean exactly? Well we will be creating custom functions that will allow us to select a number of layers and/or layer property groups in our composition, recursively dive down deeper into each successive property group and retrieve information about each property along the way.

Essentially we will be able to grab the property index, name, and matchName for nearly all of the properties of a layer. If you missed any of the previous episodes in this series, follow the links below. Previous episodes in the series: Episode 1 (Intro) Episode 2 (Javascript Basics p1) Episode 3 (Javascript Basics p2) Episode 6 (Collecting data into an Array() / Changing values / Various tips) Episode 7 (Create new comps and folders / Create Null, Solid, and Text layers) QueueRender. After Effects Javascript API - Adobe After Effects Wiki. These are standard and common functions used by After Effects. 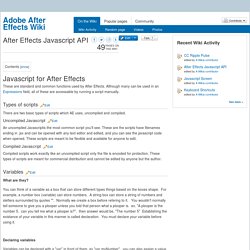 Although many can be used in an Expressions field, all of these are accessable by running a script manually. Types of scripts Edit There are two basic types of scripts which AE uses, uncompiled and compiled. Uncompiled Javascript Edit. RenderQueueItem Object. View topic - Script UI Helpers. There seems to be some interest in facilitating the building of UIs. 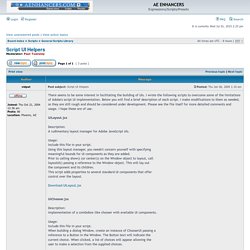 I wrote the following scripts to overcome some of the limitations of Adobe's script UI implementation. Below you will find a brief description of each script. I make modifications to them as needed, so they are still rough and should be considered under development. Please see the file itself for more detailed comments and usage. Downloads. After Effects Scripts, Courtesy of CRG. Armored Squirrel » Scripts. Cluster v2.0 for After Effects - Plugins Reviews and Download free for CG Softwares. [ #AfterEffects ] Cluster is a script for After Effects which allow you connect the objects in a couple of clicks. 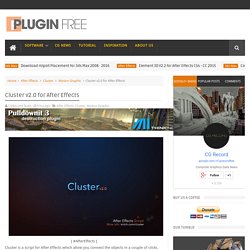 All connections is parametric so you can change them in a realtime. The script included 3 basic connections: linear, parent and recursion. 31 Essential Scripts from AEScripts.com. If you have never used scripts before, you are missing out. 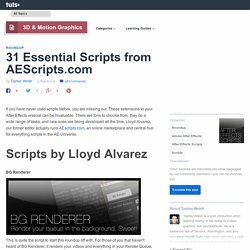 These extensions to your After Effects arsenal can be invaluable. There are tons to choose from, they do a wide range of tasks, and new ones are being developed all the time. Lloyd Alvarez, our former editor actually runs AEscripts.com, an online marketplace and central hub for everything scripts in the AE Universe. This is quite the script to start this roundup off with. For those of you that haven't heard of BG Renderer, it renders your videos and everything in your Render Queue, in the background... pretty straightforward. 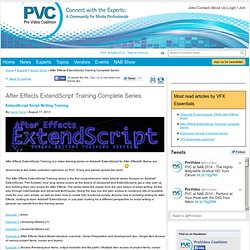 Below are direct links to the entire collection right here on PVC. Enjoy and please spread the word. The After Effects ExtendScript Training series is the first comprehensive video tutorial series focused on Adobe® ExtendScript. This fourteen hour long series covers all the basics of Javascript and ExtendScript to get a new user up and building their own scripts for After Effects. The series takes the viewer from the very basics of script writing, all the way through intermediate and advanced techniques. JavaScript. After Effects Scripts. This download contains scripts for editing keyboard shortcuts (KeyEd Up), launching scripts (Launch Pad), creating project folder hierarchies (Folder Setup), converting Adobe Swatch Exchange (.ase) files (Swatch You Want, kuler Shapes), modifying a composition's motion blur settings interactively (Active Shutter), doubling and arranging the layers in a composition for comparison purposes (Double-Up), setting up layers in After Effects for Encore menus (Encore Tools), separating shapes in a shape layer (Explode Shape Layer), and adjusting the alternate RAM preview setting interactively (Purview). 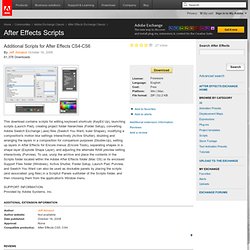 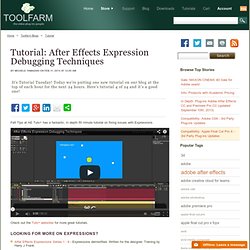 Today we’re putting one new tutorial on our blog at the top of each hour for the next 24 hours. Here’s tutorial 4 of 24 and it’s a good one! Felt Tips at AE Tuts+ has a fantastic, in depth 50 minute tutorial on fixing issues with Expressions. What's your favourite AE Script? » helloluxx. I’m not sure if you use scripts in your day to day workflow, whether in After Effects, Cinema4D, or what ever application you choose to abuse. 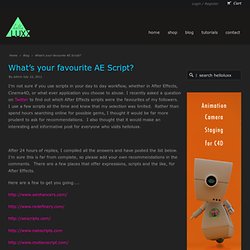 I recently asked a question on Twitter to find out which After Effects scripts were the favourites of my followers. I use a few scripts all the time and knew that my selection was limited. Rather than spend hours searching online for possible gems, I thought it would be far more prudent to ask for recommendations. I also thought that it would make an interesting and informative post for everyone who visits helloluxx. After 24 hours of replies, I compiled all the answers and have posted the list below. Here are a few to get you going….. For those of you that would like to get your hands dirty and learn the art of scripting.