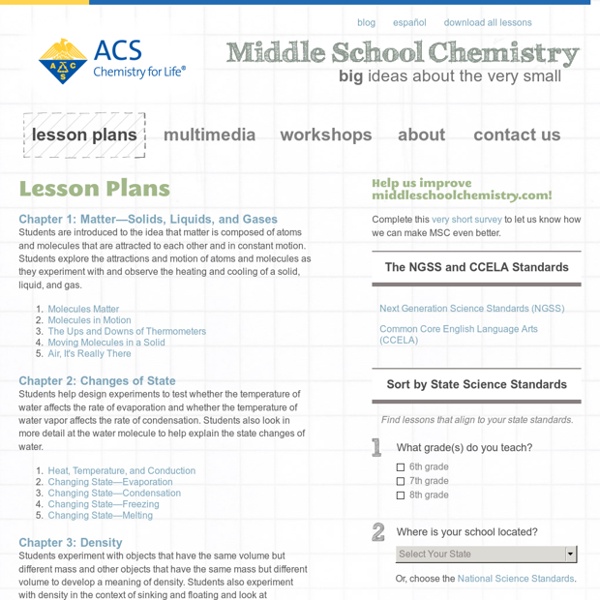 Chapter 1: Matter—Solids, Liquids, and Gases Students are introduced to the idea that matter is composed of atoms and molecules that are attracted to each other and in constant motion. Students explore the attractions and motion of atoms and molecules as they experiment with and observe the heating and cooling of a solid, liquid, and gas. Chapter 2: Changes of State Students help design experiments to test whether the temperature of water affects the rate of evaporation and whether the temperature of water vapor affects the rate of condensation. Students also look in more detail at the water molecule to help explain the state changes of water. Chapter 3: Density Students experiment with objects that have the same volume but different mass and other objects that have the same mass but different volume to develop a meaning of density. Chapter 4: The Periodic Table & Bonding Chapter 5: The Water Molecule and Dissolving Chapter 6: Chemical Change Project Based Lessons

States of Matter ABCya is the leader in free educational computer games and mobile apps for kids. The innovation of a grade school teacher, ABCya is an award-winning destination for elementary students that offers hundreds of fun, engaging learning activities. Millions of kids, parents, and teachers visit ABCya.com each month, playing over 1 billion games last year. Apple, The New York Times, USA Today, Parents Magazine and Scholastic, to name just a few, have featured ABCya’s popular educational games. ABCya’s award-winning Preschool computer games and apps are conceived and realized under the direction of a certified technology education teacher, and have been trusted by parents and teachers for ten years. Questioning Techniques for the Classroom No opt out is an all or nothing strategy that requires the students to answer questions that are asked of them correctly. Incorrect or partially answered questions should be corrected by other students who have their hands raised, continuing until the right answer is given. If an incorrect answer is given then that student will continue to be asked questions until a correct answer is given. Student Who Refuses to Try – If a student replies I don’t know or I don’t want to answer, turn to another student and ask them the same question, once you achieve the correct answer from another student, turn back to the first student who could not answer the question and ask them if they can answer now.

Atomic Structure 1. Grades 7-10 2. Solid State of Matter These crystals of the mineral pyrite are a good example of a solid. Click on image for full size Courtesy of Corel Solid is one of the four common states of matter. The three others are gas, liquid, and plasma. There are also some other exotic states of matter that have been discovered in recent years. Validity vs Reliability vs Accuracy in Physics Experiments Introduction to Validity, Reliability, and Accuracy of Experiments Practical assessments are designed to test your practical skills: how well you can design and carry out an experiment and analyse results, but also your understanding of the purpose of the experiment and its limitations. One aspect of this is the reliability, validity, and accuracy of the experiment.

Science Fair Project Resource Guide If you’ve never done a science fair project before, DON’T PANIC! The IPL’s Science Fair Project Resource Guide will help you through the whole project by guiding you to a variety of excellent web resources. We recommend that you use the buttons above and go through The Steps in number order, at least the first time. A Matter of State A plastic bottle is compressed following a flight Photo Credit: Korte Purpose To help students understand that particle movement changes as a substance changes from one phase to another phase. Context Nitrates Background Information Nitrogen is an element needed by all living plants and animals to build protein. In aquatic ecosystems, nitrogen is present in many forms. It can combine with oxygen to form a compound called nitrate. Nitrates may come from fertilizers, sewage, and industrial waste. They can cause eutrophication of lakes or ponds.

Elements & Periodic Table Now we're getting to the heart and soul of the way the Universe works. You know that a generic atom has some protons and neutrons in the nucleus and some electrons zipping around in orbitals. When those pieces start combining in specific numbers, you can build atoms with recognizable traits. If you have eight protons, neutrons and electrons, you will have an oxygen (O) atom. If you have seven protons, neutrons, and electrons, you will have a nitrogen (N) atom. The atoms for each element are unique, even though they are all made of similar subatomic parts. States of Matter States of Matter Barbara Pawela May School 512 S. Lavergne Chicago IL 60644 312-534-6140 Objectives: Grades 4-6 The students will be able to: A. Vital Signs – Climate Change: Vital Signs of the Planet An example of a temperature anomaly is how much warmer or colder than the long-term average a unit of time something is (like how much warmer than average the most recent year was globally). This graph illustrates the change in global surface temperature relative to 1951-1980 average temperatures. Nineteen of the 20 warmest years all have occurred since 2001, with the exception of 1998. The year 2016 ranks as the warmest on record (source: NASA/GISS). This research is broadly consistent with similar constructions prepared by the Climatic Research Unit and the National Oceanic and Atmospheric Administration.