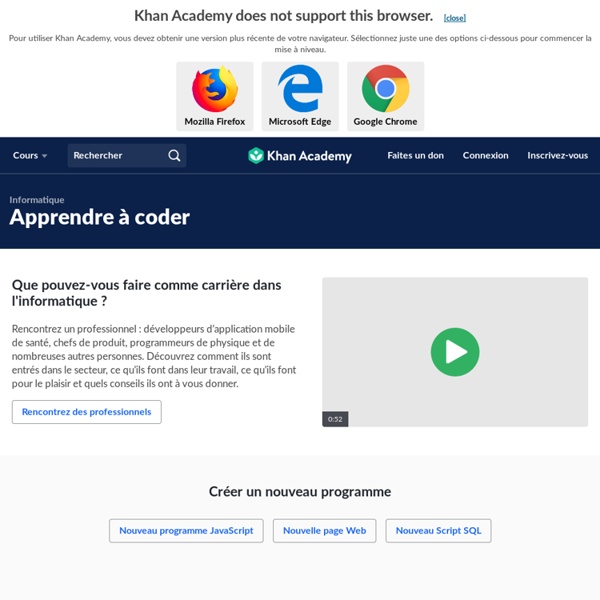 Application Microsoft "Project Siena" pour Windows dans Windows Store Microsoft Project Siena (code name) is a breakthrough technology that enables your business experts, analysts and imagineers to create transformative business apps. With Siena, they can now build custom apps with rich visuals, filled with custom intelligence and functionality, with no programming required. Place some visuals on a canvas, hook them up to your data, then customize how your app looks and works.

Kodu Kodu is a new visual programming language made specifically for creating games. It is designed to be accessible for children and enjoyable for anyone. The programming environment runs on the Xbox, allowing rapid design iteration using only a game controller for input. Programming as a Creative Medium The core of the Kodu project is the programming user interface. Creative Computing 7 units44 activitiesremixing encouraged download the Scratch 3.0 version of the guide> help learnerscreate new worldswith computing Download Swift Latest Development Snapshots Development Snapshots are prebuilt binaries that are automatically created from mainline development branches. These snapshots are not official releases. They have gone through automated unit testing, but they have not gone through the full testing that is performed for official releases. Swift is covered by the Swift License at swift.org/LICENSE.txt. Apple Platforms

GameMaker Last updated: 02/04/2019 We (meaning YoYo Games Limited, company number 05260718) use technologies on our website and mobile services (which we'll call the Services) to collect information that helps us improve your online experience. We refer to these technologies, which include cookies, collectively as “cookies.” This policy explains the different types of cookies used on the Services and how you can control them. We hope that this policy helps you understand and feel more confident about our use of cookies. If you have any further queries, please contact us at Please also see our Privacy Policy at www.yoyogames.com/legal/privacy. The Languages And Frameworks You Should Learn In 2016 Martin Angelov A lot happened in the software development world in 2015. There were new releases of popular programming languages, new versions of important frameworks and new tools.

Research FUSE Labs - Kodu Game Lab An overview of Kodu. (Click to play) Kodu lets kids create games on the PC and Xbox via a simple visual programming language. Kodu can be used to teach creativity, problem solving, storytelling, as well as programming. Anyone can use Kodu to make a game, young children as well as adults with no design or programming skills. Xamarin for Visual Studio - Build native mobile apps in C# for iOS, Android, Mac and Windows - Xamarin Directly edit storyboards Double-click a storyboard file to edit it in the IDE. Drag-and-drop controls to build screens, name controls to create fields, and double-click to add handlers without switching to Xcode. More accurate than Xcode

Picademy - Free Professional Development from Raspberry Pi Picademy is the Raspberry Pi Foundation’s FREE teacher training initiative. Our goal is to give educators the experience and tools they need to teach computing with confidence. Why Picademy? Getting started with the computing curriculum can be daunting. There’s a host of hardware and programming languages, and an array of technical terminology. Download Python OpenPGP Public Keys Source and binary executables are signed by the release manager or binary builder using their OpenPGP key. Release files for currently supported releases are signed by the following:

Programming in Scratch “Although many of the programs designed to teach kids to code are very simplistic, many of them, like Scratch, are suitable for all ages. It doesn't matter how old you are…Get started with the basics of programming!” -Lifehacker Want to learn computer programming, but unsure where to begin? This is the course for you! Scratch is the computer programming language that makes it easy and fun to create interactive stories, games and animations and share them online.