The Board Game that Teaches Programming to Kids 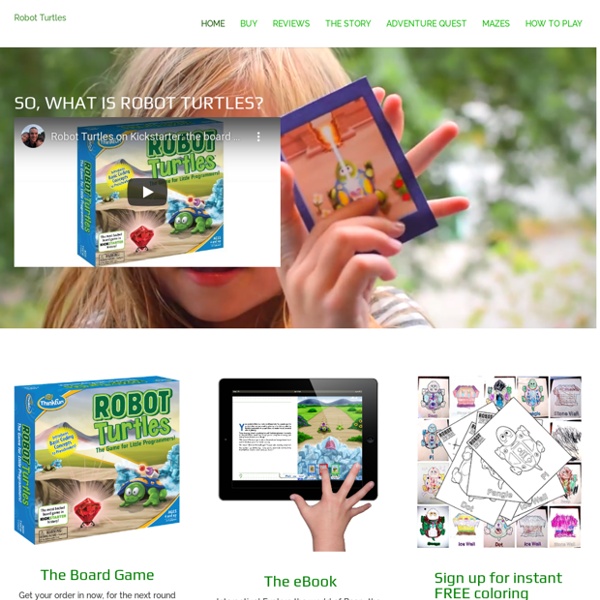 Creative Computing 7 units44 activitiesremixing encouraged download the Scratch 3.0 version of the guide> help learnerscreate new worldswith computing download the Scratch 3.0 version of the guide Tsuro of the Seas - Calliope Games In Tsuro of the Seas, you will sail the treacherous waters of the Mystic Seas in an engaging game of adventure and suspense! As the captain of a mighty ship, you will navigate the seas by placing wake tiles to direct your vessel. Take great caution to avoid your opponents’ ships… and the dangerous daikaiju (monsters) lurking under the surface. Les blocks de scratch à imprimer In September 2014 Computing will be a new curriculum subject and I wanted to make some resources that could be used to support Scratch After seeing these hands-on blocks I thought it would be great if anyone could make their own. So I set about creating some vector versions of the standard Scratch blocks that could be scaled to any size required. As I created them I also thought how useful it would be if Teachers could use them in other ways, for example, displays, PowerPoints and on Interactive Whiteboards. With this in mine the Scratch Block Package currently contains 66 blocks in the following formats: SVG – Scalable Vector Graphics.

2020-Conception et évaluation de kits robotiques pédagogiques - Thibault Desprez Abstract : The potential of robotic educational activities, and in particular the role of the physical instantiation of these activities, in which the manipulation of digital objects is central, remains tobe confirmed scientifically ; especially in terms of real classroom usability and their impact onthe effectiveness of learning and the motivational engagement of students. Moreover, it seemsthat these impacts also depend on the way in which these pedagogical tools are used (anddiverted) by the teacher in class, as well as by the school context itself. For these reasons, thismanuscript proposes in a first step in articulating a state of art from a variety of disciplinaryfields, notably scientific, such as computer science and robotics, IHM, psychology, cognitivesciences, or the sciences of education ; but also to introduce elements of ethics and societalissues.

GameMaker Last updated: 02/04/2019 We (meaning YoYo Games Limited, company number 05260718) use technologies on our website and mobile services (which we'll call the Services) to collect information that helps us improve your online experience. We refer to these technologies, which include cookies, collectively as “cookies.” The Empathy Toy – Twenty One Toys For Teams of 3–20 to use at work Empathy is being recognized as the #1 job skill, so it's no surprise that hundreds of HR Departments, Training and Development Teams, and Managers are bringing the Empathy Toy™ to work! The Empathy Toy™ proves that play and work are not opposites and that empathy helps teams collaborate better, and achieve better results. You'll find the Empathy Toy™ in small start-up companies and multi-national companies, played by teams in finance, tech, retail, and healthcare. Organizations are making time to play in Auckland, New Zealand and San Francisco, USA, in Seoul, South Korea and Amsterdam, Netherlands.

Activités débranchées EN Teaching London Computing in conjunction with cs4fn have produced a series of fun, mainly unplugged, activities for use in the classroom, suitable for all ages. More of our resources, including linked computing ‘story’ booklets can be found in our resources section. You may also want to look at cs4fn’s teacher resources or browse the latest cs4fn magazine. Other excellent sources of a similar style of activity are the New Zealand based but globally used CS Unplugged site and the Glasgow University CS Inside project.

Labyrinth - A family game from Ravensburger The clever and unique game play ensures an even playing field for players of all ages; so young children, teenagers, parents and grandparents all have an equal chance to win. As the walls are constantly moving, no two games are ever the same, which means it is always exciting. The game board measures 36 x 36cm, and some of the wall tiles are already glued in place, ready to start. Before you start the game, place all the wall tiles on the board, filling in the spaces between the fixed wall tiles. It does not matter which tiles go where, it is all random. The treasure cards need to be distributed equally amongst the players, but these must be kept secret.