eBooks: General Buddhism. This is a very popular book on questions and answers on basic Buddhism. 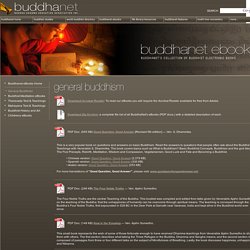 Read the answers to questions that people often ask about the Buddha's Teachings with Venerable S. Dhammika. The book covers topics such as What is Buddhism? Best Buddhist Books for Beginners: My Top 8 Picks. Photo: © Edward Dalmulder on flickr If you’re new to Buddhism and trying to find the best Buddhist book for a beginner, you might be overwhelmed by the amount of books available. 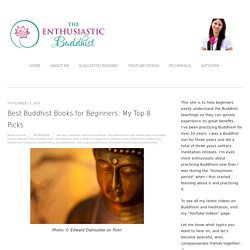 To make life easier for you, I’ve compiled a list of my top 8 picks that I recommend for beginners. Some of them are great at explaining the basics of Buddhist theory, while others are better at capturing the essence of the Buddha’s teachings. 12 Buddhist Books To Read On Your Path To Enlightenment. 10 Buddhist Books Everyone Should Read - Lion's Roar. 10 Buddhist books everyone should read, as selected by the editors of Lion’s Roar. 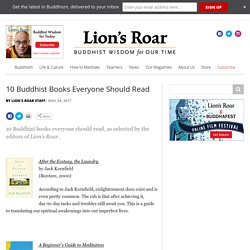 After the Ecstasy, the Laundry by Jack Kornfield(Bantam, 2000) According to Jack Kornfield, enlightenment does exist and is even pretty common. The rub is that after achieving it, day-to-day tasks and troubles still await you. This is a guide to translating our spiritual awakenings into our imperfect lives. A Beginner’s Guide to Meditationby Rod Meade Sperry and the editors of Lion’s Roar(Shambhala, 2014) Advice and inspiration from Buddhism’s most renowned teachers, including many Lion’s Roar readers’ favorites like Pema Chödrön, Thich Nhat Hanh, the Dalai Lama, Norman Fischer, Judy Lief, and many more.

Being Peaceby Thich Nhat Hanh(Parallax, 1987) Addresses both personal awakening and engaging compassionately in the world. Cutting Through Spiritual Materialismby Chögyam Trungpa(Shambhala, 1973) Happiness Is an Inside Jobby Sylvia Boorstein (Ballantine, 2007) Harvard neuroscientist: Meditation not only reduces stress, here’s how it changes your brain. Buddhist and meditation teacher Tara Brach leads a Vipassana meditation group at the River Road Unitarian Church in Bethesda. 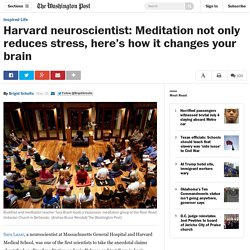 (Andrea Bruce Woodall/The Washington Post) Sara Lazar, a neuroscientist at Massachusetts General Hospital and Harvard Medical School, was one of the first scientists to take the anecdotal claims about the benefits of meditation and mindfulness and test them in brain scans. What she found surprised her — that meditating can literally change your brain.

She explains: Q: Why did you start looking at meditation and mindfulness and the brain? Lazar: A friend and I were training for the Boston marathon. The yoga teacher made all sorts of claims, that yoga would increase your compassion and open your heart. I thought, maybe it was just the placebo response. At that point, I was doing my PhD in molecular biology. Q: How did you do the research? Lazar: The first study looked at long term meditators vs a control group. Q: What did you find? 1. 2. 3. 5 Mistakes New Meditators Make + What To Do Instead. How Yoga Gave Me The Strength To Come Out There are times I still wonder if I would have ever come out of the closet had my friend not dragged me to that first yoga class, years ago. 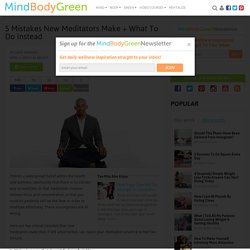 In retrospect, I had no idea that "gay" would follow Read There’s a widespread belief within the health and wellness community that there is no correct way to meditate, or that meditation involves intense focus and concentration, or that you must sit perfectly still on the floor in order to meditate effectively. These assumptions are all wrong. Here are five critical mistakes that new meditators make that, if left uncorrected, can cause your meditation practice to feel like torture. 1. Popular pictures of meditators almost always show people sitting on the ground with their backs straight, legs crossed and with their thumb and index fingers touching. But this austere position can and often does feel exhausting after a few minutes.

What you should do instead: 11 Signs Your Soul Has Reincarnated Many Times. By ALETHEIA LUNA | Expanded Consciousness When we understand reincarnation as the maturation process, or evolution, of soulful energy, it follows that some of us have intuitively experienced different things in our lives that reflect on the age of the energy known as our souls. 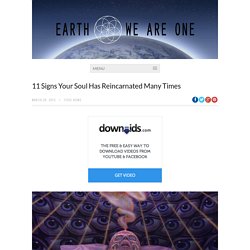 It is commonly believed that many of our personal characteristics, experiences and capabilities in this life reflect on whether we have lived before on earth. It is thought that the more we mature, the more gifted we are in certain areas of life and the more frequently we have ‘spiritual’ experiences. 4 Signs That This Isn’t Your First Life On Earth. By Steven Bancarz | Reincarnation is the spiritual belief that souls leave the body at the death of the physical body and the re-enter another physical body after spending a brief time in the spirit world. 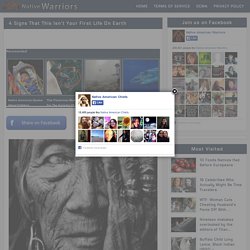