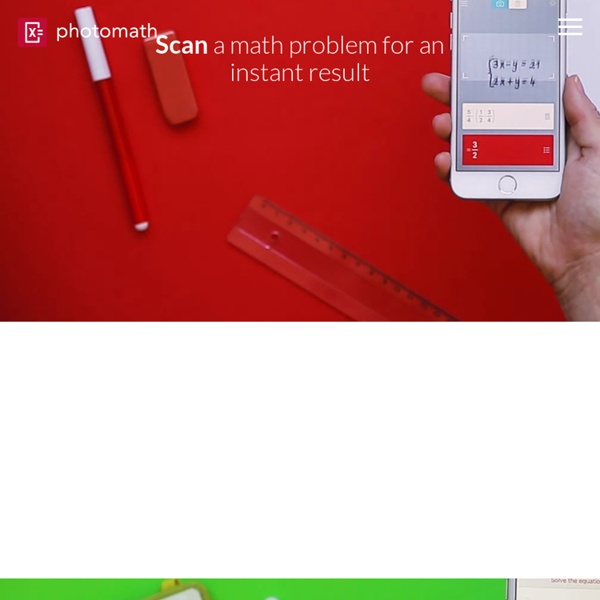 Creative Math Problem Solving Please enable JavaScript to view this page content properly. Joy of Mathematical Problem Solving This website is a resource for anyone who wants to enjoy creative math problem solving. Introduction to Metadata Metadata is organised information that describes, locates or otherwise makes it easier to retrieve information. Metadata is all around us, it started as catalogue cards in libraries and is now used mainly in a digital manner. Metadata is everywhere, every webpage, every file, picture, piece of software has metadata that describes what it is, when was it created, what size it is, generally everything you or a computer needs to know to efficiently find information. Szögfüggvények - Trigonometry, Unit circle, Szinusz Témák Trigonometry Unit circle Szinusz Koszinusz Tangents Leírás

10 Math Apps that Teach Number Concepts By Katie Chirhart When you type “math” into the Apple App Store, the majority of apps found focus on math facts. These are great for children to do at home or at school for additional practice. However, there are a wide variety of apps that focus on teaching the concepts behind mathematical processes—a critical piece of the learning equation. The beauty of these apps is often overlooked.

OpenBoard, the best interactive whiteboard for schools and universities Free and open source Get OpenBoard now OpenBoard is an open source cross-platform teaching software for interactive whiteboard designed primarily for use in schools and universities. It can be used both with interactive whiteboards or in a dual-screen setup with a pen-tablet display and a beamer. The Three Acts Of A Mathematical Story 2016 Aug 6. Here is video of this task structure implemented with elementary students. 2013 May 14. How I Acted Like A Pundit And Screwed Up On Donald Trump Since Donald Trump effectively wrapped up the Republican nomination this month, I’ve seen a lot of critical self-assessments from empirically minded journalists — FiveThirtyEight included, twice over — about what they got wrong on Trump. This instinct to be accountable for one’s predictions is good since the conceit of “data journalism,” at least as I see it, is to apply the scientific method to the news. That means observing the world, formulating hypotheses about it, and making those hypotheses falsifiable. (Falsifiability is one of the big reasons we make predictions.)

‎Einstein's Riddle Logic Puzzle on the App Store (Klasszikus játék logikus gonolkodás fejlesztése) Real Einstein Challenge is a logic puzzle to challenge your brain. It is known as different names, such as Einsteins Riddle, Zebra Puzzle or Sherlock Holmes Puzzle. The game presents a logic problem that gives you several clues describing a scenario involving a number of people. Each person has a certain job, owns a certain pet, likes some kind of sport, among other attributes. 5 Online Calculators to Improve Your Basic Math Skills The first “compact” calculator was released in 1957, and needed to be built into a desk. Over time the device shrank, to the point where you could easily fit it in your hand. These days most people use software calculators on their phones, instead of a separate device.

Einstein's Riddle Logic Puzzles Einstein Challenge is a logic puzzles game to challenge your brain. It is known as different names, such as Logic Problems, Logic Games, Dell Puzzle, Inspector Parker, Zebra Puzzle, Sherlock Holmes Puzzle or Tick and Cross Logic Grids.• Hundreds of Riddles: 3000 logic puzzles, all free! No packs to buy.• Increasing Difficulty: Several grid sizes, from 4x4 to 14x9 - the bigger the harder.• Filters for Experts: Filters to help you find hints related to the elements you want.• Mobile Riddle: Fully adapted to mobile interface: no clumsy triangular grid as the paper version.This logic puzzles game presents some logic problems that gives you several clues describing a scenario involving a number of people. Each person has a certain job, owns a different pet, likes some kind of sport, among other attributes. Your role in this logic game is to do a massive intelligence work: by using pure logic thinking and elimination, to uniquely deduce the whole riddle based on only a few initial clues.