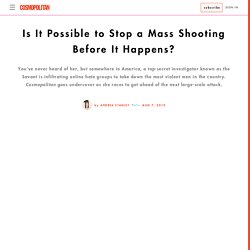 Michael Finton was living in Decatur, Illinois, a shrinking manufacturing town, working as a part-time cook at a cheap take-out joint. He was 29 and unmarried, with red hair and white skin, described as polite by his coworkers, as the mild-mannered guy next door by his neighbors. He liked to hang out and play cards and watch soccer. He also wanted to kill as many people as he could. But no one knew that yet—except for her. What Explains the Decline of Serial Killers? From the 1970s through the ’90s, stories of serial killers like Ted Bundy and the Green River Killer — both of whom pleaded guilty to killing dozens of women — dominated headlines. 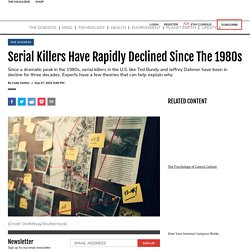 Today, however, we see far fewer twisted tales in the vein of the Zodiac Killer or John Wayne Gacy. After that three-decade surge, a rapid decline followed. Nearly 770 serial killers operated in the U.S. throughout the 1980s, and just under 670 in the ’90s, based on data compiled by Mike Aamodt of Radford University. I'll Be Gone in the Dark: the story of the search for the Golden State Killer. Like any seasoned documentarian, Liz Garbus started with a plan, and the certainty she’d end up changing it. 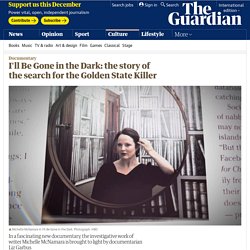 She had gone to Chicago to officially commence production on her adaptation of I’ll Be Gone in the Dark, the writer Michelle McNamara’s non-fiction account of her efforts to ascertain the identity of the serial killer known as the East Area Rapist (AKA the Golden State Killer, AKA the Original Night Stalker). It was going to be a relatively simple trip: get some footage of the late McNamara’s husband, the comedian Patton Oswalt, doing some readings and signings at a book event, establish friendly contact with Oswalt and some other key figures from her world, call it a night. Things went according to schedule, Garbus and her crew headed back to their hotel, and everyone turned in. The Zodiac Killer has been a mystery for 50 years – but one man thinks he's solved it. There are few unsolved mysteries that fascinate quite like that of the Zodiac killer. 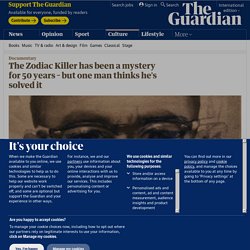 The unknown perpetrator terrorized the San Francisco Bay area in the late 1960s and early 1970s, killing at least seven people (in letters, he claimed to have killed 37), most of them in surprise attacks on so-called “lover’s lanes”. His taunting of the police and press with cryptic letters precipitated an era of media-disseminated public terror; the puzzle of his unsolved ciphers and terrifying peeks into an unhinged mind inspired the David Fincher 2008 film Zodiac, countless true crime TV specials, and passionately active amateur detective forums.

Zodiac: cipher from California serial killer solved after 51 years. It took 51 years and a team of experts from three countries to crack the code to a cipher left by the still unidentified Zodiac Killer, who haunted northern California communities in the 1960s and 70s. 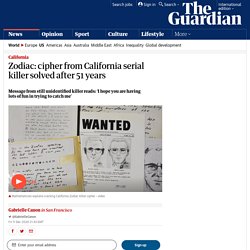 But, on Friday, the code-breaker David Oranchak revealed for the first time, the ominous message sent by the murderer. “I hope you are having lots of fun in trying to catch me,” the message, sent to the San Francisco Chronicle in November 1969 in a series of symbols, reads. Murder Accountability Project. Scientists Become Body Collectors To Solve Mysteries Of Decomposition. A double set of fences topped with barbed wire circles this outdoor decomposition site outside Grand Junction, Colo. 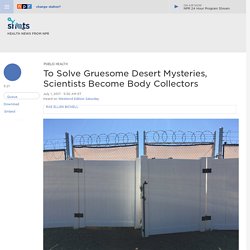 The barrier thwarts prying eyes and protects the curious from an unpleasant surprise. Rae Ellen Bichell/NPR hide caption toggle caption Rae Ellen Bichell/NPR A double set of fences topped with barbed wire circles this outdoor decomposition site outside Grand Junction, Colo. Before she confronts death straight on, Melissa Connor always puts on a pair of rubber boots. Then Connor opens the back door of her lab, located just outside Grand Junction, Colo., and steps onto a gravel path. Predictive Policing Software. Scientists solve forensic mystery. Investigators sometimes have to wait for up to ten days before they can find out when a person died, because the flies in the pupa stage cannot be used to determine the time of death. 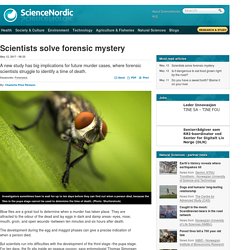 (Photo: Shutterstock) Blow flies are a great tool to determine when a murder has taken place. They are attracted to the odour of the dead and lay eggs in dark and damp areas--eyes, nose, mouth, groin, and open wounds--between ten minutes and six hours after death. Is Sketching a Killer’s Face From DNA Science or a Scam? Darlene Krashoc was slain 30 years ago, and now authorities say they know what her murderer looks like. 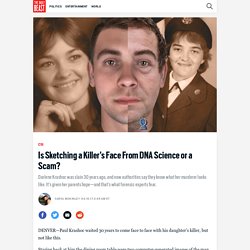 It’s given her parents hope—and that’s what forensic experts fear. DENVER—Paul Krashoc waited 30 years to come face to face with his daughter’s killer, but not like this. Staring back at him the dining room table were two computer-generated images of the man the U.S. Army suggests murdered Specialist Darlene Krashoc on March 17, 1987, outside Fort Carson, Colorado. Scientists say they may have new evidence in D.B. Cooper case. © FBI/Handout via Reuters Artist sketches released by the FBI of a man calling himself D.B. 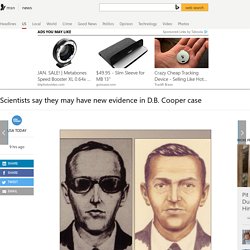 Cooper, who vanished in 1971 with $200,000 in stolen cash after hijacking a commercial airliner over Oregon, U.S. SEATTLE — A band of amateur scientists selected by the FBI to look for clues in the world’s most infamous skyjacking may have found new evidence in the 45-year-old case. Forensic research on modern child abuse can shed light on past cultures. A study was published last week on the DNA of Helicobacter pylori, the pathogen extracted from the stomach of Ötzi, the ice mummy who has provided valuable information on the life of Homo Sapiens. 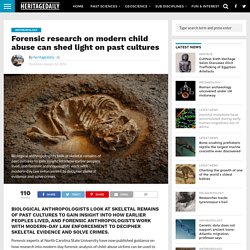 New research at the European Academy of Bolzano/Bozen (EURAC) further clarifies the genetic history of man who lived in the Eastern Alps over 5,300 years ago. In 2012 a complete analysis of the Y chromosome (transmitted from fathers to their sons) showed that Ötzi’s paternal genetic line is still present in modern-day populations. In contrast, studies of mitochondrial DNA (transmitted solely via the mother to her offspring) left many questions still open. Meet the Amateur Sleuth Who's About to Unmask the Zodiac Killer. Zodiac Killer Police Reports. Former CIA Director's Death Raises Questions, Divides Family. Explanations For UFOs. [disinfo ed.'s note: the following is an excerpt from UFO Investigations Manual: UFO investigations from 1982 to the present day by Nigel Watson, courtesy of Haynes Publishing] Jupiter Storm.

Sniper Attack On America's Power Grid. FBI: 'You Know You’re Desperate When You’re Asking The American People For Help' This What World Like Now. BOSTON—After Monday’s horrific terror attack at the Boston Marathon that killed three and left hundreds injured, officials confirmed Tuesday that the bombings and senseless violence that followed occurred primarily because this is the kind of world we live in now.

According to reports, this is an age when, in an instant, two explosions can go off in rapid succession in a major urban center, disrupt the lives of thousands, and terrify hundreds of millions. Outlook - puhnner. Ernst & Young: using forensic analytics to prevent fraud. Data is generally thought the be the lifeblood of 21st Century business, but the so-called “information age” is also fraught with risk. Cybercrime continues to grow rapidly, and evidence of fraud, abuse and criminal activity often resides on a multitude of electronic systems. Most companies are still using rules-based queries and analytics tools to identify fraud, which rely on the individual to ask questions of the data, based on what is currently known.

This approach requires both time and luck to uncover inconsistencies. Ernst & Young’s forensic analytics team aims to provide its clients with new ways to identify, predict and reduce fraud and improve business efficiencies. Murder on the menu. On the third Thursday of every month, top detectives and forensics investigators from around the country gather for lunch at the French-Renaissance-style brick mansion that houses the Union League—one of Philadelphia’s oldest and most elite social clubs. The menu one recent Thursday featured grilled chicken, scallion risotto—and a grisly five-year-old murder that happened 3,000 miles away. Jodine Serrin, 39, was found stabbed and beaten to death in the bedroom of her Carlsbad, CA home on Valentine’s Day, 2007. But the trail to any suspects had long since grown cold, and the Carlsbad cops working the case—Detective Bryan Hargett and Sergeant Mickey Williams—had reached only dead ends.