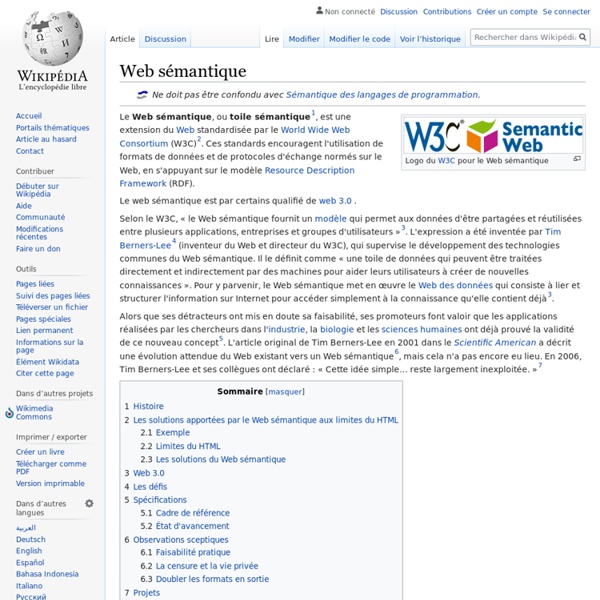 C Data Activity More and more Web applications provide a means of accessing data. From simple visualizations to sophisticated interactive tools, there is a growing reliance on the availability of data which can be “big” or “small”, of diverse origin, and in different formats; it is usually published without prior coordination with other publishers — let alone with precise modeling or common vocabularies. The Data Activity recognizes and works to overcome this diversity to facilitate potentially Web-scale data integration and processing. It does this by providing standard data exchange formats, models, tools, and guidance. The overall vision of the Data Activity is that people and organizations should be able to share data as far as possible using their existing tools and working practices but in a way that enables others to derive and add value, and to utilize it in ways that suit them.

RDF - Semantic Web Standards Overview RDF is a standard model for data interchange on the Web. RDF has features that facilitate data merging even if the underlying schemas differ, and it specifically supports the evolution of schemas over time without requiring all the data consumers to be changed. RDF extends the linking structure of the Web to use URIs to name the relationship between things as well as the two ends of the link (this is usually referred to as a “triple”). Using this simple model, it allows structured and semi-structured data to be mixed, exposed, and shared across different applications. This linking structure forms a directed, labeled graph, where the edges represent the named link between two resources, represented by the graph nodes.

Can open source software free your mind? Wikipedia defines a mind map as "a picture that represents semantic connections between portions of learned material." Instead of a linear approach, where you write a bunch of stuff in no particular order on a piece of scrap paper, a mind map organizes ideas from a central theme into a tree-like branch structure, sort of like a table of contents but much more fluid and dynamic in that the map "folds" and can also be linked in non-linear ways. The general premise of mindmapping software is that it will help you to organize, link, and integrate thoughts. Mind mapping software can be used for brainstorming and conceptualization, where you've got ideas you need to put down, structure, expand and connect. FreeMind is a Java application; you need to be running Java 1.4. It's available for Windows, Mac OS X, and *nix platforms with simple installers (a .exe for Windows, and on *nix, freemind.sh).

W3C Data Activity - Building the Web of Data Data is increasingly important to society and W3C has a mature suite of Web standards with plans for further work on making it easier for average developers to work with graph data and knowledge graphs. Linked Data is about the use of URIs as names for things, the ability to dereference these URIs to get further information and to include links to other data. There are ever increasing sources of Linked Open Data on the Web, as well as data services that are restricted to the suppliers and consumers of those services. The digital transformation of industry is seeking to exploit advanced digital technologies.

Core People The Tor Project is a 501(c)(3) non-profit based in the United States. The official address of the organization is: The organization consists of many volunteers and a few employees. OWL The OWL Web Ontology Language is designed for use by applications that need to process the content of information instead of just presenting information to humans. OWL facilitates greater machine interpretability of Web content than that supported by XML, RDF, and RDF Schema (RDF-S) by providing additional expressive power along with a formal semantics. The group's work is complete with the publication of OWL 2 (Second Edition). There may be new Errata and discussion on public-owl-dev@w3.org. Second Edition Deliverables See Documentation Roadmap for more details

Guides A long time ago, in a galaxy far, far away, JavaScript was a hated language. In fact, “hated” is an understatement; JavaScript was a despised language. As a result, developers generally treated it as such, only tipping their toes into the JavaScript waters when they needed to sprinkle a bit of flair into their applications. Despite the fact that there is a whole lot of good in the JavaScript language, due to widespread ignorance, few took the time to properly learn it.

Application programming interface Set of subroutine definitions, protocols, and tools for building software and applications More recently, the term has been often used to refer to a specific kind of interface between a client and a server, which has been described as a “contract” between both - such that if the client makes a request in a specific format, it will always get a response in a specific format or initiate a defined action.[1] This is a specialized form of API, sometimes defined as a WEB API. Purpose[edit] Usage[edit] Libraries and frameworks[edit]

W3C Semantic Web Activity Homepage The Semantic Web is a web of data. There is lots of data we all use every day, and it is not part of the web. I can see my bank statements on the web, and my photographs, and I can see my appointments in a calendar. But can I see my photos in a calendar to see what I was doing when I took them? Can I see bank statement lines in a calendar? Why not? Pourquoi l'« open source » passe à coté du problème que soulève le logiciel libre by Richard Stallman When we call software “free,” we mean that it respects the users' essential freedoms: the freedom to run it, to study and change it, and to redistribute copies with or without changes. This is a matter of freedom, not price, so think of “free speech,” not “free beer.”

SKOS Simple Knowledge Organization System - home page SKOS is an area of work developing specifications and standards to support the use of knowledge organization systems (KOS) such as thesauri, classification schemes, subject heading lists and taxonomies within the framework of the Semantic Web ... [read more] Alignment between SKOS and new ISO 25964 thesaurus standard (2012-12-13) ISO 25964-1, published in 2011, replaced the previous thesaurus standards ISO 2788 and ISO 5964 (both now withdrawn). Members of the Working Group responsible for ISO 25964 have gone on to consider the implications for SKOS users. They have developed a set of linkages between the elements of the ISO 25964 data model and the ones from SKOS, SKOS-XL, and MADS/RDF.