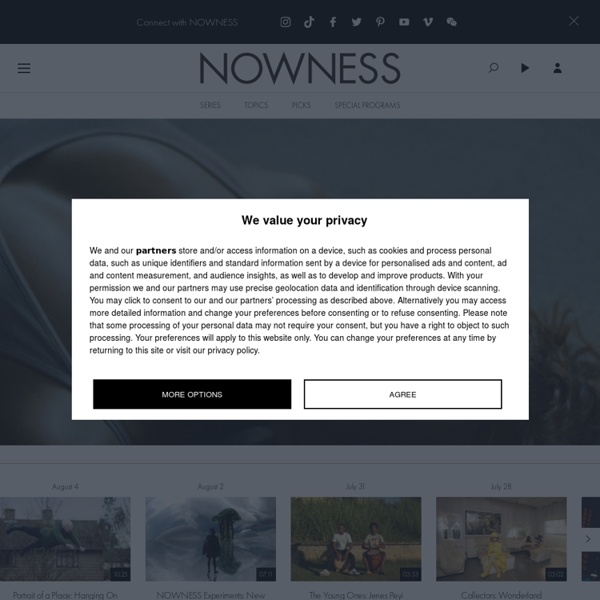 The power of networks: Beyond Critical Regionalism In 1961 the French philosopher Paul Ricoeur observed: ‘Everywhere throughout the world, one finds the same bad movie, the same slot machines, the same plastic or aluminum atrocities, the same twisting of language by propaganda.’1 Witness the problem of universalisation: a toxic byproduct of the globalisation process. Of course, we are familiar with solo cups and Oreos, but what does this mean for architecture and urbanism? Will all of our cities soon look the same? silver&silver streetsick: Larry Sultan Mike Mandel 1977 oldtimefriend: Chelsea Art Ball, London, 1958-1959, Sergio Larrain (Source: secretcinema1) Takeshi Murata Made An Animated Sculpture That Melts Into Itself This past weekend, digital-art impresario Takeshi Murata premiered new work at gallery Ratio 3's space at the Frieze art fair. The artist is known for distorting and manipulating videos into chaotic-yet-stunning pieces of colorful geometry, and while his new work, Melter 3-D, is short on color, it is undoubtedly a work of incredible form—especially as it never maintains a consistent one, despite being physical. Melter 3-D is by definition a zoetrope, a device that produce the illusion of motion from a rapid succession of static pictures, but it's tangible.

Artist 'Erases' Vintage Pornography In Stunning (N)SFW Series Back in the days of analog pornography, naughty cartoons and graphic photography were produced in tangible form. Copied and mass produced in magazines and other collections, the images were to be seen and disregarded, ogled and tossed aside for another pair of hungry eyes. Little attention was paid to the potential aesthetic beauty of the imagery, save for, perhaps, the wandering mind of the late artist Stephen Irwin.

See The Amazing, Absurd Phenomenon Of The Wet Dog Shake, Captured In Stunning Photos Photographer Carli Davidson spends a lot of time cleaning her walls and furniture. That’s because she’s got a jowly French Mastiff named Norbert, who is always shaking his big head and flinging drool everywhere. “It was during one of those moments when I was cleaning that I was like, ‘Oh man, I wonder what this actually looks like--what it looks like when he is shaking his head,’” Davidson tells Co.Create. Norbert, whom Davidson describes as sensitive, was notoriously camera shy at the time, so she brought a friend’s French Mastiff into her Portland studio, got him wet, and started shooting.

Processing Plant /// Inferno Inferno (working title) is a robotic performance project inspired by the representation of the different levels of hell as described in Dante's Inferno or the Singaporean Haw Par Villa's Ten Courts of Hell1 (which is based on a Chinese Buddhist representation). In Inferno, the "circles of hell" concept is mainly an artistic framework, a general working theme under which the different parts of the performance will be regrouped. It is observed that under these two cultural representations, each "level of hell" corresponds to a particular form of punishment for a particular sin.

Film & Video The following films are presented for educational and non-commercial use only. All copyrights belong to the artists. About UbuWeb Film & Video UbuWeb is pleased to present hundreds of avant-garde films & videos for your viewing pleasure. Scientists reconstruct speech through soundproof glass by watching a bag of potato chips Your bag of potato chips can hear what you're saying. Now, researchers from MIT are trying to figure out a way to make that bag of chips tell them everything that you said — and apparently they have a method that works. By pointing a video camera at the bag while audio is playing or someone is speaking, researchers can detect tiny vibrations in it that are caused by the sound.

19-Year-Old Will Lose Virginity In Front Of A Gallery, Because Art (NSFW) The art student planning on losing his virginity in a live performance later this year has officially announced a date. The controversial act will take place April 2, 2014 at an undisclosed venue organized by The Orange Dot gallery. Clayton David Pettet, a 19-year-old from Central Saint Martins College of Arts and Design, garnered attention last year when he outlined his plan to have sex with an anonymous male partner in front of art gallery crowds. The project, dubbed "Art School Stole My Virginity," was inspired by his experience as a 16-year-old student questioning the cultural significance of virginity. "When all my peers at school were losing their Virginity it was incredibly hard for me to ask why I was still a Virgin and why it meant so much to the people all around me," Pettet writes on his tumblr. "My piece isn't a statement as much as it is a question.

Icebergs Icebergs is joining Pinterest Dear Penguins, Today we want to share some big news with you. Icebergs has been acquired by Pinterest. Sadly, this means that Icebergs will be discontinued on September 1rst, 2014 — Together with its mobile app and services. As of today, we offer all our users a few options to export their content until the day of closing. Auger Loizeau: Smell+ This project explores the human experiential potential of the sense of smell, applying contemporary scientific research in a range of domestic and social contexts. The current low status of smell is a result of the revaluation of the senses by philosophers and scientists of the 18th and 19th centuries. Smell was considered lower order, primitive, savage and bestial. Smell is the one sense where control is lost, each intake of breath sends loaded air molecules over the receptors in the nose and in turn potentially gutteral, uncensored information to the brain. At the same time our bodies are emitting, loading the air around us and effecting others in ways we are only now starting to understand.

Colorful Psychedelic Installations of Sugar and Candy by Pip & Pop “I saw a dream like this” at Australian Experimental Art Foundation, Adelaide 2013. Photos by Andre Castellucci and Pip & Pop “Through a hole in the mountain” at MT Kurashiki, Japan 2014. Photos by Keizo Kioku