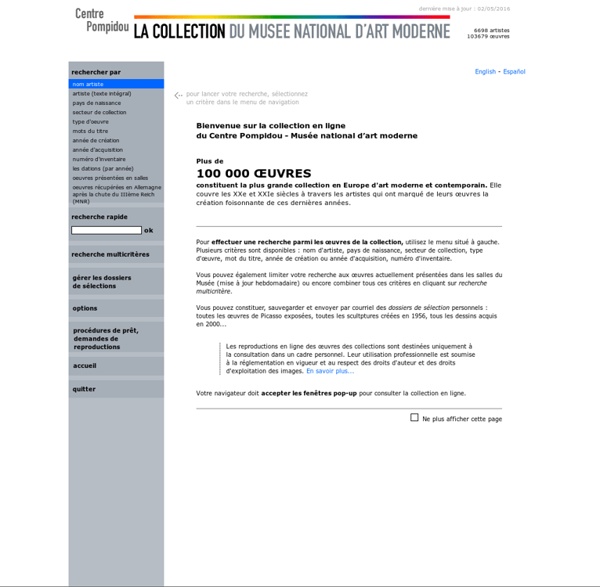 Vietnam war photojournalist dies A Welsh photojournalist renowned for his coverage of the Vietnam war has died at the age of 72. Philip Jones Griffiths, who was born in Rhuddlan, Denbighshire, died on Tuesday at his London home after a cancer battle, his agency Magnum said. His work in Vietnam was collated into a book, published in 1971, which became crucial in challenging attitudes to the war in the United States. He also photographed conflicts in Northern Ireland, Iraq and Bosnia. Mr Jones Griffiths left Wales at the age of 16 but has said that his upbringing as a Welshman was the basis for everything he did. 10 Unique Creations Made From Computer Hard Drives [PICS] On this day in 1956, IBM introduced the IBM 305 RAMAC — the first computer with a hard drive. It boasted capacity for less than 5MB of data stored on 50 24-inch disks. Fast forward to today.

Collection Online : Guggenheim New York Featuring nearly 1600 artworks by more than 575 artists, the Collection Online presents a searchable database of selected artworks from the Guggenheim’s permanent collection of over 7,000 artworks. The selected works reflect the breadth, diversity, and tenor of the Solomon R. Guggenheim Foundation’s extensive holdings from the late 19th century through the present day, and are continually expanded to include a larger representation of the museum’s core holdings as well as recent acquisitions. In addition to highlights from the Solomon R.

Biography British (Welsh), b. 1936, d. 2008 Born in Rhuddlan, Wales, Philip Jones Griffiths studied pharmacy in Liverpool and worked in London while photographing part-time for the Manchester Guardian. In 1961 he became a full-time freelancer for the London-based Observer. He covered the Algerian War in 1962, then moved to Central Africa. From there he moved to Asia, photographing in Vietnam from 1966 to 1971. How to Recycle Tic Tac Box Video Hi stampers! In a small effort to go green, reduce, recycle, reuse. I am going to take this old TickTack box. That is not that old actually, I bought it and then one day they were gone because they are addicting. But I cleaned it all out.

Collection search - British Museum Registration numbers The most common type of Museum number begins with the year of acquisition. The database standardises these numbers in the form, for example: 1887,0708.2427 (year: comma: block of four numbers - usually representing a month and day: full-stop and final number). A Look Back at the Vietnam War on the 35th Anniversary of the Fall of Saigon – - PlogPlog Photo Blog Posted Apr 30, 2010 Share This Gallery Editor’s Warning: The following photo collection contains some graphic violence and depictions of dead bodies.

Gallery Michael Jackson Hardy Leung, July 31, 2010 Paul the Octopus Hardy Leung, July 11, 2010 Frida Kahlo Hardy Leung, July 7, 2010 Dalmatian Hardy Leung, June 8, 2010 Ada Lovelace (Computer Pioneer) Hardy Leung, May 26, 2010 Rosa Parks Hardy Leung, May 26, 2010 Eleanor Roosevelt Hardy Leung, May 26, 2010 Martin Luther King Jr. Country Populations Hardy Leung, April 1, 2010 Vietnam Inc. First published in 1971, "Vietnam Inc." was crucial in challenging public attitudes in the United States, turning the tide of opinion and ultimately helping to put an end to the Vietnam War. Philip Jones Griffiths' classic account of the war was the outcome of three years reporting, and as such it is one of the most detailed surveys of any conflict. Showing us the true horrors of the war as well as a study of Vietnamese rural life, Griffiths created a compelling argument against the de-humanizing power of the modern war machine and against American imperialism. Rare and highly sought-after, the book has become one of the enduring classics of photojournalism and is now available in this new edition - a careful recreation of the original with Philip Jones Griffiths' personal layouts and commentaries. The reissue also includes an introduction by the American linguist and political critic Noam Chomsky.