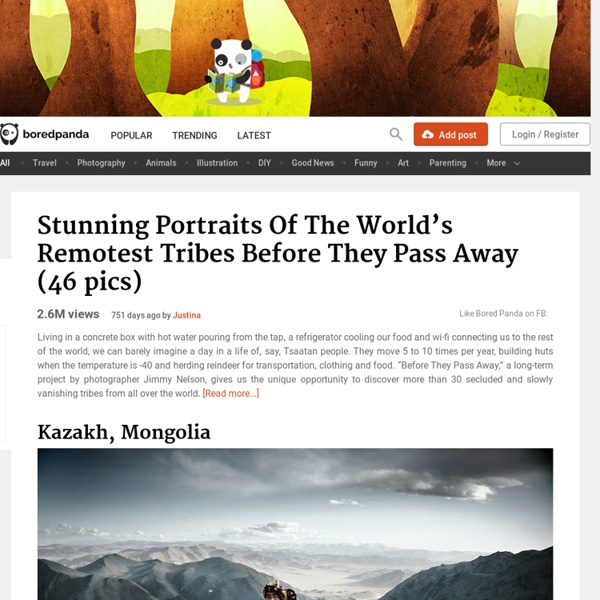 Living in a concrete box with hot water pouring from the tap, a refrigerator cooling our food and wi-fi connecting us to the rest of the world, we can barely imagine a day in a life of, say, Tsaatan people. They move 5 to 10 times per year, building huts when the temperature is -40 and herding reindeer for transportation, clothing and food. “Before They Pass Away,” a long-term project by photographer Jimmy Nelson, gives us the unique opportunity to discover more than 30 secluded and slowly vanishing tribes from all over the world. [Read more...] Spending 2 weeks in each tribe, Jimmy became acquainted with their time-honoured traditions, joined their rituals and captured it all in a very appealing way. His detailed photographs showcase unique jewellery, hairstyles and clothing, not to forget the surroundings and cultural elements most important to each tribe, like horses for Gauchos. Source: beforethey.com Book: Amazon.com Kazakh, Mongolia Himba, Namibia Huli, Indonesia and Papua New Guinea

Traditional Pinup Photos with Splashes of Milk as Clothes Captured with High-Speed Photography Inspired by the classic pin-ups of the 1940’s and 1950’s, photographer Jaroslav Wieczorkiewicz came up with a current version of those iconic posters. The twist introduced by the London based lensman was to use a highly unusual substance to cloth his models. Wieczorkiewicz used milk, (yes the kind you get from cows) along with high speed photography to capture the drink while being poured over his scantily clad (or near naked) models. He snapped hundreds of photos of every pose while pouring actual milk over the ladies, producing some unbelievable shots. All of the images of milk splashing on these women are real, with each of the milk ‘dresses” worn by the pretty models produced thru a layering process using dozens of different photographs. The photos were created in the absence of any illustrations, CGI, and Photoshop.

ProAm Imaging professional photography prints Client login ProAm imaging are delighted to roll out the new client area where users are able to place and pay for orders online just as before but now with added control and functions. You will be able to review your orders and receive email confirmation of your orders progress. If you already have an up-to-date Proam FTP user account, you can register now using those details: If you do not have current ProAm user details, then that's not a problem, just complete the registration form and we will send you the login information as soon as your FTP account has been created. Once registered as a ProAm user please login at the top of the page to gain access to our new client areas.

Goldilocks, meet Godzilla Scientists have a good idea of where to find habitable planets. A certain number of provisos have to be met: it must have an atmosphere and be in the “Goldilocks zone”, the right distance from its parent star to have water in liquid form. Whether this is possible depends, to a large degree, on the star and its age, and the size of the planet itself. This is why the discovery of a “Godzilla” Earth has come as a surprise for planet hunters. Enter Kepler-10c, a planet about 560 light years from Earth in the constellation Draco, where it circles its sun-like star every 45 days. Ancient pyramids discovered in Antarctica Three ancient pyramids have been discovered in the Antarctic by a team of American and European scientists. Two of the pyramids were discovered about 16 kilometers inland, while the third one was very close to the coastline, media reported. YouTube Screenshot An expedition to the bizarre structures should answer the intriguing question whether they are artificial or natural. The first reports about the pyramids appeared in western mass media last year. Few pictures were posted on some web-sites with a commentary that the strange structures could serve evidence that the ice-covered continent used to be warm enough to have had an ancient civilization living there.

Feelings and Emotions Vocabulary Word List Advertisement. EnchantedLearning.com is a user-supported site. As a bonus, site members have access to a banner-ad-free version of the site, with print-friendly pages.Click here to learn more. (Already a member? Click here.) Place A Cylindrical Mirror On These Drawings And They Instantly Come To Life István Orosz is a Hungarian artist who is known for his use of the technique anamorphosis. Orosz will create a drawing, that at first glance could seem abstract. It is not until he places a cylindrical mirror on the artwork that the illustration comes to life.

‘Lifting the Skirt’ with Amanda Sage’s Art ‘Empowering’ was the first word that popped in my head when I went into/entered the visionary world of artist Amanda Sage. Based in Los Angeles, Amanda aims to create portals that open to the infinite possibilities of being and expressing, to help remember and re-discover who we really are, where we originate from and where we are headed. One of the main reason I love visionary art is because of the experience of losing yourself into multiple dimensions blended to perfection to narrate a cosmic story on a single canvas. Through her art, Amanda seeks to challenge the viewer to question and evolve out of ignorance and dissolve the conditioning by the society. Fractal Enlightenment got in touch with Amanda to know more about her art, inspiration, her experience with the pioneer of visionary art – Ernst Fuchs – and what lies ahead. Visionary artist Amanda Sage

Scientist finds potential cure for AIDS David Harrich, from the Queensland Institute of Medical Research, said he had successfully modified a protein in HIV that the virus needed to replicate and instead made it "potently" inhibit virus growth. "I have never seen anything like it. The modified protein works every time," said Harrich. Lost Tribe On Small Island In The Indian Ocean remain virtually untouched by modern civilization. (Before It's News) Anything and everything anytime The Sentinelese (also Sentineli, Senteneli, Sentenelese, North Sentinel Islanders) are one of the Andamanese indigenous peoples and one of the most uncontacted peoples of the Andaman Islands, located in India in the Bay of Bengal. They inhabit North Sentinel Island which lies westward off the southern tip of the Great Andaman archipelago. They are noted for vigorously resisting attempts at contact by outsiders. The Sentinelese maintain an essentially hunter-gatherer society subsisting through hunting, fishing, and collecting wild plants; there is no evidence of either agricultural practices or methods of producing fire.

Laura Pannack Photography I think we often have quite a pessimistic notion of young relationships and forget that sometimes the simplicity of young love can form very strong relationships. Our ‘first love’ is a relationship we never forget and can act as template for future behavior and expectations in the future. A relationship free of worry, responsibility, experience and future plans can ultimately lead to one of fun and intimacy Perhaps young people rely on relationships to ease the burden of the frightening time of handling adolescence and all its uncertainties; finding support in someone who will not judge but share the experience. Who will despite any fears or insecurities we may have, accept and love us.

Host of 'other Earths' found The announcement brings Kepler's head count to 2740 candidate new worlds, 105 of which have been confirmed. "Two years ago, we had around 1200 candidate planets," Kepler astronomer Christopher Burke told a news conference webcast from an American Astronomical Society conference in Long Beach, California. "A year later, we added a significant number of new objects and saw the trend of huge numbers of very small planets - twice the size of Earth and smaller." With the addition of 461 new candidate planets over 22 months of Kepler telescope observations, the proliferation of smaller planets continues.

32 Beautiful Moments When Humans Chose Compassion Over Violence Despite our differences, we're all human beings. These powerful images have restored all my faith in the world. reddit.com