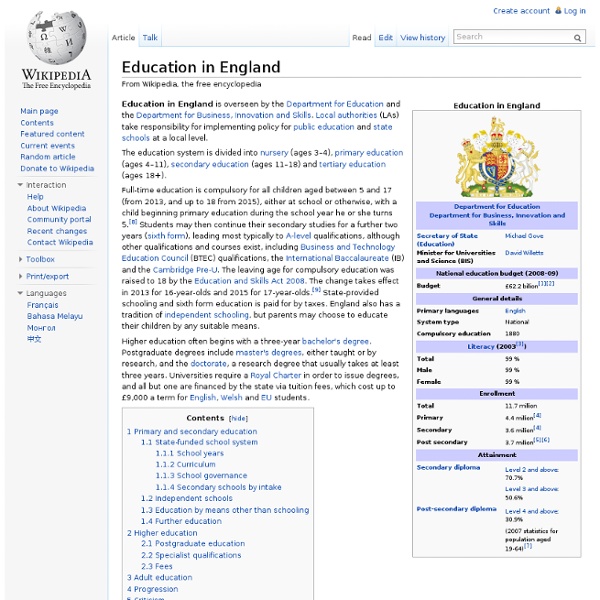 The education system is divided into early years (ages 3–4), primary education (ages 4–11), secondary education (ages 11–18) and tertiary education (ages 18+). Higher education often begins with a three-year bachelor's degree. Postgraduate degrees include master's degrees, either taught or by research, and the doctorate, a research degree that usually takes at least three years. History of English education[edit] Until 1870 all schools were charitable or private institutions, but in that year the Elementary Education Act 1870 permitted local governments to complement the existing elementary schools, to fill up any gaps. Education to the age of 18[edit] State-funded schools[edit] St Barnabas Church of England Primary School, Oxford Since 1998, there have been six main types of maintained school in England:[16][17][18] In addition, 3 of the 15 City Technology Colleges established in the 1980s still remain, the rest having converted to academies. Independent schools[edit] Higher education[edit]

Free University of Berlin The Freie Universität Berlin (lit. "Free University of Berlin", often abbreviated as FU Berlin) is a renowned research university located in Berlin and one of the most prominent universities in Germany. It is internationally known for its research in the humanities and social sciences, as well as in the field of natural and life sciences. Founded in West Berlin during the early Cold War period and born out of the increasingly Communist-controlled Humboldt University, its name refers to West Berlin's status as part of the free world, as opposed to the Soviet-occupied "unfree" areas surrounding the city. Freie Universität Berlin was one of nine German universities to win in the German Universities Excellence Initiative, a national competition for universities organized by the German federal government. History[edit] Freie Universität Berlin was established by students and scholars on December 4, 1948. Kaiser Wilhlem Institute for Chemistry, today: Hahn-Meitner building Recent years[edit]

Academy An academy (Attic Greek: Ἀκαδήμεια; Koine Greek Ἀκαδημία) is an institution of higher learning, research, or honorary membership. The name traces back to Plato's school of philosophy, founded approximately 385 BC at Akademia, a sanctuary of Athena, the goddess of wisdom and skill, north of Athens, Greece. In the western world academia is the commonly used term for the collective institutions of higher learning. The original Academy[edit] Before Akademia was a school, and even before Cimon enclosed its precincts with a wall,[1] it contained a sacred grove of olive trees dedicated to Athena, the goddess of wisdom, outside the city walls of ancient Athens.[2] The archaic name for the site was Hekademia, which by classical times evolved into Akademia and was explained, at least as early as the beginning of the 6th century BC, by linking it to an Athenian hero, a legendary "Akademos". The Neoplatonic Academy of Late Antiquity[edit] Renaissance academies in Italy[edit] 15th century accademie[edit]

Britain’s School System Explained The following is a guest post by Liz Jarvis from Living with Kids . I don’t envy anyone having to navigate the British school system. It’s an absolute minefield. Right from the start you’re plagued with that awful suspicion that if you make One False Move you’ll be messing up your child’s future. It’s fiercely competitive, and in some cases takes skill, cunning, joining a church and even moving house to get your child into a Good School. It’s the endless topic of conversation at school gates and dinner parties across the UK. Here’s (roughly) how it shapes up – please note that this isn’t exhaustive by any means, the British school system is incredibly complicated: Primary schools: The State (FREE) primaries usually go from ages 5 to 11. Prep schools/private primaries: You have to pay fees – sometimes exorbitant – to send your child to these schools, which tend to be smaller than the state primaries. Secondary schools: (This is where the competition gets really fierce.) Grammar schools:

The UK Education System explained | Bridgwater College FarmLink at Bridgwater College’s Rodway Farm To bring the classroom to the countryside and the countryside to the classroom. Future Farming Group The Future Farming Group works together on a number of joint initiatives for the benefit of the agricultural sector across the South West. Traineeships at Bridgwater College Traineeships is a new programme for young people who want to work, but who need extra help to gain an apprenticeship or job. Access to Higher Education Courses Access to HE courses are a fast-track route to gain a place at a university or college to study a higher education course. Residential School: English plus Golf Bridgwater College and Lee Westwood Golf School are offering a residential school for individuals to learn English and enhance their Golf skills. 24+ Advanced Learning Loans The Government is introducing Advanced Learning Loans for anyone aged 24+ starting a course at level 3 and above. Bridgwater College's University Partners Higher Education Explained

Charter schools in the United States Charter schools in the United States offer primary or secondary education without charge to pupils who take state-mandated exams.[1] These charter schools are subject to fewer rules, regulations, and statutes than traditional state schools, but receive less public funding than public schools, typically a fixed amount per pupil. They are non-profit entities, and can receive donations from private sources.[2] The number of American charter schools has grown from 500 in 16 states and the District of Columbia[when?] They may be founded by teachers, parents, or activists[8] although state-authorized charters (schools not chartered by local school districts) are often established by non-profit groups, universities, or government entities.[9] School districts may permit corporations to manage multiple charter schools. They sometimes face opposition from local boards, state education agencies, and unions. History[edit] Minnesota was the first state to pass a charter school law in 1991. The U.S.

Academy (English school) Academies are self-governing and most are constituted as registered charities or operated by other educational charities, and may receive additional support from personal or corporate sponsors, either financially or in kind. They must meet the same National Curriculum core subject requirements as other state schools and are subject to inspection by Ofsted. The Labour Government under Tony Blair established academies in 2000. The chief architect of the policy was Andrew Adonis (now Lord Adonis, formerly Secretary of State at the Department for Transport) in his capacity as education advisor to the Prime Minister in the late 1990s.[2] The introduction of academy schools was opposed, notably by teachers' trade unions and some high-profile members within the Labour Party, such as former party leader Lord Kinnock.[3][4] There are no academies in Wales, as education policy there is devolved to the Welsh Assembly. I am more authentically Andrew Adonis than Andrew Adonis is

King's College London King's College London (informally King's or KCL) is a public research university located in London, United Kingdom, and a constituent college of the federal University of London. King's is arguably the third-oldest university in England, having been founded by King George IV and the Duke of Wellington in 1829, receiving its royal charter in the same year.[4][5] St Thomas' Hospital, which is now a teaching hospital of King's College London School of Medicine, has roots dating back to 1173. In 1836, King's became one of the two founding colleges of the University of London.[6][7][8] History[edit] Foundation[edit] A royal charter to incorporate King's College was granted by George IV on 14 August 1829, stating the intention of the new College:[18] ...for the general education of youth in which the various branches of Literature and Science are intended to be taught, and also the doctrines and duties of Christianity... inculcated by the United Church of England and Ireland. 19th century[edit]