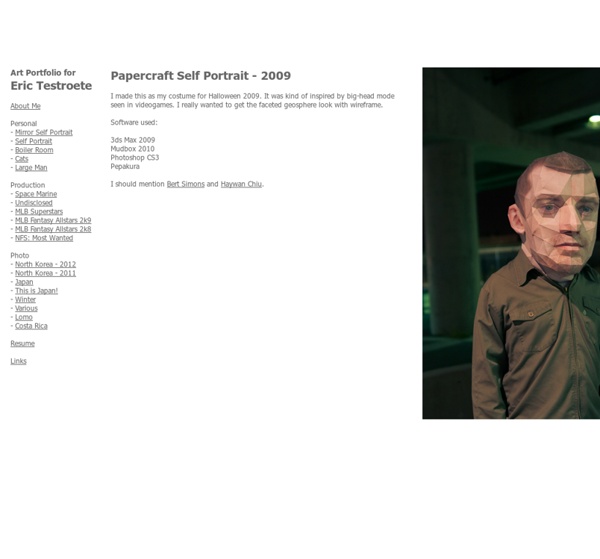 Any phonetic script can be learned in just a few hours If you liked my association technique mentioned below, you would also enjoy my tips on using imagination to memorize vocabulary, which are discussed in great detail with many other hacks in the Language Hacking Guide. See the most popular posts on the right below for other interesting topics. For those curious, this post discusses Thai, but the ideas can equally be applied to other phonetic scripts such as Japanese (but not as well for Chinese). Just one week into the challenge of reading/speaking Thai in 8 weeks (actually only about 5 hours total, since I’ve been quite busy since I arrived, but I’ve made time to learn on the skytrain/in restaurants/taxis etc.) and I’ve reached the first major milestone already. I can read Thai. The major thing still missing is tones, which admittedly are an extremely important part of this language that cannot be ignored and I will get to shortly (Edit: Done!

Holography without Lasers: Hand-drawn Holograms [SCIENCE HOBBYIST] Several hologram plates.(Obviously you cannot see the 3D effect in this flat photograph.) Depending on the tilt of the plate with respect to the sun, you might accidentally discover the "pseudoscopic" image of the "V," and it may appear to float *above* the surface of the plastic. Tilt the plate to bring the far edge up and towards you and you'll then find the "orthoscopic" image floating deep within the plate. If you had inscribed your entire name on the plastic, you'd now be seeing it down there within the surface. Xoïl Tattoos Xoïl is a tattooer at Needles Side Tattoo in Thonon-les-Bains, France. > facebook

Moss Graffiti—Next Big Thing This is the kind of thing they can't buff, and if "they" can, then we don't know how. We are talking about Moss Graffiti, and if you play your cards right, this is what you can be doing tonight to really "green" up the neighborhood. This is why we read Popular Mechanics. DIY at its finest.

Invisible Cities by Maria Popova What social media activity has to do with the literal lay of the land. In December, the now-infamous map of Facebook friendships revealed an uncanny cartography of the world depicted purely through social relationships data. Now, a project by Christian Marc Schmidt and Liangjie Xia is taking the concept ambitiously further: Invisible Cities is a transmedia mapping project, displaying geocoded activity from social networks like Twitter and Flickr within the context of an actual urban map — a visceral, literal embodiment of something VURB‘s Ben Cerveny has called “the city as a platform,” the idea that cities are informational media and living computational systems for urban society. By revealing the social networks present within the urban environment, Invisible Cities describes a new kind of city — a city of the mind.”

List of colors The following list shows a compact version of the colors in the List of colors A–F, G–M, and N–Z articles. The list shows the color and its name. Hovering over the color box shows the HSV, RGB, and #hex values for the color in the tool tip. List of Colors Synsepalum dulcificum The berry itself has a low sugar content[7] and a mildly sweet tang. It contains a glycoprotein molecule, with some trailing carbohydrate chains, called miraculin.[8][9] When the fleshy part of the fruit is eaten, this molecule binds to the tongue's taste buds, causing sour foods to taste sweet. At neutral pH, miraculin binds and blocks the receptors, but at low pH (resulting from ingestion of sour foods) miraculin binds protons and becomes able to activate the sweet receptors, resulting in the perception of sweet taste.[10] This effect lasts until the protein is washed away by saliva (up to about 60 minutes).[11] The names miracle fruit and miracle berry are shared by Gymnema sylvestre and Thaumatococcus daniellii,[2] which are two other species of plant used to alter the perceived sweetness of foods. History[edit]

Form Design with Sliding Labels « CSSKarma A few weeks ago I was reading an article on form UI by Luke Wroblewski of Yahoo!. For those who aren’t familiar with Luke, he (quite literally) wrote the book on good form design. In the article, one certain section about placing labels inside of form fields stood out to me: Because labels within fields need to go away when people are entering their answer into an input field, the context for the answer is gone. So if you suddenly forget what question you’re answering, tough luck—the label is nowhere to be found. As such, labels within inputs aren’t a good solution for long or even medium-length forms.

Photosynth Photosynth is a software application from Microsoft Live Labs and the University of Washington that analyzes digital photographs and generates a three-dimensional model of the photos and a point cloud of a photographed object.[1] Pattern recognition components compare portions of images to create points, which are then compared to convert the image into a model. Users are able to view and generate their own models using a software tool available for download at the Photosynth website. History[edit] Photosynth is based on Photo Tourism, a research project by University of Washington graduate student Noah Snavely.[2] Shortly after Microsoft's acquisition of Seadragon in early 2006, that team began work on Photosynth, under the direction of Seadragon founder Blaise Agüera y Arcas.[3] Microsoft released a free tech preview version on November 9, 2006. In March 2010, Photosynth added support for Gigapixel panoramas stitched in Microsoft ICE.