Food Cravings? Here Is What Your Body Really Wants~ 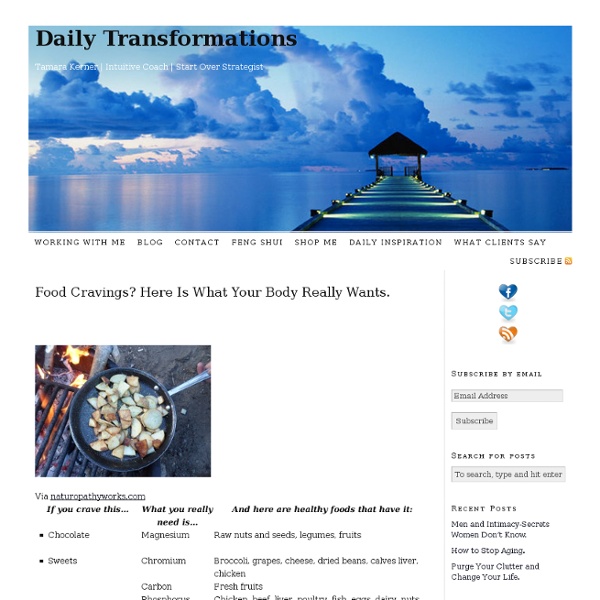 20 Simple Workout Snacks Nutrition Danielle LaFata March 26, 2010 Lilli Day / Getty Images 25 clever ideas to make life easier - StumbleUpon Via: amy-newnostalgia.blogspot.com Why didn’t I think of that?! We guarantee you’ll be uttering those words more than once at these ingenious little tips, tricks and ideas that solve everyday problems … some you never knew you had! (Above: hull strawberries easily using a straw). Via: apartmenttherapy.com 10 Power Food Combos The Oscar winning visionary filmmaker opened up during a Reddit AMA on Saturday afternoon. James Cameron, the acclaimed filmmaker behind sci-fi classics like Terminator, Aliens, and Terminator 2, as well as the blockbuster behemoths Titanic and Avatar, participated in a surprisingly candid Reddit AMA on Saturday afternoon. The self-proclaimed “king of the world” was online promoting Years of Living Dangerously, a 9-part documentary series about the filmmaking styles of top directors, which will premiere on Sunday, April 13 on Showtime. And Redditors, as is their wont, didn’t let Cameron off easy, prodding him with questions ranging from how to find missing Malaysia Airlines flight MH370—Cameron knows how, apparently!

Typography: 80+ Inspiring Creative Designs There can be many elements added to create a fantastic design. Stock photos and images, for example, are often used to help emphasis a design. However, the most popular aspect of recent design trends has been Typography. Combining creative designs with creative fonts. This post displays over 80 examples of inspiring creative designs using typography.

11 Worst Foods You Should Avoid or Limit There are no bad foods, right? Only food you should eat in moderation? Well, not really. The following foods are so bad for your body that there is not really any reason to eat them. Not only do they have zero nutritional value, but they also give your body a healthy dose of toxins, which should make the idea of eating them really hard to swallow. 1. Boxee's Live TV stick lets you joyfully end your cable subscription Boxee is releasing a new Live TV stick add-on for its streaming media set-top box that will allow owners to gain access to live television channels, the company announced today. The Live TV stick, which will be available in January 2012 for $49, is basically a high-powered HD antenna that provides Boxee Box owners with local channels like ABC, CBS, Fox, CW and NBC with no monthly fee. Of course, the HD signal has always been free for people in the U.S., but until now there’s never been a compelling reason for many to take advantage of it. Boxee is betting that the combination of free basic live TV channels with videos from services such as YouTube, Netflix, Hulu, Vimeo and others will be enough for many people to end their expensive cable subscriptions (a.k.a. cut the cord). It’s likely to work, too. In a new blog post, Boxee CEO Avner Ronen makes a compelling case for why cord cutting is soon to be on the rise.

7 Super Snacks That Heal If some doctors had their way today, Americans would be more medicated than industrial feedlot cattle. But what most people don’t realize is that the first line of defense against stress, fatigue, depression, and so many other maladies is found in supermarket aisles, not in the drug store. Research shows that the vitamins, minerals, and active compounds specific to certain fruits, vegetables, and even chocolate and red wine have an immediate and lasting impact on your mood, your health, your fitness — even your sex life. Whether you have a big presentation at work, or the need to burn a few hundred extra calories a day (and who doesn’t want to do that?), why not put food to work for you?

Mercedes Benz: Left Brain/Right Brain I saw these great Ads recently—which are absolutely amazing I reckon. These digital works were designed for Mercedes Benz cars, and are based upon the left/right brain functions: ★★★★★ Like this type of article? Why not subscribe for Free via RSS or Email. Singapore Personal Trainer As I was watching Blade III Trinity, I noticed the actor Ryan Reynolds. His physique in the movie is well-ripped, for the upperbody that is. The movie and image search online however didn’t reveal his lowerbody like the legs. So I won’t know if he has a proportional body, but I’m pretty sure girls like his body type right. Not too beefy, just right about well-muscled in all the areas. As for guys, I’m sure you want such six packs, nice chest, defined traps and such right … well here’s Ryan Reynolds Workout for you to emulate.

A very fascinating blog entry about what foods we crave and which we actually need. So think twice before you grab that chocolate bar and stuff your face with it... you might need something completly different. by tammster Oct 17