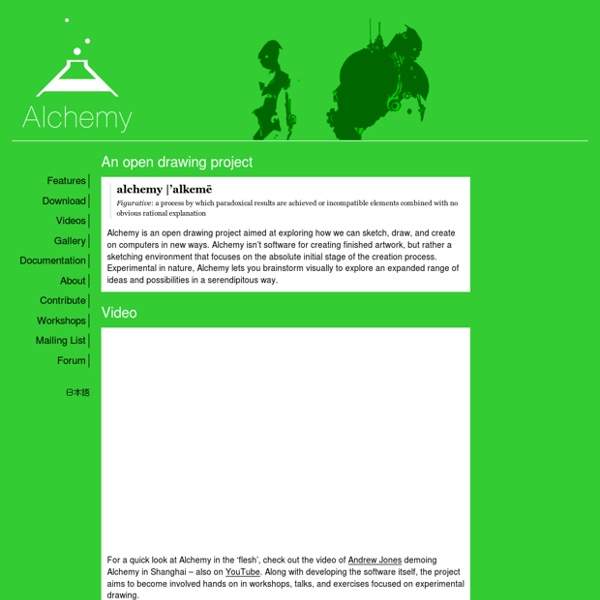 alchemy |’alkemē Figurative: a process by which paradoxical results are achieved or incompatible elements combined with no obvious rational explanation Alchemy is an open drawing project aimed at exploring how we can sketch, draw, and create on computers in new ways. Alchemy isn’t software for creating finished artwork, but rather a sketching environment that focuses on the absolute initial stage of the creation process. Experimental in nature, Alchemy lets you brainstorm visually to explore an expanded range of ideas and possibilities in a serendipitous way. For a quick look at Alchemy in the ‘flesh’, check out the video of Andrew Jones demoing Alchemy in Shanghai – also on YouTube.

19 Factors That Impact Compositional Balance Imagine a boulder leaning too far over the cliff’s edge. Seeing that boulder you think it should come crashing down the mountainside. It’s out of balance and you feel the tension of the impending crash. A similar feeling happens in your visitors when the composition of your design is visually out of balance. In a couple of previous posts I talked about visual balance and in each I briefly mentioned the idea of visual weight in order to achieve visual balance. There’s more to visual balance than I mentioned in those previous posts and I thought the topic deserving of its own post. Character Design 2: Primer What makes good character designs for animation? This is a difficult subject. The real answer is a talented character designer who understands character. No amount of abstract ingredients can make an artist into a designer if he doesn't have the gift.

Doug Jack ordinarily Extraordinary everyday Doug Jack, Crayon Creator Art fully redefined! January 2013 Gearbox has been at it for a few years with Aliens: Colonial Marines, and I'd go as far as say that this game's been stuck in development hell, with it's development cycle starting around 2006. The concept for the game is solid, with a plotline spanning between the events of Aliens and Alien 3 regarding a search team with orders to investigate the U.S.S. Sulaco and figure out what happened to Ripley, Colonel Hicks and the rest of the team dispatched to LV-246. From a story sense, the game is so canon that the title is officially a part of the Aliens franchise.

Create Games with Construct 2 The Construct 2 start page Quick & Easy Bring your work to life in hours and days instead of weeks and months. With Construct 2 making games is a piece of cake: just drag and drop objects around, add behaviors to them, and make everything come alive with events! With a quick and easy to grasp Ribbon interface, you have clear access to a wide set of tools that allows anyone to jump into game creation with little to no prior game development knowledge.

Closer to Van Eyck The panels of the Ghent Altarpiece are coated with layers of varnish. Varnish serves as a protective coating for paint layers and has important optical functions, since it saturates a painting's colors and creates a more even surface. However, most varnishes gradually degrade over time, getting brittle and opaque, and becoming a darkened and yellowed layer that can dramatically impact the perception of a painting's colors and tonal values. Since a degraded varnish will make the dark areas appear lighter, it will also affect our perception of the rendering of volume and space. Applying a new layer of varnish over a degraded one can sometimes improve the situation for a time, but restorers routinely remove and replace old varnish layers. During the 2010 urgent conservation treatment of the Ghent Altarpiece, cleaning tests were performed to establish the condition, compounds used, and solubility of the varnish layers.

10 Useful Web Apps for Designers DesignWoop welcomes this guest post by Tomas Laurinavicius. Since the iPhone and iPad entered the market you can hear lots of news about apps for these devices. Tons of apps available today and you can find everything you want. But today I would like to share 10 handy web-based apps for designers. Imaging the paintings under the paintings of the Old Masters Public release date: 29-Mar-2011 [ Print | E-mail Share ] [ Close Window ] Contact: Michael Bernstein m_bernstein@acs.org 714-765-2012 (Meeting, March 27-31) 202-872-6042 (Before March 27)

little girls R better at designing heroes than you Little Girls Are Better At Designing Superheroes Than You is a project where superheroes are drawn based on the costumes of young girls. This submission is drawn by the talented SaEun Moon at This submission is Amazing Girl! 50 Open Source Mobile Tools In a relatively short period of time, mobile devices have become ubiquitous in the workplace. A recent survey of enterprise and small business workers found that just 3 percent of organizations ban their employees from using personal iPads or iPhones for business use, and only 7 percent ban Android devices. In fact, 40 percent of organizations provide iPhones for more than a quarter of employees, and 25 percent provide Android-based smartphones.

Crazy Illustrations By Chow Hon Lam Chow Hon Lam is a t-shirt designer and a humorous illustrator from Malaysia. He has been completed this crazy project called Flying Mouse 365, which is create 1 design per day. I hope his illustrations can bring some smile and entertainment to the world. About the author