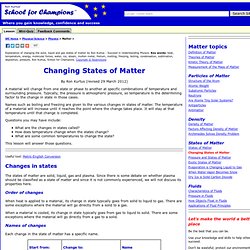 Key words: heat, temperature, energy, molecular forces, water, ice, steam, molten metal, Helium, melting, freezing, boiling, condensation, sublimation, deposition, pressure, Ron Kurtus, School for Champions. Copyright © Restrictions By Ron Kurtus (revised 29 March 2012) A material will change from one state or phase to another at specific combinations of temperature and surrounding pressure. Names such as boiling and freezing are given to the various changes in states of matter. Questions you may have include: What are the changes in states called? This lesson will answer those questions.

Useful tool: Metric-English Conversion Changes in states The states of matter are solid, liquid, gas and plasma. Order of changes When heat is applied to a material, its change in state typically goes from solid to liquid to gas. Melting Boiling. Matter: Changing States. All matter can move from one state to another. 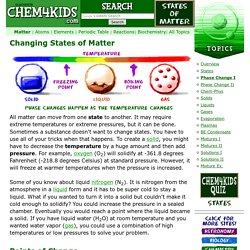 It may require extreme temperatures or extreme pressures, but it can be done. Sometimes a substance doesn't want to change states. You have to use all of your tricks when that happens. To create a solid, you might have to decrease the temperature by a huge amount and then add pressure. For example, oxygen (O2) will solidify at -361.8 degrees Fahrenheit (-218.8 degrees Celsius) at standard pressure. Some of you know about liquid nitrogen (N2). Phase changes happen when you reach certain special points. Generally, solids are more dense than liquids because their molecules are closer together. There are always exceptions in science. Imagine that you are a solid. There is a special temperature for every substance called the melting point. If you were salt, sugar, or rock, your melting point is higher than that of water. You know about solids melting and becoming liquids. Can you go from a gas to a solid?

► More on Phase Changes in Part II... Science Experiments You Can Do At Home or School. Matter: Chemical vs. Physical Changes. It is important to understand the difference between chemical and physical changes. 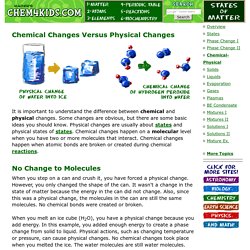 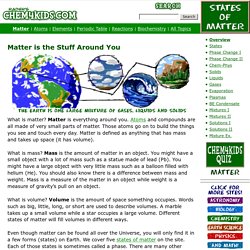 Matter is everything around you. Atoms and compounds are all made of very small parts of matter. Those atoms go on to build the things you see and touch every day. Matter is defined as anything that has mass and takes up space (it has volume). What is mass? What is volume? Even though matter can be found all over the Universe, you will only find it in a few forms (states) on Earth. Fun Science Experiments for Kids - Cool Projects & Easy Ideas for Children.

Diet Coke & Mentos Geyser Eruption. What you'll need: Large bottle of Diet Coke About half a pack of Mentos Geyser tube (optional but makes things much easier) Instructions: Make sure you are doing this experiment in a place where you won't get in trouble for getting Diet Coke everywhere. 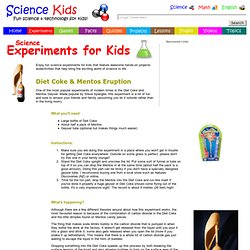 Outside on some grass is perfect, please don't try this one in your family lounge!! Stand the Diet Coke upright and unscrew the lid. What's happening? Although there are a few different theories around about how this experiment works, the most favoured reason is because of the combination of carbon dioxide in the Diet Coke and the little dimples found on Mentos candy pieces. The thing that makes soda drinks bubbly is the carbon dioxide that is pumped in when they bottle the drink at the factory. Dropping something into the Diet Coke speeds up this process by both breaking the surface tension of the liquid and also allowing bubbles to form on the surface area of the Mentos. Fun Chemistry Facts for Kids - Elements, Atoms, Gas, Cool Chemicals.