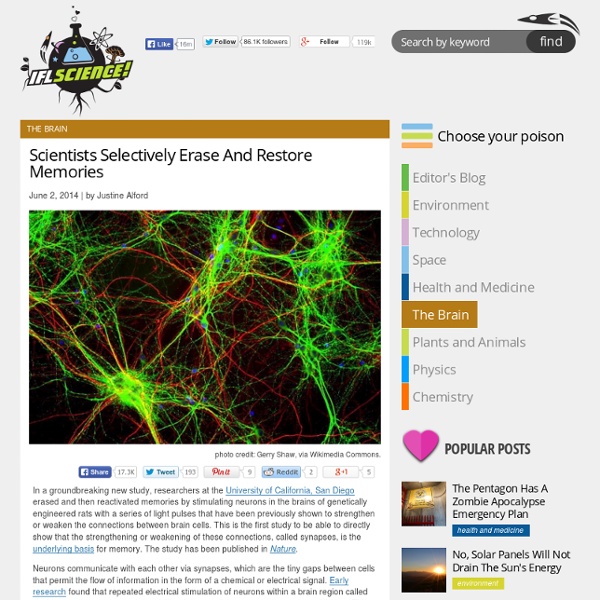 Related:  it's all in the mind • Brainwashing and Social engineering

How "SuperAger" Brains Are Different Than Everyone Else's Researchers working with SuperAgers—people aged 80 and up with impeccable memory—reveal how their brains look decades younger. And compared to others their age, SuperAgers have nearly 90 percent fewer brain “tangles” linked to Alzheimer’s disease. The findings were published in the Journal of Neuroscience last week. First identified in 2007, the so-called cognitive SuperAgers displayed memories as sharp as people 20 to 30 years younger than them. In a preliminary study, researchers found that a particular region of their cortex was thicker than that of middle-aged participants. Compared with 21 similarly aged people, as well as 18 volunteers aged 50 through 60, SuperAgers have an unusual brain signature characterized by three main components: a thicker, larger region of the cortex, significantly fewer neurofibrillary tangles (a marker of Alzheimer’s), and a huge supply of a neuron called von Economo, which has been linked to higher social intelligence. Images: shutterstock.com (top), T.

Mind Control, Subliminal Messages and the Brainwashing of America 25th February 2016 By Carolanne Wright Contributing Writer for Wake Up World “Is the purpose of the TV ad to make you an informed consumer?” asks Noam Chomsky. In October of 2011, the American Academy of Pediatrics issued a warning, advising that children under the age of two should not be exposed to television because it can lead to developmental disorders, delayed speech and sleep problems. Add to this governmental propaganda and we would be hard-pressed to have an uninfluenced and unique thought about anything. In 2013, the Broadcasting Board of Governors (BBG) revoked a longstanding federal law that made it illegal for the U.S. To Jeff Warrick, this is unacceptable. Subliminal Messages: Harmless or Damaging? “You need to make people feel at risk in order to promote sales. Some would argue that subliminal messages found in the realm of advertising are not all bad. Politicians certainly aren’t above resorting to subliminal messages. Where does this leave us? Programming the Nation

Why Painful Memories Linger Memories of traumatic events can be hard to shake, and now scientists say they understand why. Studies on laboratory rats have revealed, for the first time, the brain mechanism that translates unpleasant experiences into long-lasting memories. The findings support a 65-year-old hypothesis called Hebbian plasticity. The new findings are not only an important advance in researchers' understanding of how Hebbian plasticity works, but they also may lead to treatments to help patients forget horrible memories, such as those associated with post-traumatic stress disorder (PTSD). The study, by researchers at New York University and Japan's RIKEN Brain Science Institute, appears today (Dec. 8) in the Proceedings of the National Academy of Sciences. Hebbian plasticity, the thinking goes, works when a brain region called the amygdala allows sensory stimuli to become associated with either rewarding or aversive outcomes, thus producing emotional memories.

How brain waves guide memory formation Our brains generate a constant hum of activity: As neurons fire, they produce brain waves that oscillate at different frequencies. Long thought to be merely a byproduct of neuron activity, recent studies suggest that these waves may play a critical role in communication between different parts of the brain. A new study from MIT neuroscientists adds to that evidence. The researchers found that two brain regions that are key to learning — the hippocampus and the prefrontal cortex — use two different brain-wave frequencies to communicate as the brain learns to associate unrelated objects. “It’s like you’re playing a computer game and you get a ding when you get it right, and a buzz when you get it wrong. Furthermore, these oscillations may reinforce the correct guesses while repressing the incorrect guesses, helping the brain learn new information, the researchers say. Signaling right and wrong Miller believes the same thing is happening during this learning task. Enhancing memory

Social engineering (security) One example of social engineering is an individual who walks into a building and posts an official-looking announcement to the company bulletin that says the number for the help desk has changed. So, when employees call for help the individual asks them for their passwords and IDs thereby gaining the ability to access the company's private information. Another example of social engineering would be that the hacker contacts the target on a social networking site and starts a conversation with the target. Gradually the hacker gains the trust of the target and then uses that trust to get access to sensitive information like password or bank account details.[citation needed] Social engineering relies heavily on the 6 principles of influence established by Robert Cialdini. Phishing is a technique of fraudulently obtaining private information. The act of using SMS text messaging to lure victims into a specific course of action. Quid pro quo means something for something: A very recent[when?]

Scientists Implant False Memories Into Sleeping Mice Even the best brains have imperfect memories. We often forget things, and many people even sometimes remember things that did not happen, which are known as false memories. While we know it is possible to implant such fabricated recollections into our minds merely through suggestion, scientists are now beginning to demonstrate it is also possible to do this with the aid of sophisticated technology, albeit in animals, not humans. Just last year, for example, researchers managed to make mice wrongly associate an environment with an unpleasant experience from a different place using a combination of gene editing and light stimulation of brain cells. Now, taking this one step further, researchers from the French National Center for Scientific Research have successfully implanted artificial memories into the minds of snoozing mice, a first for neuroscience. To identify these place cells, the researchers allowed the animals to explore their environment whilst recording neuronal activity.

The Effect of External Energies in Your Space By Caroline Diana Bobart From an intuitive standpoint, your aura or personal space is separated from the outer world by a permeable membrane of external energies. This turns you into a multi-dimensional, etheric telephone exchange of sorts! For better or for worse, you are constantly receiving and transmitting spoken and unspoken communication with the world around you through the medium of energy. This, in turn, registers upon your sensations, feelings, and thoughts. Most people are generally unaware of the inherent nature of their auras. The effect of these ongoing, for lack of a better word, conversations on your heart and mind/body system, sense of self, self-assuredness, and self-esteem are closely related to your current level of alignment with your most authentic self. When you respond to life from a still place of inner knowing and wisdom, you tend to instinctively engage more of the situations and relationships that honor your deepest needs and truth.

Fourteen Propaganda Techniques Fox "News" Uses to Brainwash Americans There is nothing more sacred to the maintenance of democracy than a free press. Access to comprehensive, accurate and quality information is essential to the manifestation of Socratic citizenship - the society characterized by a civically engaged, well-informed and socially invested populace. Thus, to the degree that access to quality information is willfully or unintentionally obstructed, democracy itself is degraded. It is ironic that in the era of 24-hour cable news networks and "reality" programming, the news-to-fluff ratio and overall veracity of information has declined precipitously. Take the fact Americans now spend on average about 50 hours a week using various forms of media, while at the same time cultural literacy levels hover just above the gutter. My curiosity about this question compelled me to sit down and document the most oft-used methods by which willful ignorance has been turned into dogma by Fox News and other propagandists disguised as media. 1. 2. 3. 4. 5. 6. 7.

Light-activated heart cells help guide robotic stingray View the video Even robots can use a heart. Or heart cells, at least. A new stingray bot about the size of a penny relies on light-sensitive heart cells to swim. The new work “extends the state of the art — very much so,” says bioengineer Rashid Bashir of the University of Illinois at Urbana-Champaign. For decades, the field of robotics has been dominated by bulky, rigid machines made mostly of metal or hard plastic. So far, there’s just a handful of papers on these hybrid machines, says Bashir, whose own lab recently reported the invention of tiny, muscle-wrapped bots that inch along like worms in response to light. In 2012, Parker’s team built a robotic jellyfish out of silicone and heart muscle cells. But, Parker says, “the jellyfish just swam.” He explains the team’s strategy with a story about his daughter. Parker guides his stingray bot in a similar way. Layered on top of the bot’s body — a gold skeleton sandwiched between layers of silicone — lies a serpentine pattern of cells. K.

How to Stop Absorbing Other People’s Emotions Emotions such as fear, anger, frustration, and immobility are energies. And you can potentially ‘catch’ these energies from people without realizing it. If you tend to be an emotional sponge, it’s vital to know how to avoid taking on an individual’s negative emotions, or even how to deflect the free-floating negativities in crowds. Another twist is that chronic anxiety, depression, or stress can turn you into an emotional sponge by wearing down your defenses. From an energetic standpoint, negative emotions can originate from several sources: what you’re feeling may be your own; it may be someone else’s; or it may be a combination. Stop Absorbing Other People’s Emotions 1. People call you “hyper-sensitive”, “overly sensitive”, etc., and they don’t mean it as a compliment! 2. 3. 4. 5. Place your palm on your solar plexus as you keep sending loving-kindness to that area to flush stress out.For longstanding depression or anxiety, use this method daily to strengthen this center. 6. 7. 8. 9.

Related:
Related:  it's all in the mind   -  Brainwashing and Social engineering