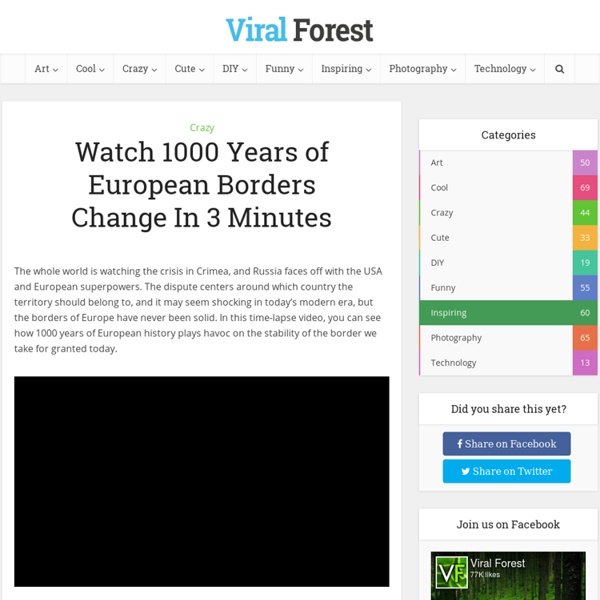 The whole world is watching the crisis in Crimea, and Russia faces off with the USA and European superpowers. The dispute centers around which country the territory should belong to, and it may seem shocking in today’s modern era, but the borders of Europe have never been solid. In this time-lapse video, you can see how 1000 years of European history plays havoc on the stability of the border we take for granted today. This time-lapse video has never been more relevant. As the eyes of the world are fixed on events in Ukraine and Crimea, its good to have a little perspective on the ever-changing flux of borders throughout time. Very cool!

Iconographic Database The Warburg Institute Iconographic Database contains digitised images from the Institute's Photographic Collection and Library. The material for which the Warburg Institute holds the copyrights is licensed under a Creative Commons Attribution-Non Commercial 3.0 Unported License. Search by iconographic keywords or browse the iconographic classification system.To search by artist, date, location, or other parameters, please use the advanced search menu. The iconographic classification system of the database is based on that of the Warburg Institute Photographic Collection. Please note, however, that the database is not the digital equivalent of the Photographic collection. “Intellectual Dark Web” – Basics Eric R. Weinstein, 12. Jan : Just making up an initial private list for myself as to who my “Intellectual Dark Web” would be. If you have a top 10 list you don’t mind sharing, I’d be super curious to know who y’all are listening to outside of institutional/corporate news, media and analysis. After a few weeks of dabbling, I made a list of around a hundred, and then I selected ten.

Women's March Is The Biggest Protest In US History As An Estimated 2.9 Million March Millions of Americans have taken to the streets from New York to Los Angeles and everywhere in between as the Women’s Marches on Washington is estimated to be the biggest one-day protest in US history. UConn professor Jeremy Pressman is keeping a running total of crowd estimates across the United States in a Google document. An estimated 60,000 people marched in Atlanta. 250,000 are marching in Chicago. There are estimates of 250,000 people in Boston, and 200,000 more in Denver. In New York, the estimate ranges from 200,000-500,000. City officials estimate that 500,000 people participated in the main march in Washington, DC. Ancestral Lines 2 clicks please Evolutionary biologists use a cladogram, the treelike diagram of evolutionary branches or clades, to organize species into lines of evolutionary descent across time. Biologists use three types of evidence to deduce evolutionary connections: genetics, morphology, and geologic dating. (Behavior, normally a key part of evolutionary studies, can only be inferred in extinct species — for example, by examining the ecology in which the species flourished and the species adaptations for eating and locomotion.) Analyses of primate fossils and the genetic relatedness of living primates converge to the conclusion that humans and chimpanzees branched from a common ancestor about 7 million years ago. DNA recovered from several uncontaminated Neanderthalensis fossils indicated that modern humans and extinct neanderthals diverged about 400,000 years ago; but more recent studies show that they must have interbred within Europe or the Middle East since then.

The life and reign of English kings and queens visualised Primogeniture is a pain. You can spend all your life waiting to be king or queen and then just have a few years on the throne - or you could be ruling for basically all of your life, which is probably a lot of responsibility. Elizabeth II is under a year away from becoming the longest reigning monarch in the history of England or the United Kingdom - Victoria was on the throne for 63 years - with this in mind we were inspired to look at how other post-Norman conquest rulers have lasted. The gold line shows how many years (in decimals) the monarch reigned and the blue shows the years of their life when they were not the country’s monarch. Although it is not quite as straightforward as it seems.

Fix TiWorker.exe High Disk Usage on Windows 10 - Driver Easy You may be in a situation where your computer is running slowly. In the hope of figuring the reason out, you open Task Manager, and find that a process named TiWorker.exe (or Windows Module Installer Worker) is causing the trouble. It is using too much system resources, resulting in high disk (and CPU) usage. At this point you surely want to know what this process is and how to do to stop it from slowing down your computer. 40 maps that explain the world By Max Fisher By Max Fisher August 12, 2013 Maps can be a remarkably powerful tool for understanding the world and how it works, but they show only what you ask them to. So when we saw a post sweeping the Web titled "40 maps they didn't teach you in school," one of which happens to be a WorldViews original, I thought we might be able to contribute our own collection.

Women’s March Los Angeles draws estimated 750K: ‘This is what we do as Americans’ Fired up by what they call an election cycle that left them insulted and their rights threatened, hundreds of thousands of women — and the men who support them — gathered in downtown Los Angeles on Saturday as part of a nationwide act of solidarity to send a message to President Donald Trump’s administration. An estimated 750,000 people brought that message to L.A.’s packed streets in a loud but peaceful stand for equal rights and a defense of civil liberties. • Live Coverage: Women’s March Los Angeles and other protests On the half-mile route from Pershing Square to City Hall, they held up signs, some with graphic images and language directed at Trump, who took the office on Friday.