22 Of The Best Short Animated Films 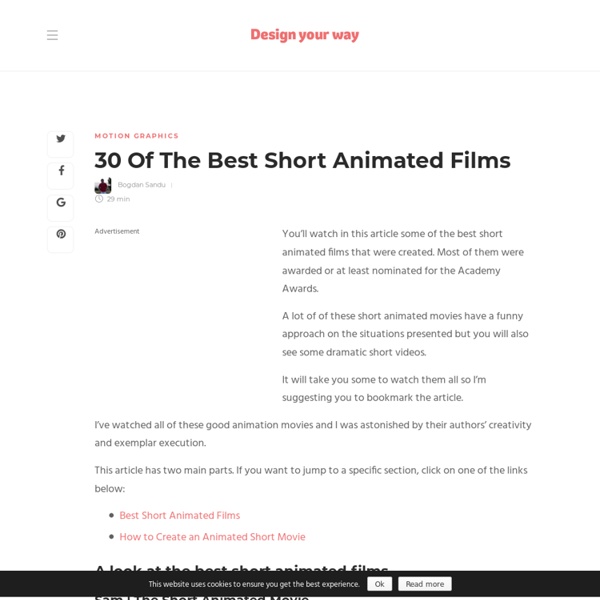 Keith Lango Tutorials Calvin and Hobbes Snow Art Gallery Snow Art in ColourSend Calvin and Hobbes Postcards Online! Calvin and Hobbes Fan Page Email: mailkate20@yahoo.com CodeSprint Fall 2011 - InterviewStreet Hiring For: PHP developer/designer Company Description: Chachii.com is bringing to India what TaskRabbit is bringing to the US. Who are the users / clients? Chachii.com is revolutionizing India's incredibly disorganized labor market. How does the company make money? We make money from our consumer customers through a simple brokerage model. What’s the biggest misconception about the company? That we're a job agency. How many people work in the company? We 6: We have two founders (who handle tech and non-tech), two call center employees, one head of Operations, and one head of PR.

False memory syndrome False memory syndrome (FMS) describes a condition in which a person's identity and relationships are affected by memories which are factually incorrect but are strongly believed.[1] Peter J. Freyd originated the term, which the False Memory Syndrome Foundation (FMSF) subsequently popularized. The term is not recognized as a mental disorder[3] in any of the medical manuals, such as the ICD-10[4] or the DSM-5;[5] however, the principle that memories can be altered by outside influences is overwhelmingly accepted by scientists.[6][7][8][9] False memories may be the result of recovered memory therapy, a term also defined by the FMSF in the early 1990s,[10] which describes a range of therapy methods that are prone to creating confabulations. Some of the influential figures in the genesis of the theory are forensic psychologist Ralph Underwager, psychologist Elizabeth Loftus and sociologist Richard Ofshe. Definition[edit] False memory syndrome is defined as: Recovered memory therapy[edit] [edit]

Chromebook: 'Father of Google Apps' Raises Second Child | Wired Enterprise Google's Rajen Sheth and his new baby: the Chromebook. Photo: Jim Merithew/Wired.com. Rajen Sheth was grinning from ear to ear. And he looked barely old enough to shave. But his answer carried some serious weight. “Gmail,” he said. It was 2004, and Sheth was interviewing for a job with Google’s enterprise division. Google enterprise vet Matt Glotzbach remembers Sheth’s immediate response as a lighthearted moment. Seven years later, Sheth is widely known as the “father of Google Apps,” the online office apps suite he built around Gmail and grew into a service that 4 million businesses now use in lieu of traditional desktop packages such as Microsoft Office and Lotus Notes. Late last year, Sheth left the Apps business to lead a new charge into the enterprise, urging businesses to move away from traditional hard-drive-equipped machines running local applications and embrace a new breed of stripped-down laptop that runs all apps inside a web browser: the Google Chromebook.

Quick Screen Share Animated Short Movies » Life-Changing Arts Movie shorts, or short animations are a unique form of art, which can inspire and enlighten just like any other art form. Sometimes even more so. Here is a selection of inspiring, or for some reason animated short movies, here shown in their original full length. Thanks to all the visitors who have contributed with their detailed suggestions! That is why there are now two pages of great animated shorts! If you think there is a short animated movie that should be added, let us know which, and why. The below movies are not sorted in any particular order. French Toast Written and directed by Fabrice O. The Lady and the Reaper Written and directed by Javier Recio Gracia Get Out By Charlotte Boisson, Julien Fourvel, Pascal Han-Kwan, Tristan Reinarz and Fanny Roche Granny O'Grimm Directed by Nicky Phelan, produced by Brown Bag Films Oktapodi By Julien Bocabeille, Francois-Xavier Chanioux, Olivier Delabarre, Thierry Marchand, Quentin Marmier and Emud Mokhberi Big Buck Bunny Life Line Created by Tomek Ducki