Everything You Know About Composting is Wrong: Mike McGrath at TEDxPhoenixville 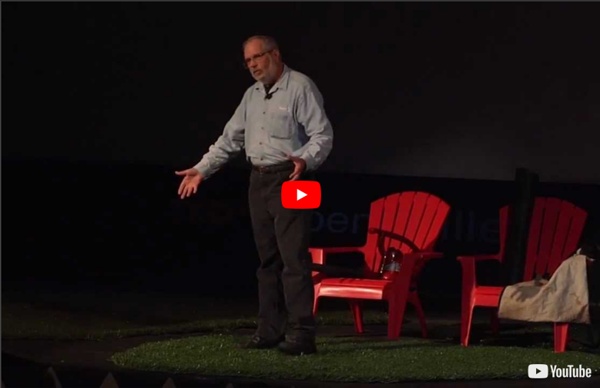 Build a $300 underground greenhouse for year-round gardening (Video) Growers in colder climates often utilize various approaches to extend the growing season or to give their crops a boost, whether it's coldframes, hoop houses or greenhouses. Greenhouses are usually glazed structures, but are typically expensive to construct and heat throughout the winter. A much more affordable and effective alternative to glass greenhouses is the walipini (an Aymara Indian word for a "place of warmth"), also known as an underground or pit greenhouse. Here's a video tour of a walipini that shows what a basic version of this earth-sheltered solar greenhouse looks like inside: © Benson Institute It's a pretty intriguing set-up that combines the principles of passive solar heating with earth-sheltered building. The Walipini utilizes nature’s resources to provide a warm, stable, well-lit environment for year-round vegetable production. SilverThunder/via Cheap but effective, the underground greenhouse is a great way for growers to produce food year-round in colder climates.

Principles Managing soil carbon: Data available on Soil organic Carbon Green Book Club Meeting: Dirt - The Erosion of Civilisations - University of Plymouth Save event This Plymouth Green Book Club meeting will be discussing the book, Dirt: The Erosion of Civilisations by Professor David Montgomery. Dirt, soil, call it what you want - it's everywhere we go. It is the root of our existence, supporting our feet, our farms, our cities. This fascinating yet disquieting book finds, however, that we are running out of dirt, and it's no laughing matter. An engaging natural and cultural history of soil that sweeps from ancient civilisations to modern times, Dirt: The Erosion of Civilisations explores the compelling idea that we are - and have long been - using up Earth's soil. Once bare of protective vegetation and exposed to wind and rain, cultivated soils erode bit by bit, slowly enough to be ignored in a single lifetime but fast enough over centuries to limit the lifespan of civilisations. All are welcome to this free event and it is not essential to have read any or all of the book.

Shower Door Compost Bin Supplies Three 12-foot untreated 2-by-12 boards 16-penny nails Two 52 ½-inch 2-by-4s One 44-by-55 ½-inch piece of sheet metal (approx.) Two 34-by-42 ½-inch pieces of 38-inch plywood One 16-by-55 ½-inch piece of plywood Two 25-by-26-inch pieces of plywood 16-penny nails Composite shingles Old shower door Seven hinges with screws Handle with screws Hook and eye Small sliding bolt Composite shingles Wood preservative paint 1. 2. 3. 4. 5. 6. 7. 8. 9. 10. Roxbury Farm | Define Permaculture In this lesson you will learn: One definition of permaculture The term permaculture has many definitions The origin of permaculture Who is practicing permaculture "Permaculture is a philosophy of working with, rather than against nature; of protracted & thoughtful observation rather than protracted & thoughtless labour; of looking at plants & animals in all their functions, rather than treating any area as a single-product system." Bill Mollison (from the permaculture.net website) This definition of permaculture expresses a basic concept in permaculture - examining and following nature's patterns. Permaculture advocates designing human systems based on natural ecosystems. The term permaculture is a contraction of the words "permanent," "agriculture,” and “culture.” What is the origin of permaculture? Permaculture was created in the 1970's by Bill Mollison, an Australian ecologist and University of Tasmania professor. Who is practicing permaculture? How can you practice permaculture?

Soil health Soil health is a state of a soil meeting its range of ecosystem functions as appropriate to its environment. Soil health testing is an assessment of this status.[1] Soil health depends on soil biodiversity (with a robust soil biota), and it can be improved via soil conditioning (soil amendment). Aspects[edit] The term soil health is used to describe the state of a soil in: Sustaining plant and animal productivity and biodiversity (Soil biodiversity);Maintaining or enhance water and air quality;Supporting human health and habitation.[2] Soil Health has partly if not largely replaced the expression "Soil Quality" that was extant in the 1990s. The underlying principle in the use of the term “soil health” is that soil is not just an inert, lifeless growing medium, which modern farming tends to represent, rather it is a living, dynamic and ever-so-subtly changing whole environment. Using the human health analogy, a healthy soil can be categorized as one: Conceptualisation[edit] Measurement[edit]