Joanna Macy: On how to prepare internally for WHATEVER comes next. Weathering the Energetic Storm, Inside and Out. Leading neuroscientists and Buddhists agree: “Consciousness is everywhere" Neuroscientist Christof Koch discusses scientific theories of consciousness with the Dalai Lama. 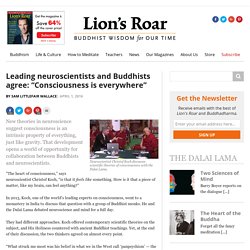 New theories in neuroscience suggest consciousness is an intrinsic property of everything, just like gravity. Minds Everywhere: 'Panpsychism' Takes Hold in Science. SAN FRANCISCO — Are humans living in a simulation? 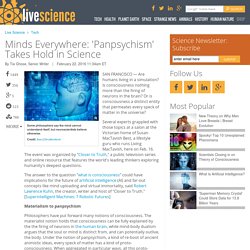 Is consciousness nothing more than the firing of neurons in the brain? Or is consciousness a distinct entity that permeates every speck of matter in the universe? Several experts grappled with those topics at a salon at the Victorian home of Susan MacTavish Best, a lifestyle guru who runs Living MacTavish, here on Feb. 16. The event was organized by "Closer to Truth," a public television series and online resource that features the world's leading thinkers exploring humanity's deepest questions.

The answer to the question "what is consciousness" could have implications for the future of artificial intelligence (AI) and far-out concepts like mind uploading and virtual immortality, said Robert Lawrence Kuhn, the creator, writer and host of "Closer to Truth. " Materialism to panpsychism Philosophers have put forward many notions of consciousness. Have You Heard of The Great Forgetting? It Happened 10,000 Years Ago & Completely Affects Your Life. By Deep Ecology Hub / deep-ecology-hub.com This article summarizes the ideas of Daniel Quinn, first written about in The Story of B, which was a sequel to Ishmael. 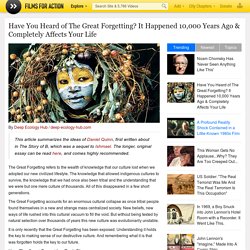 The longer, original essay can be read here, and comes highly recommended. The Great Forgetting refers to the wealth of knowledge that our culture lost when we adopted our new civilized lifestyle. The knowledge that allowed indigenous cultures to survive, the knowledge that we had once also been tribal and the understanding that we were but one mere culture of thousands.

The Present - Universal Truth - The Ultimate Truth. A man should look for what is and not for what he thinks should be. 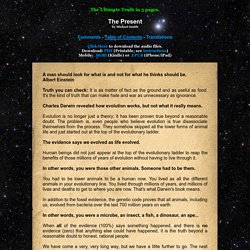 Albert Einstein Truth you can check: It is as matter of fact as the ground and as useful as food. It's the kind of truth that can make hate and war as unnecessary as ignorance. Charles Darwin revealed how evolution works, but not what it really means. Evolution is no longer just a theory; it has been proven true beyond a reasonable doubt.

The evidence says we evolved as life evolved. Human beings did not just appear at the top of the evolutionary ladder to reap the benefits of those millions of years of evolution without having to live through it. The Present - Universal Truth - The Ultimate Truth. How Your Dominant Beliefs Control Your Life. By: Jason Demakis The following assertion is one that has been reached through much personal study, growth, experimentation, experience, and correlation with others from within the arena of emotional intelligence: We are not our thoughts. 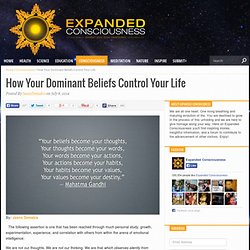 We are not our thinking. We are that which observes silently from behind the mind. Further more, our beliefs are what fuel the nature of our daily experiences entirely, as well as open us up to or limit us from choices and opportunities which are completely neutral and available to us at all times – regardless of our personal beliefs (see how that works) about their availability. Now, this is far from a new concept; many authors, scholars, and ancient peoples understood this very basic principle. Consciousness Circuitry Simply put: we don’t actually experience anything until we start running our consciousness through it, like electricity through a circuit.

This then makes that particular circuit seem “real”. You Always Take SOMETHING to Be True… Ancient Egypt and the Pineal Gland - TIMEWHEEL. 5 Thought-Provoking Quantum Experiments Showing That Reality Is an Illusion. No one in the world can fathom what quantum mechanics is, this is perhaps the most important thing you need to know about it. 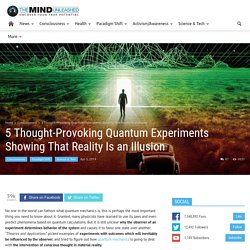 Granted, many physicists have learned to use its laws and even predict phenomena based on quantum calculations. The Great Questions in the Hamburger Universe by Miceal Ledwith - Index. 10 Spiritually Transmitted Diseases - : SHIFT> It is a jungle out there, and it is no less true about spiritual life than any other aspect of life. 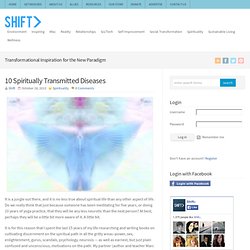 Do we really think that just because someone has been meditating for five years, or doing 10 years of yoga practice, that they will be any less neurotic than the next person? At best, perhaps they will be a little bit more aware of it. A little bit. It is for this reason that I spent the last 15 years of my life researching and writing books on cultivating discernment on the spiritual path in all the gritty areas–power, sex, enlightenment, gurus, scandals, psychology, neurosis — as well as earnest, but just plain confused and unconscious, motivations on the path.

My partner (author and teacher Marc Gafni) and I are developing a new series of books, courses and practices to bring further clarification to these issues. Several years ago, I spent a summer living and working in South Africa. 5 Thought-Provoking Quantum Experiments Showing That Reality Is an Illusion. Ω Sacred G Guide Ω. The Greatest Epidemic Sickness Known to Humanity. The following is Part One in a series. 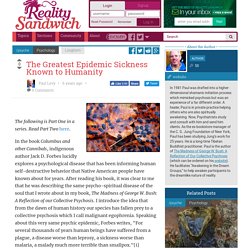 The power of your subconscious. Your subconscious mind knows everything there is to know – it knows exactly how to guide you and drop you into the optimum position in the game of everyday life every time. 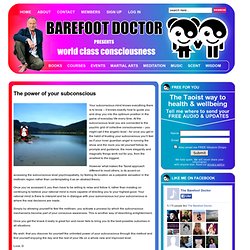 At the subconscious level you are connected to the psychic grid of collective consciousness – you might call it the angelic level - for once you get in the habit of trusting your subconscious you’ll feel as if your inner guardian angel is running the show and the more you let yourself follow its prompts and guidance, the more elegantly and magically things work out for you, from the smallest to the biggest. However what makes the Taoist approach different to most others, is its accent on accessing the subconscious level psychospatially, by feeling its location as a palpable sensation in the midbrain region rather than contemplating it as an abstract theory.

Simply by allowing yourself to feel the midbrain, you activate a process by which the subconscious mechanisms become part of your conscious awareness. Barefoot Doctor - 3 Ways to Shift Your Perspective. Posted: 12 Nov 2012 Tags: tao. 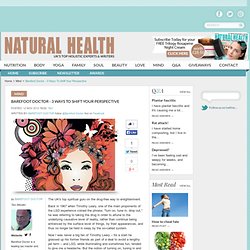