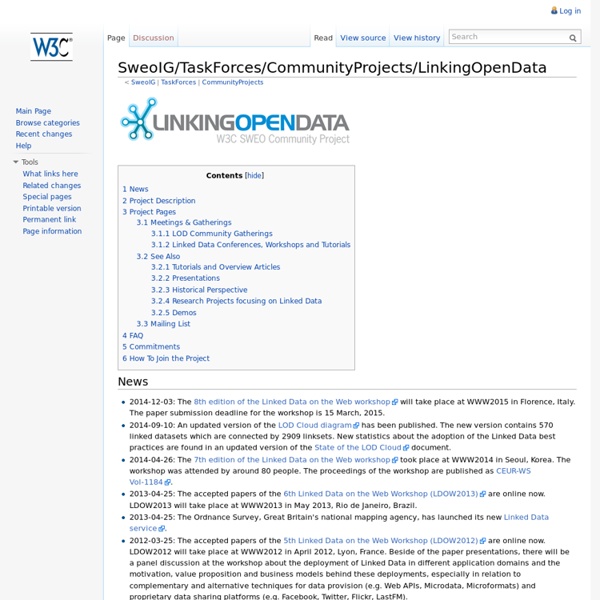 News 2014-12-03: The 8th edition of the Linked Data on the Web workshop will take place at WWW2015 in Florence, Italy. The paper submission deadline for the workshop is 15 March, 2015. 2014-09-10: An updated version of the LOD Cloud diagram has been published. The new version contains 570 linked datasets which are connected by 2909 linksets. New statistics about the adoption of the Linked Data best practices are found in an updated version of the State of the LOD Cloud document. 2014-04-26: The 7th edition of the Linked Data on the Web workshop took place at WWW2014 in Seoul, Korea. The workshop was attended by around 80 people. Project Description The Open Data Movement aims at making data freely available to everyone. The goal of the W3C SWEO Linking Open Data community project is to extend the Web with a data commons by publishing various open data sets as RDF on the Web and by setting RDF links between data items from different data sources. Clickable version of this diagram. Demos

Using Dublin Core - The Elements NOTE: This text was last revised in 2005. As of 2011, a completely revised User Guide is being developed at the wiki page DCMI's Glossary and FAQ are also under revision. This section lists each element by its full name and label. For each element there are guidelines to assist in creating metadata content, whether it is done "from scratch" or by converting an existing record in another format. In the element descriptions below, a formal single-word label is specified to make the syntactic specification of elements simpler for encoding schemes. Although some environments, such as HTML, are not case-sensitive, it is recommended best practice always to adhere to the case conventions in the element names given below to avoid conflicts in the event that the metadata is subsequently converted to a case-sensitive environment, such as XML.

About DBpedia is a crowd-sourced community effort to extract structured information from Wikipedia and make this information available on the Web. DBpedia allows you to ask sophisticated queries against Wikipedia, and to link the different data sets on the Web to Wikipedia data. We hope that this work will make it easier for the huge amount of information in Wikipedia to be used in some new interesting ways.

Primer - Getting into the semantic web and RDF using N3 [translations into other languages ] The world of the semantic web, as based on RDF, is really simple at the base. This article shows you how to get started. Tools This page gives an overview of software tools related to the Semantic Web or to semantic technologies in general. Due to the large amount of tools being created in the community, this site is always somewhat outdated. Contributions and updates are welcomed.

How to publish Linked Data on the Web This document provides a tutorial on how to publish Linked Data on the Web. After a general overview of the concept of Linked Data, we describe several practical recipes for publishing information as Linked Data on the Web. This tutorial has been superseeded by the book Linked Data: Evolving the Web into a Global Data Space written by Tom Heath and Christian Bizer. SemanticWebTools - W3C Wiki REDIRECT New SemanticWiki Tools Page As of 12:50, 14 January 2010, this page is no longer maintained and should not be changed. The content has been transferred to (Changes made here after the above date may not be reflected on the new page!) Please consult and possibly modify that page. Table of Contents:

RDFa Primer We begin the introduction to RDFa by using a subset of all the possibilities called RDFa Lite 1.1 [rdfa-lite]. The goal, when defining that subset, was to define a set of possibilities that can be applied to most simple to moderate structured data markup tasks, without burdening the authors with additional complexities. Many Web authors will not need to use more than this minimal subset. 2.1.1 The First Steps: Adding Machine-Readable Hints to Web Pages

Tools - Visual Data Web More information on the DBpedia endpoint availability. Several tools have already been developed in the project that showcase the visual power of the Data Web. The following four tools are all implemented in the open source framework Adobe Flex. They are readily configured to access RDF data of the DBpedia and/or Linking Open Data (LOD) projects and only require a Flash Player to be executed (which is usually already installed in Web browsers). RDFa, Drupal and a Practical Semantic Web In the march toward creating the semantic web, web content management systems such as Drupal (news, site) and many proprietary vendors struggle with the goal of emitting structured information that other sites and tools can usefully consume. There's a balance to be struck between human and machine utility, not to mention simplicity of instrumentation. With RDFa (see W3C proposal), software and web developers have the specification they need to know how to structure data in order to lend meaning both to machines and to humans, all in a single file. And from what we've seen recently, the Drupal community is making the best of it.