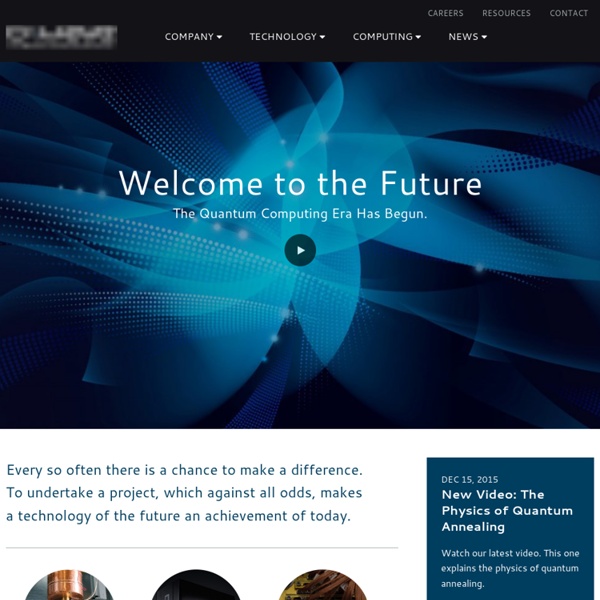 Data Analysts: What You'll Make and Where You'll Make It - Udacity - Be in Demand The Americas. The Wild West. Outer space. Big Data. Data is the new frontier of the 21st century, ripe for exploration. Data science—obtaining, analyzing, and reporting on data insights ranging from business metrics to user behavior—is an ultra-buzzy field right now.

Numerology Numerology is any belief in the divine, mystical or other special relationship between a number and some coinciding events. It has many systems and traditions and beliefs. Numerology and numerological divination by systems such as isopsephy were popular among early mathematicians, such as Pythagoras, but are no longer considered part of mathematics and are regarded as pseudomathematics or pseudoscience by modern scientists.[1][2][3] Today, numerology is often associated with the paranormal, alongside astrology and similar divinatory arts.[4]

Technology The same image data drives both RGB stripe and PenTile RGBW™ displays. However, conventional RGB stripe displays render (draw) images by assigning a color and luminance (brightness) to an entire RGB-triplet as a whole pixel, adjusting its three RGB subpixels to set a single addressable point. Images on a PenTile RGBW™ panel are subpixel rendered, meaning they are drawn at the subpixel level (the individual points of light), rather than to the whole pixels of an RGB stripe display.

The History of Programming Languages Infographic Posted by Neil DuPaul in INFOGRAPHICS, April 15, 2013 | In a world of increasing inter-connectivity, programming languages form the foundation. Did you know that the first programming language is over 100 years old and was written by a woman, Ada Lovelace? Join as us we delve into the history, evolution, and prevalance of programming languages over the years. In addition to outlining the history of languages and how each is traditionally used, you’ll find information on what type of vulnerabilities are most common in programs developed in each language and which flaws are most typically fixed once discovered. Small Version

Outcomes, Impacts, and Indicators The Impact Survey was first used in 2009 to help gather data for the Opportunity for All study reports, conducted by the University of Washington’s iSchool with assistance from the Bill & Melinda Gates Foundation. Libraries were enlisted to connect to a web survey, the results of which were used to augment responses gathered through a telephone-based poll. To our surprise and delight, we gathered more than 45,000 survey responses in just ten weeks, with about 400 libraries participating. Even more delightful was finding that libraries were using the data from Opportunity for All as well as the reports of Impact Survey results from their own ­communities. Now, six years and several versions later, the Impact Survey is still showing the value of public access technology in libraries, and more libraries than ever are taking advantage of having outcomes, impacts, and indicators ready to measure with just a little bit of copying and pasting. Demonstrating what we do

FRIDA Robot will Make your Gadget Meet FRIDA – a two handed concept robot for industrial assembly applications. This striking creation might be able to bridge the gap between fully manual assembly and fully automated manufacturing lines. The Frida project was started back in 2007 with a core team of Swiss researchers from ABB team that was then complemented by other teams from Sweden, Norway, Germany, the United States and China. The prototypes were manufactured and assembled in Sweden but many students from different universities around the world were also involved in different stages of the development. FRIDA was created in order to meet changing scenarios frequently encountered in the consumer electronics industry and other sectors. Top 50 Guides for New Web Developers For those just getting started in Web development, the options and information out there can seem overwhelming. While this may be so, it’s truly an asset to be able to have access to limitless choices. You will, however, need to choose a place to begin learning all the things you don’t know. Whether you have a basic knowledge of Web development or are a complete newbie, here are 50 guides that can help you to learn and expand your knowledge so that you can build more successful and accessible sites.

Philip K. Dick Personal life[edit] The family moved to the San Francisco Bay Area. When Philip turned five, his father was transferred to Reno, Nevada. Martian Rivers and Lakes Giant cracks that crisscross to form polygons have been imaged on the floors of hundreds of Martian impact craters by NASA’s Mars Reconnaissance Orbiter. Scientists have been aware of them for years, but assumed they resulted from the expansion and contraction of the craters’ floors due to temperature fluctuations. A closer look at the Martian crater polygons shows cracks on both large and small size scales. Biological Computer: Stanford Researchers Discover Genetic Transistors That Turn Cells Into Computers Researchers at Stanford University announced this week that they've created genetic receptors that can act as a sort of "biological computer," potentially revolutionizing how diseases are treated. In a paper published in the journal "Science" on Friday, the team described their system of genetic transistors, which can be inserted into living cells and turned on and off if certain conditions are met. The researchers hope these transistors could eventually be built into microscopic living computers. Said computers would be able to accomplish tasks like telling if a certain toxin is present inside a cell, seeing how many times a cancerous cell has divided or determining precisely how an administered drug interacts with each individual cell. Once the transistor determines the conditions are met, it could then be used to make the cell, and many other cells around it, do a specific thing--like telling cancerous cells to destroy themselves. The team demonstrated their work using E.

Masters of Networks 2: what we will do - Insite Masters of Networks is essentially a hackathon. There will be no talks except a very short introduction by me. While hackathons typically organize themselves given good wi-fi and enough caffeine, we thought we would give it a modicum of structure. It works like this: There will be two teams. Each is manned by at least one policy maker with a burning question; one network scientist; one developer who can hack around code on the fly; and – ideally, one statistician to secure whatever statistical analysis we might need to do. Tales of Future Past It wasn't that long ago that we had a future. I mean, we have one now; the world isn't going to crash into the Sun or anything like that. What I mean is that we had a future that we could clearly imagine. The future wasn't tomorrow, next week, next year, or next century. It was a place with a form, a structure, a style. True, we didn't know exactly what the future would be like, but we knew that it had to be one of a few alternatives; some good, some very bad.