MANOVA What is it? Factorial ANOVA (including two-way ANOVA) Assumptions of the Factorial ANOVA » Statistics Solutions. The factorial ANOVA has a several assumptions that need to be fulfilled – (1) interval data of the dependent variable, (2) normality, (3) homoscedasticity, and (4) no multicollinearity. 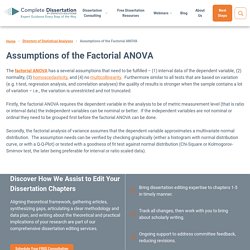 How to Interpret the Results of A Two Way ANOVA (Factorial) Introduction to ANOVA / MANOVA. A general introduction to ANOVA and a discussion of the general topics in the analysis of variance techniques, including repeated measures designs, ANCOVA, MANOVA, unbalanced and incomplete designs, contrast effects, post-hoc comparisons, assumptions, etc. 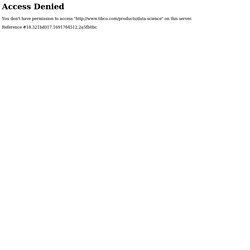 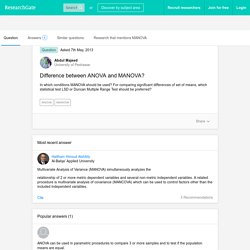 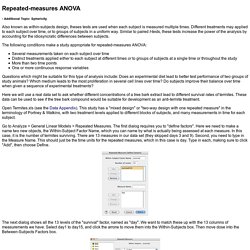 Different treatments may applied to each subject over time, or to groups of subjects in a uniform way. Similar to paired t-tests, these tests increase the power of the analysis by accounting for the idiosyncratic differences between subjects. The following conditions make a study appropriate for repeated-measures ANOVA: Several measurements taken on each subject over time Distinct treatments applied either to each subject at different times or to groups of subjects at a single time or throughout the study More than two time points One or more continuous response variables. Advanced ANOVA/MANOVA. What is MANOVA? 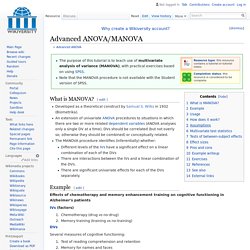 [edit] Developed as a theoretical construct by Samual S. Wilks in 1932 (Biometrika).An extension of univariate ANOVA procedures to situations in which there are two or more related dependent variables (ANOVA analyses only a single DV at a time). DVs should be correlated (but not overly so; otherwise they should be combined) or conceptually related.The MANOVA procedure identifies (inferentially) whether: Different levels of the IVs have a significant effect on a linear combination of each of the DVsThere are interactions between the IVs and a linear combination of the DVs.There are significant univariate effects for each of the DVs separately. 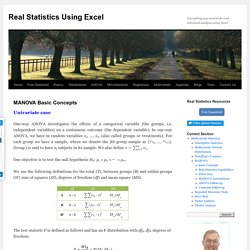 In one-way ANOVA, we have m random variables x1, …, xm (also called groups or treatments). For each group we have a sample, where we denote the jth group sample as { }. Group j is said to have nj subjects in its sample. Our objective is to test the null hypothesis H0: μ1 = μ2 = ⋯ = μm. MANOVA Assumptions. In order to use MANOVA the following assumptions must be met: Observations are randomly and independently sampled from the populationEach dependent variable has an interval measurementDependent variables are multivariate normally distributed within each group of the independent variables (which are categorical)The population covariance matrices of each group are equal (this is an extension of homogeneity of variances required for univariate ANOVA) These assumptions are similar to those for the Hotelling’s T-square test (see Hotelling’s T-square for Two samples). 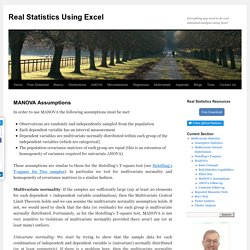 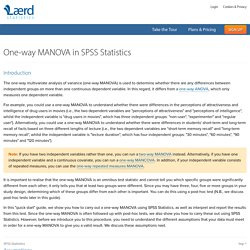 It is important to realise that the one-way MANOVA is an omnibus test statistic and cannot tell you which specific groups were significantly different from each other; it only tells you that at least two groups were different. Manova1. Free Download. Click on an icon below for a free download of either of the following files. 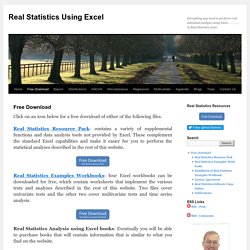 One file covers univariate tests and the other multivariate tests Real Statistics Analysis using Excel book: Shortly you will be able to purchase books that will contain information that is similar to what you find in the website. Statistically Significant Consulting. Click on the Audio Buttons to Hear a Summary of How I Work with Doctoral Candidates. 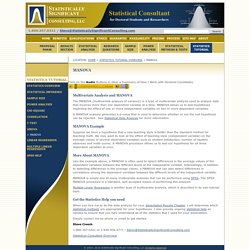 Sage: MANOVA. SPSS Data Analysis Examples: One-way Manova. SPSS Data Analysis Examples One-way Manova Version info: Code for this page was tested in IBM SPSS 20. MANOVA is used to model two or more dependent variables that are continuous with one or more categorical predictor variables. Please note: The purpose of this page is to show how to use various data analysis commands. It does not cover all aspects of the research process which researchers are expected to do. In particular, it does not cover data cleaning and checking, verification of assumptions, model diagnostics or potential follow-up analyses. What is Multivariate Statistical Analysis? Multivariate statistical analysis refers to multiple advanced techniques for examining relationships among multiple variables at the same time. Multivariate Analysis of Variance MANOVA: NCSS.