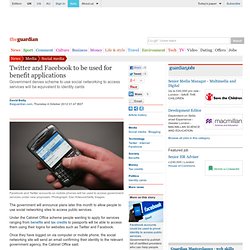 Photograph: Dan Kitwood/Getty Images The government will announce plans later this month to allow people to use social networking sites to access public services. Under the Cabinet Office scheme people wanting to apply for services ranging from benefits and tax credits to passports will be able to access them using their logins for websites such as Twitter and Facebook. Once they have logged on via computer or mobile phone, the social networking site will send an email confirming their identity to the relevant government agency, the Cabinet Office said.

The government has denied that the scheme is equivalent to an identity card, stressing that it is not compulsory and will be an alternative to existing methods of accessing public services. A Cabinet Office spokesman said the plans were part of the drive to digitise public services. 3 Easy "Dream Measurements" That Twitter Could Give Us. The Top 100 Twitter Tools of 2012 (Categorized) This post is #9 in DailyTekk’s famous Top 100 series which explores the best startups, gadgets, apps, websites and services in a given category. 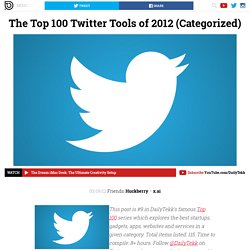 Total items listed: 115. Time to compile: 8+ hours. The Once Secret World of Buying Twitter Followers. If you missed Fast Company’s trending article on StatusPeople, a service that analyzes Twitter accounts to see who has bought their followers, you must live under a rock. 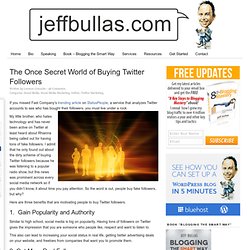 My little brother, who hates technology and has never been active on Twitter at least heard about Rhianna being called out for having tons of fake followers. I admit that he only found out about the dirty scheme of buying Twitter followers because he was listening to a popular radio show, but this news was prominent across every social media network so if you didn’t know, it about time you pay attention. So the word is out, people buy fake followers, but why? Here are three benefits that are motivating people to buy Twitter followers. 1. Similar to high school, social media is big on popularity. This also can lead to increasing your social status in real life, getting better advertising deals on your website, and freebies from companies that want you to promote them. 2. 3.

Twitter Inching Closer To Giving You All Your Tweets, But Search Has A Long Way To Go. Twitter is working on a project that will give users access to an archive of all of their own tweets. 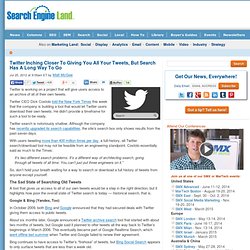 Twitter CEO Dick Costolo told the New York Times this week that the company is building a tool that would let Twitter users download their own tweets. He didn’t provide a timeframe for such a tool to be ready. Twitter search is notoriously shallow. Although the company has recently upgraded its search capabilities, the site’s search box only shows results from the past seven days. With users tweeting more than 400 million times per day, a full-history, all-Twitter search/download tool may not be feasible from an engineering standpoint.

It’s two different search problems. So, don’t hold your breath waiting for a way to search or download a full history of tweets from anyone except yourself. Twitter Cuts Off LinkedIn. As of June 29, users can no longer post updates to LinkedIn from popular microblogging site Twitter. 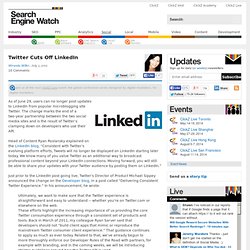 The change marks the end of a two-year partnership between the two social media sites and is the result of Twitter’s clamping down on developers who use their API. Head of Content Ryan Roslansky explained on the LinkedIn blog, “Consistent with Twitter’s evolving platform efforts, Tweets will no longer be displayed on LinkedIn starting later today. The Beginner's Guide to Twitter - How To Get Your Company Twitter Account Up And Running. 5 New Twitter Features to Enhance Your Experience. Have you kept up with the new Twitter changes? 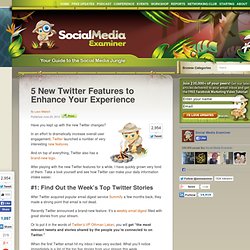 In an effort to dramatically increase overall user engagement, Twitter launched a number of very interesting new features. And on top of everything, Twitter also has a brand-new logo. After playing with the new Twitter features for a while, I have quickly grown very fond of them. Twitter Finally Ditches “50+”, New and Old Tweets Now Show Exact Counts Of Retweets and Favorites. Tweets past, present, and future now show their exact number of retweets and favorites instead of showing “50+” if they pass that count — a move that could promote vanity and competition on Twitter. 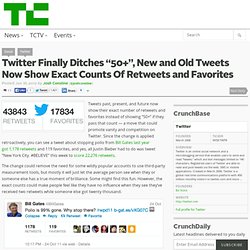 Since the change is applied retroactively, you can see a tweet about stopping polio from Bill Gates last year got 1,178 retweets and 119 favorites, and yes, all Justin Bieber had to do was tweet “New York City. #BELIEVE” this week to score 22,276 retweets. The change could remove the need for some wildly popular accounts to use third-party measurement tools, but mostly it will just let the average person see when they or someone else has a true moment of brilliance. Some might find this fun. However, the exact counts could make people feel like they have no influence when they see they’ve received two retweets while someone else got twenty thousand.