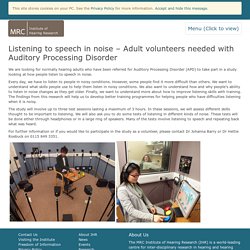 Every day, we have to listen to people in noisy conditions. However, some people find it more difficult than others. We want to understand what skills people use to help them listen in noisy conditions. We also want to understand how and why people’s ability to listen in noise changes as they get older. Finally, we want to understand more about how to improve listening skills with training. The study will involve up to three test sessions lasting a maximum of 3 hours. For further information or if you would like to participate in the study as a volunteer, please contact Dr Johanna Barry or Dr Hettie Roebuck on 0115 849 3351. 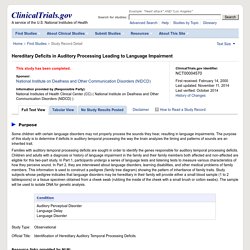 Comorbidity of Auditory Processing, Language, and Reading Disorders. Long-term outcome of oral language and phonological awareness intervention with socially disadvantaged preschoolers: the impact on language and literacy. THE BRAIN FROM TOP TO BOTTOM : MEMORY AND LEARNING. From a clinical and physiological standpoint, many observations suggest that there may be various sub-categories of long-term memory. 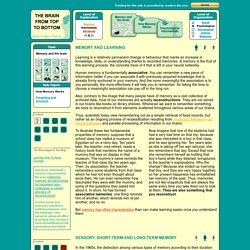 For example, certain kinds of amnesia affect certain kinds of memories, but not others. Similarly, researchers have found that various brain structures specialize in processing various kinds of memories. One of the most fundamental of these distinctions is between declarative and non-declarative memory, based on whether the memory’s content can be expressed verbally. Traditionally, most memory studies have focused on explicit memory, which involves the subjects' conscious recollection of things and facts. Visual Learning and the Brain: Implications for Dyslexia. Auditory Processing Disorder And Brain Pathology In A Preterm Child With Learning Disabilities.

Abstract: Background: Auditory processing disorders involve deficits in the processing of information in the auditory domain that are not due to higher order language, cognitive or other related factors. 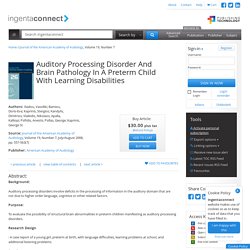 PLOS ONE: Molecular Mapping of Movement-Associated Areas in the Avian Brain: A Motor Theory for Vocal Learning Origin. Results In experiments that identified night vision brain areas in migratory songbirds [26], [27], we performed a series of control experiments that led to the identification of brain areas associated with movement behavior that we report here. 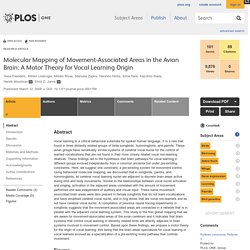 Unexpectedly, the areas of robust movement-associated activation were closest to the vocal nuclei, and thus we investigated this activation further in a non-migratory songbird, the zebra finch (Taeniopygia guttata), for which the vocal system has been studied in detail. Once we established these areas as movement-associated and adjacent to vocal nuclei in songbirds (Part I of this report), we next tested whether other vocal learning birds (Part II) and vocal non-learning birds (Part III) had similar properties to address implications on the evolution of vocal learning. 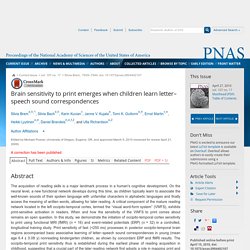 Improving the performance of the amblyopic visual system. Education and Services for People with Autism (ESPA) Research. A Policymakerâ€™s Primer on Education Research. {*style:<b>Written by PATRICIA A. 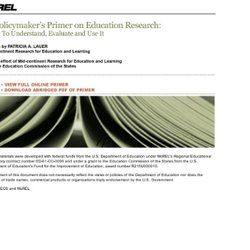 LAUER Mid-continent Research for Education and Learning </b>*} {*style:<b>A joint effort of Mid-continent Research for Education and Learning and the Education Commission of the States </b>*} These materials were developed with federal funds from the U.S. The content of this document does not necessarily reflect the views or policies of the Department of Education nor does the mention of trade names, commercial products or organizations imply endorsement by the U.S. Identifying specific language impairment in deaf children acquiring British Sign Language: Implications for theory and practice. 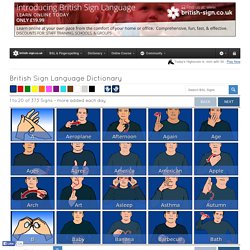 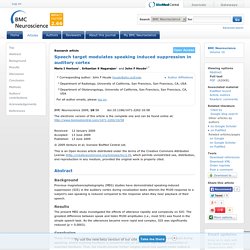 All participants gave their informed consent after procedures had been fully explained. Neuroscience: Systems-Level Brain Development. MIT Department of Linguistics: People: Faculty: Kenneth Wexler: Publications. "Some issues in the growth of control. 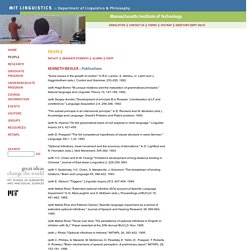 " In R.K. Larson, S. Iatridou, U. Lahiri and J. A cognitive and psycholinguistic investigation of neologisms. Bose, Arpita and Buchanan, Lori A cognitive and psycholinguistic investigation of neologisms. Aphasiology, 21(6-8), August, 2007, pages 726-738. Background: Jargon aphasia with neologisms (i.e., novel nonword utterances) is a challenging language disorder that lacks a definitive theoretical description as well as clear treatment recommendations (Marshall, 2006). Aim: The aims of this two-part investigation were to determine the source of neologisms in an individual (FF) with jargon aphasia, to identify potential facilitatory semantic and/or phonological cueing effects in picture naming, and to determine whether the timing of the cues relative to the target picture mediated the cueing advantage. Auditory frequency discrimination learning is affected by stimulus variability â€” Attention, Perception & Psychophysics.

Applied Behavior Analysis. Functional genetic analysis of mutations implicated in a human speech and language disorder. Abstract Mutations in the FOXP2 gene cause a severe communication disorder involving speech deficits (developmental verbal dyspraxia), accompanied by wide-ranging impairments in expressive and receptive language. The protein encoded by FOXP2 belongs to a divergent subgroup of forkhead-box transcription factors, with a distinctive DNA-binding domain and motifs that mediate hetero- and homodimerization. Here we report the first direct functional genetic investigation of missense and nonsense mutations in FOXP2 using human cell-lines, including a well-established neuronal model system.

We focused on three unusual FOXP2 coding variants, uniquely identified in cases of verbal dyspraxia, assessing expression, subcellular localization, DNA-binding and transactivation properties. Philosophy of science and the diagnostic process. + Author Affiliations ↵*Correspondence to Brian H Willis, Primary Care Clinical Sciences, University of Birmingham, Edgbaston, Birmingham B15 2TT, UK; E-mail: b.h.willis@bham.ac.uk This is an overview of the principles that underpin philosophy of science and how they may provide a framework for the diagnostic process. Although philosophy dates back to antiquity, it is only more recently that philosophers have begun to enunciate the scientific method. Since Aristotle formulated deduction, other modes of reasoning including induction, inference to best explanation, falsificationism, theory-laden observations and Bayesian inference have emerged.

RU kidding? Research finds that chatspeak has no impact on children's spelling ability. Parents, get ready to say OMG and watch your teens roflol. This will prolly comes as a bit of a shock to UR system, but findings from a group of University of Alberta researchers show that language commonly used in instant messaging has no effect on your child's spelling abilities. If anything, says study author Connie Varnhagen, using language variations commonly used in instant messaging and texting is actually a good sign. Researchers find how brain hears the sound of silence. Developmental Verbal Dyspraxia. Facial expressions show language barriers too. This release is available in Chinese. People from East Asia tend to have a tougher time than those from European countries telling the difference between a face that looks fearful versus surprised, disgusted versus angry, and now a new report published online on August 13th in Current Biology, a Cell Press publication, explains why. Rather than scanning evenly across a face as Westerners do, Easterners fixate their attention on the eyes.

A randomized controlled trial investigation of a non-stimulant in attention deficit hyperactivity disorder (ACTION): Rationale and design. 1. Study regimens Eligible and consenting participants will complete rating scales and a computer-based test battery to assess cognitive performance. Figure 1 shows the schema for the ACTION study, which is a randomized double-blind cross-over study. Information - Migraine Action. Migraine is the most common neurological condition; it affects people of all ages, social classes, races and cultures.

Dyslexia Action . Hertsdirect.org Community Action Dacorum (Headquarters) Teacher education as identity construction: insights from action research. ParaChat Live Chat Software - Since 1996. Living With Dyslexia. This book reinforces the need for understanding and support for children. Institute of Sound and Vibration Research. Dyslexia's Brain Changes May Occur Before Kids Learn to Read. MONDAY, Jan. 23, 2012 (HealthDay News) -- New imaging research shows that the reduced brain activity associated with the onset of dyslexia appears to develop before, not after, a child starts to read. Key parts of the brain's rear left hemisphere critical to language processing do not undergo activity changes as a consequence of dyslexia, the study suggests, but may instead be part of the cause. The finding could ultimately help clinicians screen for at-risk children at an early pre-reading age, when interventions to reduce the severity of the condition might be most effective.

Building evidence into our services is crucial to improving the education and children’s services we provide. DfES, Research Website. The Simple View of Reading: Changes over Time. Dyslexia Research Institute, Inc. Apprenticeships can change lives of over 50s, minister says - Telegraph. He said said: “Demand from employers for adult Apprenticeships is growing, because they help people of all ages – including the over 50s – to get and hold down skilled jobs. “As we recover from the great recession we need to build a recovery for all. Apprenticeships increasingly help people of all ages get the skills they need to get the new jobs becoming available. "Our priority is to build on the best of the Apprenticeships programme expanding Apprenticeships where they deliver the greatest benefits for employers, apprentices and the wider economy.

" New figures released by the government show that in the past year alone more than 34,000 people aged over 50 have started an apprenticeships, with more than a third of them finding jobs in business, administration and law. Changing concepts of dyslexia: nature, treatment and co-morbidity, November 2009.