ABC_NET_AU 22/03/17 Study finds possible link between pesticide exposure and farmer health. A study has found farmers' nervous systems might be impacted by exposure to the some of the most widely used pesticides. 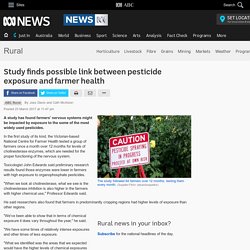 In the first study of its kind, the Victorian-based National Centre for Farmer Health tested a group of farmers once a month over 12 months for levels of cholinesterase enzymes, which are needed for the proper functioning of the nervous system. Toxicologist John Edwards said preliminary research results found those enzymes were lower in farmers with high exposure to organophosphate pesticides.

"When we look at cholinesterase, what we see is the cholinesterase inhibition is also higher in the farmers with higher chemical use," Professor Edwards said. Diméthoate en Australie. QLD_GOV_AU 11/04/17 Impacts of nutrient and pesticide run-off from cane farming. Print The Great Barrier Reef is Queensland’s most treasured ecosystem and is worth around $6 billion a year to the economy, supporting 69,000 jobs. 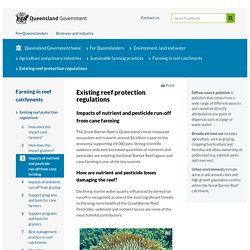 Strong scientific evidence indicates increased quantities of nutrients and pesticides are entering the Great Barrier Reef lagoon and cane farming is one of the key sources. How are nutrient and pesticide losses damaging the reef? Declining marine water quality, influenced by terrestrial runoff, is recognised as one of the most significant threats to the long-term health of the Great Barrier Reef. EPA_NSW_GOV_AU 09/10/17 Pesticides Act and Regulation. 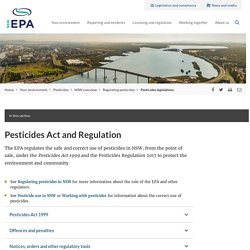 PIN penalties are much lower than prosecution penalties. The EPA uses PINs in matters where the essential facts of the offence are not in dispute. If you are issued with a PIN and pay the penalty within the set period, the matter is finished and no criminal conviction is recorded. If further evidence comes to light that indicates the PIN was wrongly issued, EPA can withdraw the PIN and your payment will be refunded. Paying the PIN is not regarded as an admission of liability if there is any civil litigation arising from the incident. CAWTHRON INSTITUTE - DEC 2015 - TRENDS IN VERTEBRATE PESTICIDE USE AND THE IMPORTANCE OF A RESEARCH PIPELINE FOR MAMMALIAN PEST CONTROL IN NEW ZEALAND. Cawthron Report 2754. 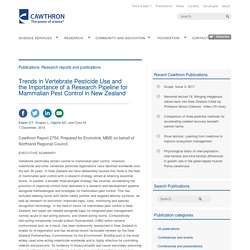 Prepared for Envirolink, MBIE on behalf of Northland Regional Council. Vertebrate pesticides remain central to mammalian pest control. However, rodenticide and other vertebrate pesticide registrations have declined worldwide over the last 30 years. MARLBOROUGH_govt_nz 06/05/15 National Survey of Pesticides in Groundwater 2014. Le site Australian Herbicide Resistance Initiative (AHRI) THE GUARDIAN 04/07/16 Pesticide blamed for huge drop in frog numbers along Queensland coast. The head of Australia’s only dedicated frog hospital believes powerful insecticides are behind a staggering decline in frog populations along the Queensland coast. 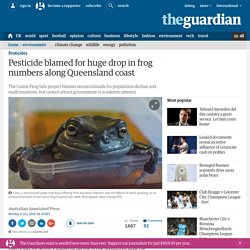 But Deborah Pergolotti, of the Cairns Frog Safe project, has struggled to drum up government and academic interest in researching the bizarre malformations she has documented in amphibians. “The first domino in the sequence is chemicals,” she says, specifically neonicotinoids. Introduced in Australia in 1996, neonicotinoids attack the nervous system of insects and have caused controversy overseas for their perceived link to declining bee populations. The European Union has restricted their use, but they are used widely in Australia. Pergolotti estimates there has been a 95% decline in the Cairns frog population since the hospital opened 17 years ago. “The usual comment is: ‘What proof do you have?’ But her attempts to alert authorities have fallen on deaf ears. 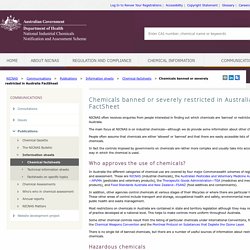 The main focus at NICNAS is on industrial chemicals—although we do provide some information about other chemicals. People often assume that chemicals are either 'allowed' or 'banned' and that there are easily accessible lists of banned chemicals. In fact the controls imposed by governments on chemicals are rather more complex and usually take into account the way in which the chemical is used. New Zealand Plant Protection 69: 296 - 304 (2016) Use of the sterile insect technique in New Zealand: Benefits and constraints. 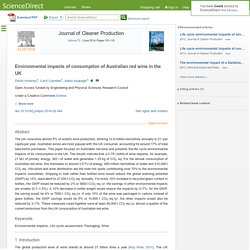 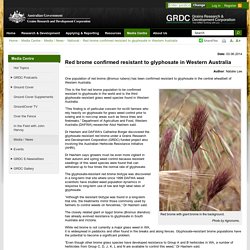 Red brome with giant brome in the background. Photo by Agronomo. This is the first red brome population to be confirmed resistant to glyphosate in the world and is the third glyphosate resistant grass weed species found in Western Australia. GRDC - winter 2013 - survey find glyphosate resistant ryegrass is widespread in cropping padocks in the South East of South Australia. RMIT Universit - NOV 2006 - The Effects of Pulse Exposure of Six Agricultural Chemicals (including four herbicides) on the Early Life Stages of Selected Native Fish from the Goulburn-Murray River Region, Victoria, Australia (research collaboration between. 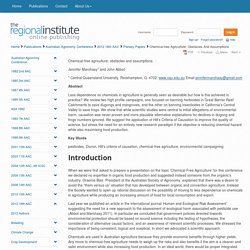 We review two high profile campaigns, one focused on banning herbicides in Great Barrier Reef Catchments to save dugongs and mangroves, and the other on banning insecticides in California’s Central Valley to save frogs. We show that while scientific studies were central to initial allegations of environmental harm, causation was never proven and more plausible alternative explanations for declines in dugong and frogs numbers ignored. Key Words pesticides, Diuron, Hill’s criteria of causation, chemical-free agriculture, environmental campaigning When we were first asked to prepare a presentation on the topic ‘Chemical Free Agriculture’ for this conference we declared no expertise in organic food production and suggested instead someone from the organic’s industry. 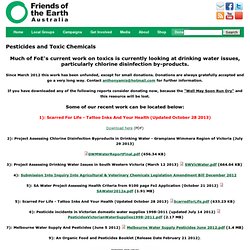 Since March 2012 this work has been unfunded, except for small donations. Donations are always gratefully accepted and go a very long way. Contact anthonyamis@hotmail.com for further information. If you have downloaded any of the following reports consider donating now, because the "Well May Soon Run Dry" and this resource will be lost. Sci Total Environ. 2013 Apr 1;449:208-13. Maternal exposure to organochlorine pesticides in Western Australia. AUSTRALIAN SOCIETY OF AGRONOMY - 2012 - Chemical-free agriculture: obstacles and assumptions. FOE - JUNE 2012 - Issues Regarding Melbourne Drinking Water & Pesticides. Chemosphere Volume 88, Issue 3, July 2012, Organochlorine pesticides in soil under irrigated cotton farming systems in Vertisols. Abstract Organochlorine pesticides (OCPs) such as DDT and DDE have been detected in the surface 0.2 m of Vertisols in the lower Namoi Valley of north western New South Wales, Australia even though they have not been applied to crops since 1982.

However, their presence in the deeper soil horizons has not been investigated. The objective of this study was to determine if OCPs were present to a depth of 1.2 m in Vertisols under irrigated cotton farming systems in the lower Namoi Valley of New South Wales. Soil was sampled from the 0–1.2 m depths in three sites, viz. the Australian Cotton Research Institute, ACRI, near Narrabri (149°36′E, 30°12′S), and two cotton farms near Wee Waa (149°27′E, 30°13′S) and Merah North (149°18′E, 30°12′S) in northern New South Wales, Australia. The OCPs detected and their metabolites were α-endosulfan, β-endosulfan, endosulfan sulphate, DDD, DDE, DDT and endrin. FRIENDS OF THE EARTH AUSTRALIA – FEV 2012 - Pesticides, food and you - The dose makes the poison? Gestion du risque en résistance aux pesticides en Australie et N. Pesticides et pêche en Australie. Lutte intégrée en Australie. Organismes nuisibles des cultures en AUSTRALIE.

At the time that the MRLs are set, the APVMA undertakes a dietary exposure evaluation to ensure that the levels do not pose an undue hazard to human health. Download the Chemicals and food safety fact sheet (PDF, 699kb) | (RTF, 1.46Mb) The MRL Standard lists MRLs of substances which may arise from the approved use of those substances or other substances, and provides the relevant residue definitions to which these MRLs apply. The MRL Standard is a legislative instrument and can be found on the comlaw website (external site). Those tables are: Horticulture and Food Research Institute of New Zealand - 2011 - DEVELOPMENT OF GOOD AGRICULTURAL PRACTICE PROGRAMS IN NEW ZEALA. INTECH - DEC 2010 - Environmental Risks of Fungicides Used in Horticultural Production Systems. NSW Department of Primary Industries - AOUT 2008 - An Evaluation of the Economic, Environmental and Social Impacts of NSW DPI In. PUBLIC HEALTH ASSOCIATION AUSTRALIA 27/03/12 Response to the Australian Pesticides and Veterinary Medicines Authority (APVMA) Co.