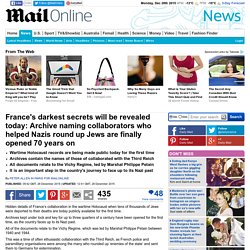 Archives kept under lock and key for up to three quarters of a century have been opened for the first time, as the country faces up to its Nazi past. All of the documents relate to the Vichy Regime, which was led by Marshal Philippe Petain between 1940 and 1944. This was a time of often ethusiastic collaboration with the Third Reich, as French police and paramilitary organisations were among the many who rounded up ‘enemies of the state’ and sent them to Germany for extermination. Scroll down for video Shame: A French prostitute has her head shaved as a public humiliation after having sexual relations with Germans. Many of the 76,000 Jews killed came from major cities including Paris, where an occupying German garrison worked closely with their French allies.

#neuschwanstein   #castle   #bavaria   #germany   by Stefan Hefele. Documentary - Space Shuttle Challenger Disaster - HD. We do like what we see! Thanks for the meme, Robin! Make your own to share. #20. Child labors working in a factory in 1909 in Macon, Georgia. - 28 Rare Historical Photos That Will Make You Look Twice. #13. A Japanese nurse in 1905. - 28 Rare Historical Photos That Will Make You Look Twice. Germany could send troops into streets for first time since war. “If we had a situation like Paris, perhaps with attacks in three of four places, we’d have to think about whether our police capabilities are enough,” Mr Schäuble told the Rheinische Post newspaper. 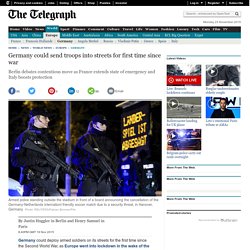 “What can we do to support security forces that are already overwhelmed on some normal weekends in the face of great challenges?” The minister’s comments have reopened the debate over the military’s role in modern Germany, where much of the public remains deeply sensitive to the idea of soldiers on the streets. Police outside the HDI-Arena stadium in Hanover, Germany. The match between Germany and Holland was called off at short notice due to security concerns and the stadium was evacuated.

Photo: EPA/CHRISTIAN CHARISIUS Under the constitution, the armed forces can be deployed in a crisis, but until now they have only been used to help with relief after natural disasters. Canada's Crown Royal Has Just Claimed The Title Of Best Whisky In The World. A full conversation of terrible (as in, awesome) animal puns. Beirut, Also the Site of Deadly Attacks, Feels Forgotten. Photo BEIRUT, Lebanon — Ali Awad, 14, was chopping vegetables when the first bomb struck. 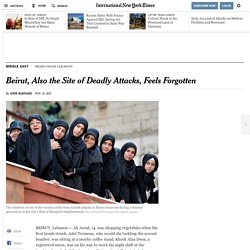 Adel Tormous, who would die tackling the second bomber, was sitting at a nearby coffee stand. Khodr Alaa Deen, a registered nurse, was on his way to work his night shift at the teaching hospital of the American University at Beirut, in Lebanon. All three lost their lives in a double suicide attack in Beirut on Thursday, along with 40 others, and much like the scores who died a day later in Paris, they were killed at random, in a bustling urban area, while going about their normal evening business. Paris Shootings and Explosions Leave Multiple Dead. A horrific outbreak of violence tore through Paris on Friday night, leaving more than 100 dead from shooting rampages and explosions. 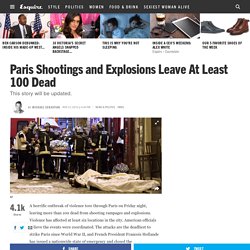 Violence has affected at least six locations in the city. American officials believe the events were coordinated. The attacks are the deadliest to strike Paris since World War II, and French President Francois Hollande has issued a nationwide state of emergency and closed the country's borders. Advertisement - Continue Reading Below The prosecutor's office in Paris said eight attackers are dead, seven the result of suicide bombings. Miami-Dade jury hears Facebook killer’s own words. Jurors on Friday heard for themselves exactly why Derek Medina, after shooting his unarmed wife eight times during an argument in their South Miami kitchen, uploaded a photo of her contorted, bloodied body on Facebook. 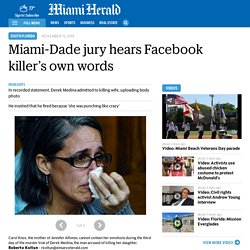 “So the family would know and be notified,” Medina said in a video-recorded statement played for the jury. Medina’s account of the killing of Jennifer Alfonso highlighted the third day of testimony in the high-profile murder trial. The 33-year-old condo security supervisor made national news in August 2013 when he shot and killed Alfonso, posting the image to her Facebook page and his own before surrendering to police. #princenikolaosofgreece #princesstatiana #princesofgreece #princessofgreece. Stunning! (Credit: Buzzfeed/Equine Photography) Fujian, China. #china. Waterbending Squirrel. It's okay to be different.