Cookies are Not Accepted - New York Times. Log In - New York Times. Avoid Media Manipulation – Reliable Research: Next Vista for Learning. Edutopia. When presented with new material, standards, and complicated topics, we need to be focused and calm as we approach our assignments. 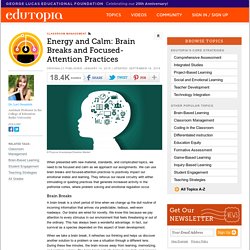 We can use brain breaks and focused-attention practices to positively impact our emotional states and learning. They refocus our neural circuitry with either stimulating or quieting practices that generate increased activity in the prefrontal cortex, where problem solving and emotional regulation occur. Brain Breaks A brain break is a short period of time when we change up the dull routine of incoming information that arrives via predictable, tedious, well-worn roadways.

Our brains are wired for novelty. When we take a brain break, it refreshes our thinking and helps us discover another solution to a problem or see a situation through a different lens. 1. I always carry a bag of household objects containing markers, scrap paper, and anything that one would find in a junk drawer -- for example, a can opener or a pair of shoelaces. 2. 3. 4. 5. 6. 7. 8. 9. 1. Edutopia. Considering how ubiquitous smartphones and tablets have become, especially in high school and middle school, questions about managing use and educating students about digital etiquette are on a lot of educators' minds. 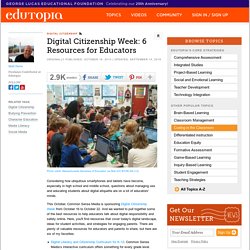 This October, Common Sense Media is sponsoring Digital Citizenship Week from October 16 to October 22. And we wanted to pull together some of the best resources to help educators talk about digital responsibility and safety online. Google Docs - create and edit documents online, for free. Keeping an eye on screen time. First there was too much TV, then computer and video-gaming addictions. 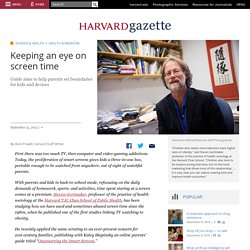 Today, the proliferation of smart screens gives kids a three-in-one box, portable enough to be watched from anywhere, out of sight of watchful parents. With parents and kids in back-to-school mode, refocusing on the daily demands of homework, sports, and activities, time spent staring at a screen comes at a premium. Steven Gortmaker, professor of the practice of health sociology at the Harvard T.H. Chan School of Public Health, has been studying how we have used and sometimes abused screen time since the 1980s, when he published one of the first studies linking TV watching to obesity. He recently applied the same scrutiny to an ever-present concern for 21st-century families, publishing with Kaley Skapinsky an online parents’ guide titled “Outsmarting the Smart Screens.” GAZETTE: What are the potential negative effects of too much screen time? GORTMAKER: We’ve been studying this issue for a long time. Weighed down. Screen time and children — How to guide your child. 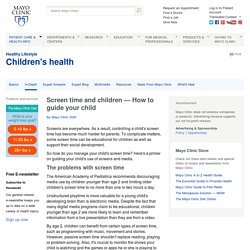 As a result, controlling a child's screen time has become much harder for parents. To complicate matters, some screen time can be educational for children as well as support their social development. So how do you manage your child's screen time? Here's a primer on guiding your child's use of screens and media. The problems with screen time The American Academy of Pediatrics recommends discouraging media use by children younger than age 2 and limiting older children's screen time to no more than one or two hours a day. Unstructured playtime is more valuable for a young child's developing brain than is electronic media. 5 Things Too Much Screen Time Does To Your Body.

When I was a kid, the only warning we had been given about technology and our health focused on televisions: "too much TV will make your eyes go square. 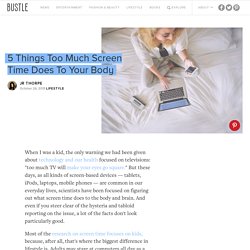 " But these days, as all kinds of screen-based devices — tablets, iPods, laptops, mobile phones — are common in our everyday lives, scientists have been focused on figuring out what screen time does to the body and brain. And even if you steer clear of the hysteria and tabloid reporting on the issue, a lot of the facts don't look particularly good. Kids And Screen Time: What Does The Research Say? : NPR Ed. Kids are spending more time than ever in front of screens, and it may be inhibiting their ability to recognize emotions, according to new research out of the University of California, Los Angeles. 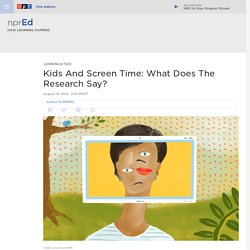 The study, published in the journal Computers in Human Behavior, found that sixth-graders who went five days without exposure to technology were significantly better at reading human emotions than kids who had regular access to phones, televisions and computers. The UCLA researchers studied two groups of sixth-graders from a Southern California public school. One group was sent to the Pali Institute, an outdoor education camp in Running Springs, Calif., where the kids had no access to electronic devices. For the other group, it was life as usual. At the beginning and end of the five-day study period, both groups of kids were shown images of nearly 50 faces and asked to identify the feelings being modeled.

A Wake-Up Call For Educators There's a big takeaway for schools, Greenfield says. 6 Negative Effects of Too Much Screen Time for Kids. By Jeffrey Green Have you considered sending your child to rehab to help them overcome their addiction to the electronic screens of video games, cell phones and the like? 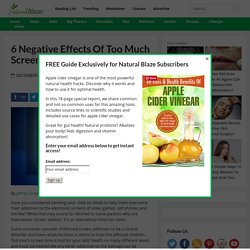 While that may sound far-fetched to some parents who are themselves ‘screen addicts’, it’s an idea whose time has come. Some countries consider childhood screen addiction to be a clinical disorder and have rehab facilities in which to treat the afflicted children. Too much screen time is bad for your kids’ health on many different levels and must be treated like any other addiction so the damage can be stopped, and hopefully reversed. Sleep Deprivation Without question the electronic screens of many devices are causing a crisis of sleep deprivation for all age groups.

Gray Matters: Too Much Screen Time Damages the Brain.