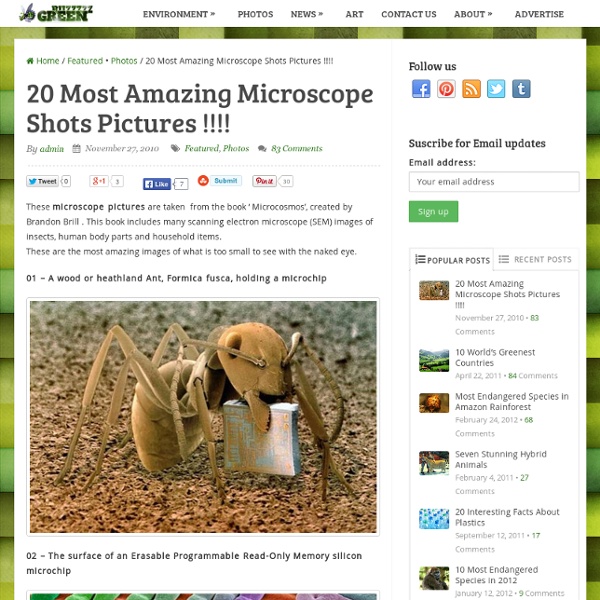 These microscope pictures are taken from the book ‘ Microcosmos’, created by Brandon Brill . This book includes many scanning electron microscope (SEM) images of insects, human body parts and household items. These are the most amazing images of what is too small to see with the naked eye. 01 – A wood or heathland Ant, Formica fusca, holding a microchip 02 – The surface of an Erasable Programmable Read-Only Memory silicon microchip 03 – Eyelash hairs growing from the surface of human skin 04 – The surface of a strawberry 05 – Bacteria on the surface of a human tongue 06 – Human sperm (spermatozoa), the male sex cells 07 – The nylon hooks and loops of velcro 08 – Household dust which includes long hairs such as cat fur, twisted synthetic and woolen fibers, serrated insect scales, a pollen grain, plant and insect remains 09 -The weave of a nylon stocking 10 – The end of the tongue (proboscis) of a hummingbird hawkmoth 11 – The head of a mosquito 12 – A human head louse clinging to a hair

Macro Photography Inspiration by Bill Jones 34inShare I love the amazing details you can find in these shots. Canister lets you add water (or bodily fluids) to recharge batteries SiGNa Chemistry Inc. is launching a hydrogen-producing cartridge, the mobile-H2™, that will work with a portable, pocket-sized fuel cell charger to provide instant power for cell phones and other mobile devices. You simply add water to the cartridge, and the device will charge depleted batteries on the go. For further convenience, any water will do (even waste water). Unlike solar battery chargers, you don’t need to worry about getting enough sunlight. According to its press materials, these cartridges provide a steady level of power from beginning to end. This sounds a bit like magic, but it actually involves some well-known chemistry.

Cool Stuff Science comes up with a lot of awesome stuff, and you don't need a Ph.D, a secret lab, or government funding to get your hands on some of the coolest discoveries. We've got a list of 11 mostly affordable gifts that are guaranteed to blow your mind, whether or not you're a science geek. Click on any image to see it enlarged. 1. Aerogel Also known as frozen smoke, Aerogel is the world's lowest density solid, clocking in at 96% air. Microscopic Images of Alcoholic Drinks All of these impressive photos of alcoholic beverages under a microscope uncover the elements that make up some of our preferred tipples. Similar to photos of snowflakes, each and every beverage is unique, while observed below when zoomed about 1, 000 times under a high tech lab microscope. Created by United States company Bevshots, these are available as artworks for potential buyers which recognize the concealed beauty of alcoholic beverages. Catching the small elements that define most popular drinks such as vodka, pina colada and Chablis.

Google to Sell Heads-Up Display Glasses by Year's End Screenshot via GoogleThe Google glasses will use augmented reality software to return real-time information about locations and people. People who constantly reach into a pocket to check a smartphone for bits of information will soon have another option: a pair of Google-made glasses that will be able to stream information to the wearer’s eyeballs in real time. According to several Google employees familiar with the project who asked not to be named, the glasses will go on sale to the public by the end of the year. The end of the net as we know it Posted on 21 Jan 2011 at 13:34 ISPs are threatening to cripple websites that don't pay them first. Barry Collins fears a disastrous end to net neutrality

Spanish Castle Stare at the dot for 30 seconds. Then, without moving your eyes, move the mouse over the image. The image will look like it's in color until you move your eyes. Note: JavaScript must be on for this illusion to work! Check your browser settings. College Electronic Microscope Facility Skip to main content Dartmouth College Electron Microscope Facility E.M. Facility Home Here is a map showing where we can be found. AQUA TEK S – the first waterproof, ruggedized, solar-powered battery case for iPhone The AQUA TEK S case offers ruggedized protection and a solar panel for charging its own built-in battery Image Gallery (5 images) If you're hoping to attract investors to get yet another iPhone case to an already crowded market, it had better do more than just protect a phone from bumps and scrapes. Snow Lizard Products is giving itself the best possible chance of raising funds for its new AQUA TEK S case for iPhone 4 and 4S with an offering that not only boasts ruggedized protection, but also includes a solar panel, built in battery, and is waterproof up to 20 ft (6 m). View all

40 technologies to watch in 2011 If the popular misreading of Mayan mythology is correct, we have fewer than two more years left on this Earth. That leaves precious little time for the tech industry to develop and perfect of all the cool technologies that sci-fi authors have dreamed up over the years. Still, while a December 2012 apocalypse may spell doom for the commercial viability of hovercars, it doesn't mean that the next couple of years in tech will be dull — quite the contrary. 2011 is already shaping up to be a banner year for tech and web innovation. Below is a list of over 40 websites, apps, companies, gadgets and technologies that the editors of Mashable think that you should keep an eye on over the coming year. None of them let you zoom through the air over traffic, but they're definitely all worth a look.

5 Tricks Eventually technological advancement comes to every profession even if that profession is just burn-out, hippy, or full-time junkie. Its been a long time coming, but apparently science has finally gotten the message and realized that even drug abuse can be made better, faster, and stronger. With that in mind, here are some new, readily available drugs that seem more like science fiction than pharmaceutical fact. Peering into the micro world - The Big Picture A team of University of Michigan researchers has recently created a set of electron microscope images of carbon nanotube structures depicting images of U.S. President-elect Barack Obama. John Hart, leader of the research team says it wasn't a political statement, but an attempt to draw attention to what is possible these days with nanotechnology, and imaging at the very small scale. I'll take him up on this invitation and share with you some other images of very tiny things in our world.