American Jobs Act. Not to be confused with the JOBS Act of 2012. 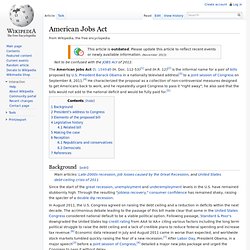 Background[edit] Since the start of the great recession, unemployment and underemployment levels in the U.S. have remained stubbornly high. Through the resulting "jobless recovery," consumer confidence has remained shaky, raising the specter of a double dip recession. In August 2011, the U.S. Congress agreed on raising the debt ceiling and a reduction in deficits within the next decade.

President's address to Congress[edit] Obama's speech aired in the United States on 11 television networks during primetime, including ABC, CBS, NBC, CNN, Fox News Channel, Fox Business Network, MSNBC, and CNBC. The Republicans declined to broadcast an official opposition response, as it is traditionally done after a presidential address to a joint session of Congress. Elements of the proposed bill[edit] The White House provided a fact sheet which summarizes the key provisions of the $447 billion bill.[15] Some of its elements include: Legislative history[edit] 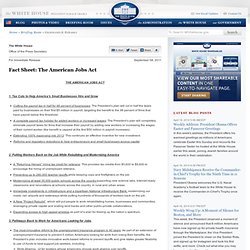 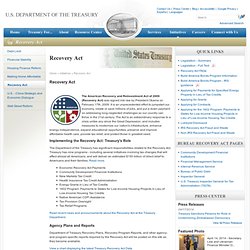 It is an unprecedented effort to jumpstart our economy, create or save millions of jobs, and put a down payment on addressing long-neglected challenges so our country can thrive in the 21st century. The Act is an extraordinary response to a crisis unlike any since the Great Depression, and includes measures to modernize our nation's infrastructure, enhance energy independence, expand educational opportunities, preserve and improve affordable health care, provide tax relief, and protect those in greatest need.

Implementing the Recovery Act: Treasury's Role The Department of the Treasury has significant responsibilities related to the Recovery Act. Agency Plans and Reports Department of Treasury Recovery Plans, Recovery Program Reports, and other agency- and program-specific reports required by the Recovery Act will be posted on this site as they become available. Stimulus.org. Publications. Neoclassical economic theory. Origins of Neoclassical Economic Theory In textbooks on economics, the creators of neoclassical economics (Stanley Jevons, Leon Walras, Francis Ysidro Edgeworth, and Vilfredo Pareto) are credited with transforming the study of economics into a rigorously mathematical scientific discipline. 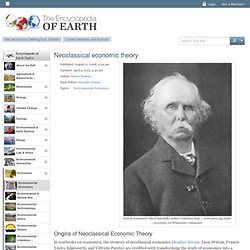 There are, however, no mentions in these textbooks, or in all but a few books on the history of economic thought, of a rather salient fact. The progenitors of neoclassical economics, all of whom were trained as engineers, developed their theories by substituting economic constructs derived from classical economics for physical variables in the equations of mid-nineteenth century theory in physics. The physics that the creators of neoclassical economics used as the template for their theories was developed from the 1840s to the 1860s. Hermann von Helmholtz. Circular flow in closed market system. Keynesian economics. The theories forming the basis of Keynesian economics were first presented by the British economist John Maynard Keynes in his book, The General Theory of Employment, Interest and Money, published in 1936, during the Great Depression. 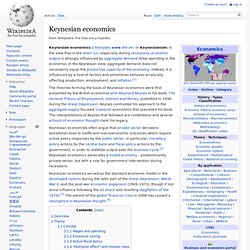 Keynes contrasted his approach to the aggregate supply-focused 'classical' economics that preceded his book. The interpretations of Keynes that followed are contentious and several schools of economic thought claim his legacy. Keynesian economists often argue that private sector decisions sometimes lead to inefficient macroeconomic outcomes which require active policy responses by the public sector, in particular, monetary policy actions by the central bank and fiscal policy actions by the government, in order to stabilize output over the business cycle.[2] Keynesian economics advocates a mixed economy – predominantly private sector, but with a role for government intervention during recessions.

Overview[edit] Theory[edit] Keynesian Economics. Keynesian economics is a theory of total spending in the economy (called aggregate demand) and its effects on output and inflation. 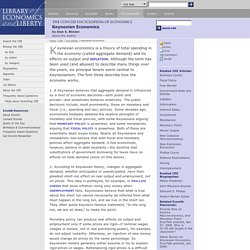 Although the term has been used (and abused) to describe many things over the years, six principal tenets seem central to Keynesianism. The first three describe how the economy works. 1. A Keynesian believes that aggregate demand is influenced by a host of economic decisions—both public and private—and sometimes behaves erratically. The public decisions include, most prominently, those on monetary and fiscal (i.e., spending and tax) policies. 2. Monetary policy can produce real effects on output and employment only if some prices are rigid—if nominal wages (wages in dollars, not in real purchasing power), for example, do not adjust instantly. But Keynesians believe that, because prices are somewhat rigid, fluctuations in any component of spending—consumption, investment, or government expenditures—cause output to fluctuate. 3. 4.