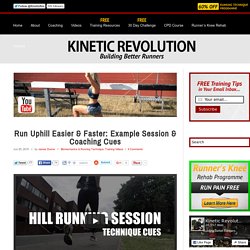 It helps athletes build strength-endurance and speed brilliantly. However, as with everything, your results depend specifically on your execution. If you perform hill reps with great form, the hills themselves will help you develop strength through range of motion in your glutes and hamstrings more than running the same pace on the flat. Conversely, if you heave your way up hill with poor form, this is one of the fastest ways to exacerbate muscular imbalances and place more strain on the knees and low back, to name just two areas.

Check out the coaching cues in the video above, and try example session described… Let me know how you get on About The Author James Dunne. Warm Up for Running - Dynamic Stretches & Drills. Running: It's All in The Hips. While so many runners, coaches, and others in the running industry are quick to point directly at the foot as the primary source of all problems and injuries. 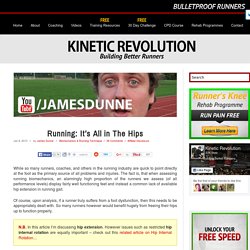 The fact is, that when assessing running biomechanics, an alarmingly high proportion of the runners we assess (of all performance levels) display fairly well functioning feet and instead a common lack of available hip extension in running gait. Of course, upon analysis, if a runner truly suffers from a foot dysfunction, then this needs to be appropriately dealt with. So many runners however would benefit hugely from freeing their hips up to function properly. N.B. In this article I’m discussing hip extension. Why Is Hip Extension Important For Runners? The propulsive motions in running gait come together to create an overall extension pattern. As we run, from the moment our standing foot begins to pass under our body, the overall goal is to create optimal forward propulsion (and some upwards displacement).

Kneeling Hip Flexor Stretch. Big Toe Extension and Running Mechanics. Kenyan Running Drills in Slow Motion: Warm-Up Routine. I was going through some of our archived video footage last night when I came across this slow motion footage recorded by Neil Scholes during his time with the Kenyan Olympic Team ahead of the London 2012 Olympics. 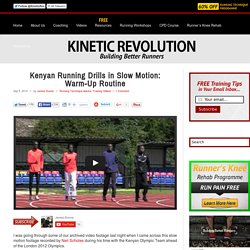 Neil recorded a number of their simple warm-up drills ahead of a track session. What I really like about this video is that it brilliantly demonstrates the combination of a few key factors we look to look to develop in the vast majority of the athletes we work with. In particular: More on Neil’s time with the Kenyan Olympic Team in these articles: About The Author James Dunne James has an academic background in Sport Rehabilitation and a special interest in Applied Biomechanics. Simple is Good! Easily Applied Running Technique Cue. It’s the job of a coach to possess a deep understanding of what we’re specifically trying to achieve with any given drill, cue and exercise. 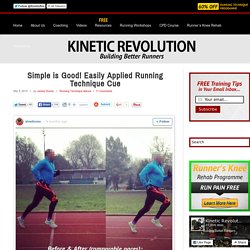 We have to appreciate the various mechanisms at work to reach the desired outcome. That said, where I feel many of us fail sometimes (myself included) is in then condensing this complexity down to a succinct set of words which resonate with the athletes we’re working with. I have to constantly tell myself: Simplify! Don’t over complicate things! As simple running cues which provide profound effects go, I love the example above… About The Author James Dunne James has an academic background in Sport Rehabilitation and a special interest in Applied Biomechanics.

Running Technique: Top 6 Ways To Improve Running Efficiency. We All Run Differently… With all the debate over the last few years around running techniques, it’s important to understand that there is a distinct lack of concrete scientific evidence supporting one method over any other. 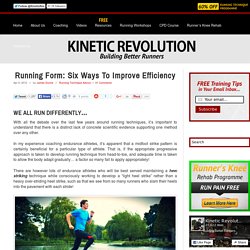 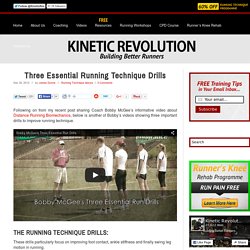 These drills particularly focus on improving foot contact, ankle stiffness and finally swing leg motion in running. 1) Ankling A great drill to work on foot landing technique, encouraging the development of a midfoot strike. The key is to allow the foot to quickly land on the midfoot, then allow the foot to flatten to the ground, loading the calf and achilles properly. Heel striking runners will often find this running technique drill tough at first. 2) Ankle Springs This drill specifically helps runners to develop the desired ankle stiffness that allows the elastic storage and return of energy. 3) High Knees. Running 101: Basic Speed Workouts For Runners. You don’t have to run fast in training—unless you want to run faster in races. 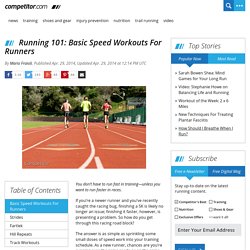 If you’re a newer runner and you’ve recently caught the racing bug, finishing a 5K is likely no longer an issue; finishing it faster, however, is presenting a problem. So how do you get through this racing road block? The answer is as simple as sprinkling some small doses of speed work into your training schedule. As a new runner, chances are you’re running over the same roads or on the same treadmill at the same speed every day. You’re using the same muscles in the same manner every time you lace up your sneaks. The Five Most Common Running Form Mistakes. By Brandon Laan, Published Jun. 12, 2013, Updated Jun. 14, 2013 at 7:58 AM UTC Are you making one of the following running form mistakes? 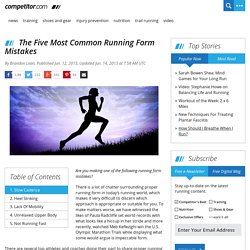 There is a lot of chatter surrounding proper running form in today’s running world, which makes it very difficult to discern which approach is appropriate or suitable for you. To make matters worse, we have witnessed the likes of Paula Radcliffe set world records with what looks like a hiccup in her stride and more recently, watched Meb Keflezighi win the U.S.

Olympic Marathon Trials while displaying what some would argue is impeccable form. Develop Proper Sprint Mechanics to Run Faster! How to Have Proper Foot Strike.