Earth from Above a collection of aerial photography... - justpaste.it 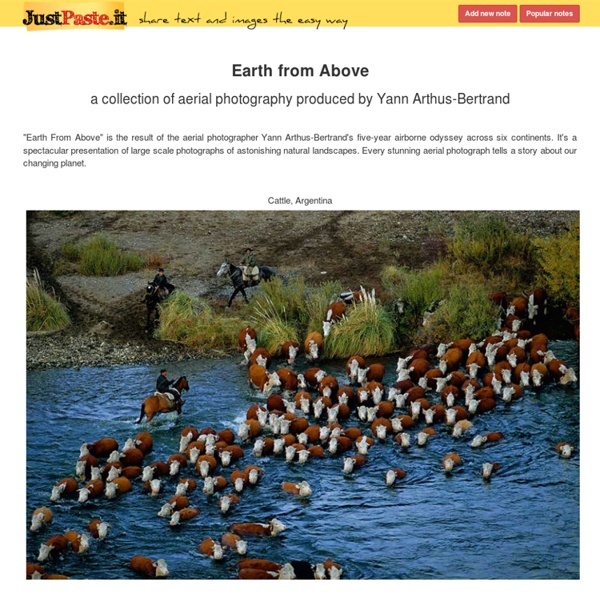 A Helpful Collection of Digital Post Processing Tutorials Resources by Bill Jones 26inShare Amazingly Creative Drawing Vs Photography This wonderful work has done by a very talented Belgian painter, illustrator, portraitist, caricaturist and photographer Ben Heine. This creative artist was born in Abidjan, Ivory Coast. He Studied graphic arts and sculpture and I also have a degree in journalism. 20 Cool Pictures of Earth from Space 20 cool pictures of Earth from Space thanks to National Geographic and a collection of amazing photographers. Bombetoka BayPhotograph courtesy Terra/ASTER/NASA and NASA Earth Observatory Sapphire waters tinged with pink sediment seem to get tangled amid emerald vegetation in a satellite picture of Bombetoka Bay, on the northwestern coast of Madagascar. To celebrate Earth Day—which today received the ultimate Internet accolade, a Google Doodle—National Geographic photo editors selected 20 of the most stunning pictures of Earth, as seen from space, including this jewel-toned shot of the island country off the African coast.

Who says birds don't have feelings? Here his wife is injured and the condition is fatal. She was hit by a car as she swooped low across the road. Here he brought her food and attended to her with love and compassion. He brought her food again but was shocked to find her dead. He tried to move her....a rarely-seen effort for swallows! BACK TO THE FUTURE : Irina Werning - Photographer I love old photos. I admit being a nosey photographer. As soon as I step into someone else’s house, I start sniffing for them. Most of us are fascinated by their retro look but to me, it’s imagining how people would feel and look like if they were to reenact them today… Two years ago, I decided to actually do this. So, with my camera, I started inviting people to go back to their future.. Now its time for KOREA, TAIWAN AND TOKYO.

88 Brilliant Examples of Forced Perspective Photography Forced perspective is a technique that employs optical illusion to make an object appear farther away, closer, larger or smaller than it actually is. It is used primarily in photography, filmmaking and architecture. It manipulates human visual perception through the use of scaled objects and the correlation between them and the vantage point of the spectator or camera. Mount Everest-Monte Everest -360 panorama view from summit - Climbing Mt... It is from a book titled Everest: Reflections From the Top by Christine Gee & Garry Weare

50 Images from National Geographic`s 2010 Photo Contest Writen by Bogdan / Comments Off on 50 Images from National Geographic`s 2010 Photo Contest This is one of the most anticipated annual photo contests. The deadline for the submissions is on November 30th so if you have an interesting photo, submit it. Below you can see 50 images collected from different categories. An Indian wrestler smears mud on his head before starting wrestling in Kolkata, India, March 30, 2010. Levitation Photography: 65 Stunning Examples & Tutorials Many says floating in the air, or so called levitation is impossible. Well, in fact everything is possible, all you need to do is believe yourself, seriously, believe that you can achieve it! And uh, believe that the Photoshop can help you achieve it. Okay, I’m talking about achieving levitation with the help of cheat tool like Photoshop. (Image Source: Dejon) Levitation is said to be some sort of skill that allows human to float in the air and yes, nobody did that successfully until now.

Split Family Faces Cousins: Justine, 29, & Ulric, 29 How much do you and your family members really look alike? Quebec, Canada-based graphic designer and photographer Ulric Collette has created a shockingly cool project where he's exploring the genetic similarities between different members of the same family. By splitting their faces in half and then splicing them together, he creates interesting new people that are sometimes quite normal looking and other times far from it. He calls this series Genetic Portraits. (Did you notice that Ulric, the photographer, is one-half of some of these pairings? Canon vs Nikon: a Financial and Consumer Comparison [INFOGRAPHIC] A Post By: Darren Rowse There’s nothing like a ‘Canon’ vs ‘Nikon’ discussion to get photographers going. Those with cameras from either brand love to defend their purchase…. and those with other brands always have an opinion too. So when we were offered this infographic we thought it might be a fun comparison!

Purdy! Very cool to think about the concept of a home and how it changes around the world. by simpleicarus Dec 8