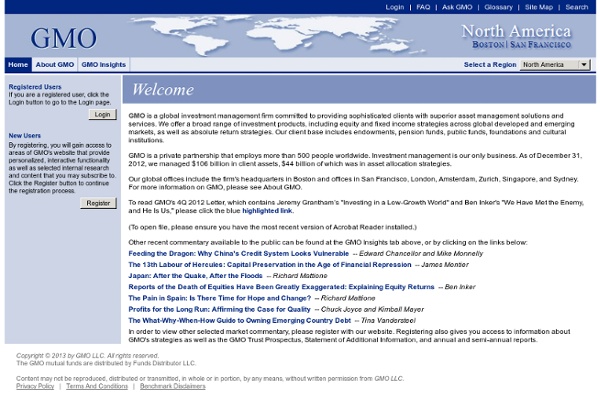 GMO is a global investment management firm committed to providing sophisticated clients with superior asset management solutions and services. We offer a broad range of investment products, including equity and fixed income strategies across global developed and emerging markets, as well as absolute return strategies. Our client base includes endowments, pension funds, public funds, foundations and cultural institutions. GMO is a private partnership that employs more than 550 people worldwide. Investment management is our only business. As of September 30, 2013, we managed $112 billion in client assets, $55 billion of which was in asset allocation strategies. Our global offices include the firm's headquarters in Boston and offices in San Francisco, London, Amsterdam, Zurich, Singapore, and Sydney. To read GMO's 4Q 2013 Letter, which contains Jeremy Grantham's "Year-End Odds and Ends" and Ben Inker's "Divesting When Discomfited," please click the blue highlighted link.

Australia learns, as Dutch did in 1960s, that resource boom has downside | BEWARE Dutch disease. No, this is not a travel warning for tourists visiting the seedier parts of Amsterdam. It's a history lesson about how commodities booms can become double-edged swords for resource-rich countries, a lesson that Australia is now learning as a strong Australian dollar becomes an unbearable burden for much of its economy. Coined after a surging Dutch guilder eviscerated Holland’s manufacturing industry in the aftermath a giant natural gas discovery in 1959, 'Dutch Disease' refers to the loss of competitiveness that labor-intensive industries suffer when a currency appreciates on the back of rapid growth in a capital-intensive resource sector. Companies that extract and market the commodity do well, but the rising currency also causes downstream manufacturing exporters to lose market share to foreign competitors while foreign investment inflows associated with the boom push local asset and consumer prices ever higher.

RBA: Bulletin February 2001-Statement on Monetary Policy Reserve Bank Bulletin – February 2001 Download the complete Statement [PDF 771K] Go To International economic conditions have weakened in recent months and are likely to provide a less favourable environment for the Australian economy in the coming year. The slowing now under way in the US economy comes after a period of exceptional strength, both in terms of the length of the economic expansion to date and the average pace of growth recorded in the past few years, with growth being particularly strong in the first half of 2000. Financial market developments have played an increasingly important role in shaping US economic performance in recent years, both adding impetus to growth through much of the second half of the 1990s and more recently dampening demand. There is at present, therefore, a good deal of uncertainty about the near-term prospects for the US economy. The Australian economy has also slowed in recent months, although for somewhat different reasons than the US. Graph 1 Japan

The Complete And Annotated Guide To The European Bank Run (Or The Final Pha "Nervous investors around the globe are accelerating their exit from the debt of European governments and banks, increasing the risk of a credit squeeze that could set off a downward spiral. Financial institutions are dumping their vast holdings of European government debt and spurning new bond issues by countries like Spain and Italy. And many have decided not to renew short-term loans to European banks, which are needed to finance day-to-day operations. " So begins an article not in some hyperventilating fringe blog, but a cover article in the venerable New York Times titled "Europe Fears a Credit Squeeze as Investors Sell Bond Holdings." Said otherwise, Europe's continental bank run in which virtually, but not quite, all banks are dumping any peripheral exposure with reckless abandon is now on. But first some more details from the NYT: The flight from European sovereign debt and banks has spanned the globe. Is this setting familiar to anyone?

Mohamed El-Erian offers six reasons why business investment has stalled, de NEWPORT BEACH, CALIFORNIA – Some economists, like Larry Summers, call it “secular stagnation.” Others refer to it as “Japanization.” But all agree that after too many years of inadequate growth in advanced economies, substantial longer-term risks have emerged, not only for the wellbeing of these countries’ citizens but also for the health and stability of the global economy. Those looking for ways to reduce the risks of inadequate growth agree that, of all possible solutions, increased business investment can make the biggest difference. And many medium-size and large companies, having recovered impressively from the huge shock of the 2008 global financial crisis and subsequent recession, now have the wherewithal to invest in new plants, equipment, and hiring. However one looks at it, the corporate sector in advanced economies in general, and in the US in particular, is as strong as it has been in many years. First, companies are concerned about future demand for their products.

Bank Runs: The Concise Encyclopedia of Economics | Library of Economics and A run on a bank occurs when a large number of depositors, fearing that their bank will be unable to repay their deposits in full and on time, simultaneously try to withdraw their funds immediately. This may create a problem because banks keep only a small fraction of deposits on hand in cash; they lend out the majority of deposits to borrowers or use the funds to purchase other interest-bearing assets such as government securities. When a run comes, a bank must quickly increase its cash to meet depositors’ demands. It does so primarily by selling assets, often hastily and at fire-sale prices. As banks hold little capital and are highly leveraged, losses on these sales can drive a bank into insolvency. The danger of bank runs has been frequently overstated. Of course, if the depositors’ fears are justified and the bank is economically insolvent, other banks will be unlikely to throw good money after bad by recycling their funds to the insolvent bank. About the Author George G.

Are Ever Larger Global Booms and Busts Really Inevitable? — jaredbernsteinb I’ve been meaning to respond to this piece by Eduardo Porter from a few days ago on both recent and historical stirrings in global financial markets. I found it to be unduly depressing and defeatist. At least, I think it’s “unduly” so—there’s a chance the Porter’s right. The piece argues that the future holds bigger and badder bubbles and busts and there’s just not much that anyone can do about it. The US housing bubble contains all the features of the story. Economists quoted in the piece point out that such booms and busts are “older than the hills” and are likely to get worse before they get better…actually, none of them said anything about getting better. “It’s not even clear,” Porter argues, “what governments should do about presumed bubbles. In fact, the key word a few ‘grafs up is “unregulated.” Porter mentions that “macroprudential rules.” Now, many economists, including most cited in the piece, do not believe we can get this right.

Big ups and downs give daytraders a way to thrive