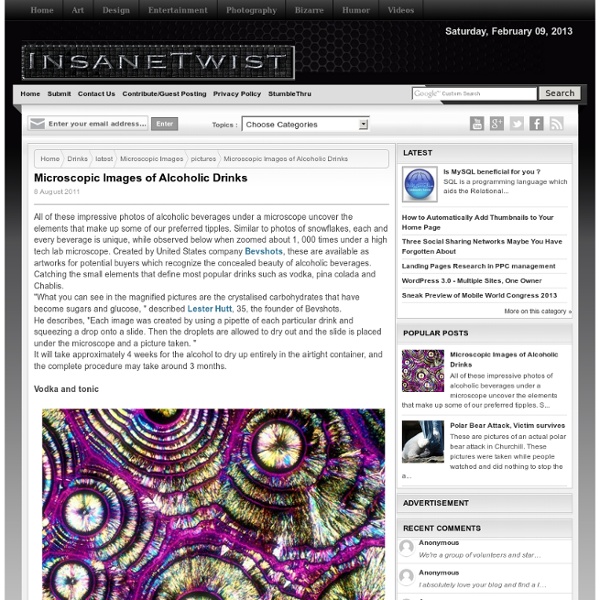 All of these impressive photos of alcoholic beverages under a microscope uncover the elements that make up some of our preferred tipples. Similar to photos of snowflakes, each and every beverage is unique, while observed below when zoomed about 1, 000 times under a high tech lab microscope. Created by United States company Bevshots, these are available as artworks for potential buyers which recognize the concealed beauty of alcoholic beverages. Catching the small elements that define most popular drinks such as vodka, pina colada and Chablis. "What you can see in the magnified pictures are the crystalised carbohydrates that have become sugars and glucose, " described Lester Hutt, 35, the founder of Bevshots. He describes, "Each image was created by using a pipette of each particular drink and squeezing a drop onto a slide. Vodka and tonic Whiskey Vodka Tequila Sake Pina Colada Martini Dry Martini Champagne Red wine German Pilsner inevitable Coca Cola

6 Animals That Can Get You High Most human beings are inexplicably drawn to at least some measure of mind-altering substances, from your grandmother sipping her soothingly-caffeinated tea to the dude in Under Armour sweatpants puking out rivers of beer in front of your apartment building at seven o'clock on a Sunday morning. However, only the few, the visionaries, look at passing wildlife and think, "Hey, I wonder if that creature can get me wasted? Let's lick it and find out." The sad part? Those guys are often rewarded for their efforts, by animals like...

20 Most Amazing Microscope Shots These microscope pictures are taken from the book ‘ Microcosmos’, created by Brandon Brill . This book includes many scanning electron microscope (SEM) images of insects, human body parts and household items. These are the most amazing images of what is too small to see with the naked eye. WebGL Water Loading... Made by Evan Wallace This demo requires a decent graphics card and up-to-date drivers. If you can't run the demo, you can still see it on YouTube. Interactions: Draw on the water to make ripples Drag the background to rotate the camera Press SPACEBAR to pause and unpause Drag the sphere to move it around Press the L key to set the light direction Press the G key to toggle gravity

The year in Pictures: Part II The second collection of images from 2011 once again brought us nature at its full force with floods, drought, wild fires, tornadoes and spectacular images of volcanic eruptions. The death of Osama bin Laden, the attack on an island in Norway by a lone gunman, continued fighting in Libya, and protests around the globe were a few of the news events dominating the headlines. -- Lloyd Young Please see part 1 from Monday and watch for part 3 Friday. (45 photos total) A cloud of ash billowing from Puyehue volcano near Osorno in southern Chile, 870 km south of Santiago, on June 5. Science Says: Lungs Love Weed Breathe easy, tokers. Smoking marijuana in moderate amounts may not be so bad for your lungs, after all. A new study, published in this month's Journal of the American Medical Association, tested the lung function of over 5,000 young adults between 18 and 30 to determine marijuana's effect on lungs. After 20 years of testing, researchers found some buzzworthy results: regular marijuana smokers (defined by up to a joint a day for seven years) had no discernable impairment in lung activity from non-smokers. In fact, researchers were surprised to find marijuana smokers performed slightly better than both smokers and non-smokers on the lung performance test.

Colorado River Toad Description[edit] Range of Incilius alvarius in the United States (it also inhabits northwest Mexico) The Colorado River toad can grow to about 7.5 inches (190 mm) long and is the largest toad in the United States apart from the non-native cane toad (Rhinella marina). It has a smooth, leathery skin and is olive green or mottled brown in color. Macro Photography Inspiration by Bill Jones 34inShare I love the amazing details you can find in these shots. When we want to we can find a whole other world, the world of the small. Index of / vincemckelvie: tumblr needs to get on that auto play video functionality Better late than never

Earth Day 2010 Yesterday was Earth Day, since 1970 it's been a day set aside to remember and appreciate the Earth's environment, and all of our roles within it. As a way to help appreciate and observe our environment, I've collected 39 recent images here, each a glimpse into some aspect of the world around us, how it affects and sustains us, and how we affect it. Here's hoping everyone had a great Earth Day yesterday. (39 photos total)

Pot Brownies In a world where smelling like fresh smoked bud is not exactly accepted, WeedStrain.com proposes a powerful, brain boiling alternative: dro cakes. Bud brownies. Space cakes. Whatever you call brownies with weed in them, we have a recipe that will…how do you say…get you high as fuck. The Most Addictive Drugs in the World Many people think that heroin is the most addictive drug in the world. The truth is, that although heroin is one of the most dangerous drugs in the world, it is NOT the most addictive. You may be surprised to learn that some of the drugs the experts have found to be most addictive are actually legal. The most addictive drugs Nicotine. Although studies vary, it is generally believed that over 30% of those individuals who use nicotine for a period of time become addicted.

I wish I could get prints of these! by roxyriley Sep 11