How to Add Up the Weights When You're Lifting With a Barbell. Why Deadlifts Are Worth the Hype, and How to Do Them Safely. The Right Way to Warm Up for Consistently Stronger Weightlifting. How Long You Should Rest Between Sets for the Biggest Training Benefits. The Right Way to Do the Barbell Row. I promise he’s putting a premium on exercises that work his backside. 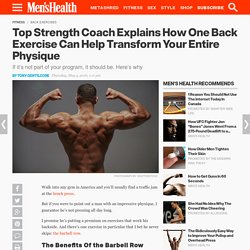 And there’s one exercise in particular that I bet he never skips: the barbell row. The Benefits Of the Barbell Row 1. Better posture The barbell row targets your upper back muscles—your middle and lower traps, your rhomboids, and the stabilizer muscles in the back of your shoulders—helping to pull your shoulders back. 2. The row trains your trapezius and rhomboids—muscles that help keep your shoulder blades from moving as you bench press.

It gives you a more stable “platform” to press the weights from, and decreases your risk of shoulder injury. 3. A thicker, wider, more muscular upper back results in the coveted V-shaped torso. Related: Build Your Best Body At Home In Less Than 30 Minutes a Day With the Men’s Health 21-DAY METASHRED 4. Strong lats, traps, and rhomboids prevent excessive spinal rounding during the deadlift and squat. 5. Actually, no, it won’t. The Right Way to Do the Barbell Row My step-by-step tips: 1. 2. Alan Thrall. Fixing Your Squat : Falling Forward, Butt Wink, Lower Back Pain. Why Squats Are the Best Strength-Building Exercise for Your Legs. A to Z Exercise Listing. How to Train Your Entire Body With One Weight. Strength Training 101: How to Squat Properly. This is an article by NF Team Member Staci. 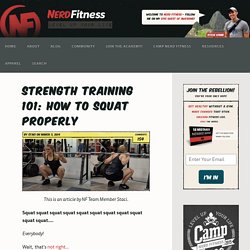 If you’ve never squatted before, you might be a bit intimidated about the idea of starting a big new exercise. Squats are a big part of the Nerd Fitness Academy, and today we want to give you the confidence you need to START. Why squat? Squats are one of the most foundational functional movements in our lives. In some countries, not only do they continue to sit in a full squat (sometimes called a “third world squat”), but instead of sitting on a toilet, they squat over it.

Strength Training 101: The Deadlift. This is a post by NF Team Member Staci Ardison, who recently deadlifted 405 lbs at Camp Nerd Fitness. 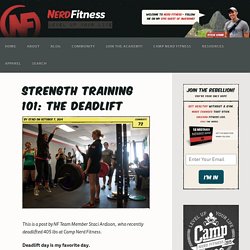 Deadlift day is my favorite day. And it’s Piglet’s too. When my story came out in July of 2011, I said that I’m simply happier on days that I deadlift – and that holds true to this day. There’s really nothing more satisfying than picking up a ton of weight off the floor and holding it in your hands. Jón Páll Sigmarsson, the Icelandic Strongman/Powerlifter once said (while deadlifting 1005 lbs), “There is no reason to be alive if you can’t do deadlift.” Now, that may be a bit extreme, but deadlifting is truly a romantic lift. On deadlift day, I don’t need assistance or a spotter – it’s just me, the barbell, and the weight. But even with so much going for it, many people are afraid of the deadlift and avoid it at all costs, citing fear of injury. However, deadlifting in itself is not dangerous – but like with any movement, deadlifting wrong can be.

Why Deadlifts? What do you bench? Strength Training 101: The Bench Press. This is an article from NF team member Staci. 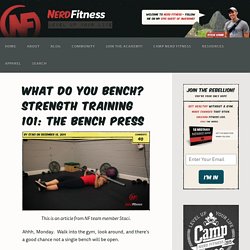 Ahhh, Monday. Walk into the gym, look around, and there’s a good chance not a single bench will be open. National Bench Press Day. Every day. For many years now, bench press has been considered by many to be the most important exercise in the gym, so many people put the bench front and center in their training program, before all else. For the last 30-40 years, the bench press has become the universal lift for bros everywhere to determine out how strong someone truly is.

However, as popular as it is, the bench press in its current form is really less than 100 years old. In fact, until the 1930’s, people did a movement called the “floor press” (which is still done today, and is pictured above), which was similar to a bench press only done from the floor. As the bench press became more and more popular, powerlifting emerged in the 1970’s and separated itself from weightlifting as a sport of its own.