A Pep Talk from Kid President to You. "Nothing In This World Worth Having Comes Easy" Two kinds of mistakes. Do you remember? Believing what we want to believe. Human beings, thanks to culture and genetics, are inclined to be pessimistic, fearful, skeptical and believers in conspiracy theories. 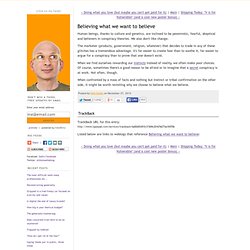 We also don't like change. The marketer (products, government, religion, whatever) that decides to trade in any of these glitches has a tremendous advantage. It's far easier to create fear than to soothe it, far easier to argue for a conspiracy than to prove that one doesn't exist. When we find ourselves rewarding our instincts instead of reality, we often make poor choices. Of course, sometimes there's a good reason to be afraid or to imagine that a secret conspiracy is at work. When confronted by a mass of facts and nothing but instinct or tribal confirmation on the other side, it might be worth revisiting why we choose to believe what we believe. Most lives are lived by default. Jamie lives in a large city in the midwest. 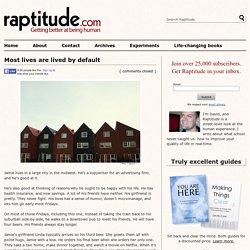 He’s a copywriter for an advertising firm, and he’s good at it. He’s also good at thinking of reasons why he ought to be happy with his life. He has health insurance, and now savings. A lot of his friends have neither. His girlfriend is pretty. On most of those Fridays, including this one, instead of taking the train back to his suburban side-by-side, he walks to a downtown pub to meet his friends. Jamie’s girlfriend Linda typically arrives on his third beer. There was never a day Jamie sat down and decided to be a copywriter living in the midwest. His friends are from his old job. Jamie isn’t unhappy. In two months he and Linda are going to Cuba for ten days. A few weeks ago I asked everyone reading to share their biggest problem in life in the comment section. The first thing is that everyone has considerable problems.

Stay in the same city, but start hanging out with a completely different crowd, and life will change significantly. Your life does not get better by chance, it gets better by change. Jim Rohn #taolife #quote. Think about it. 3 Questions To Kill Every Excuse You’ve Ever Had. How to hack the beliefs that are holding you back. We all have beliefs that are holding us back. 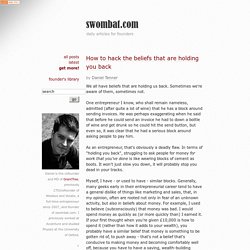 Sometimes we're aware of them, sometimes not. One entrepreneur I know, who shall remain nameless, admitted (after quite a lot of wine) that he has a block around sending invoices. He was perhaps exaggerating when he said that before he could send an invoice he had to down a bottle of wine and get drunk so he could hit the send button, but even so, it was clear that he had a serious block around asking people to pay him. As an entrepreneur, that's obviously a deadly flaw. In terms of "holding you back", struggling to ask people for money for work that you've done is like wearing blocks of cement as boots.

Myself, I have - or used to have - similar blocks. Another would-be entrepreneur I spoke to recently was afraid to quit his job. Now, perhaps the beliefs holding you back are of a different nature, but even if the "money thing" or the "quitting thing" don't apply to you, don't disregard this article. Get Disciplined, Not Motivated. It's all who you know? 20 Things I Should Have Known at 20. Meg Jay: Why 30 is not the new 20. Getting Things Done > Grade Point Average. Zoinks! 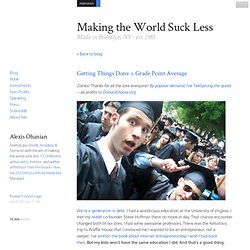 Thanks for all the love everyone! By popular demand, I've TeeSprung the quote -- all profits to DonorsChoose.org We're a generation in debt. I had a world-class education at the University of Virginia. I met my reddit co-founder Steve Huffman there on move-in day. A year ago I sat on a panel at the White House* for a room full of deans from universities across the country. Paul Graham says the best founders are "relentlessly resourceful. " I've been thinking about that day in D.C. ever since. Getting Things Done > Grade Point Average I'm an employer and I don't really care where you went to school or what your GPA was -- I want to know what you've done. This will not be on your course syllabus What are you passionate about?