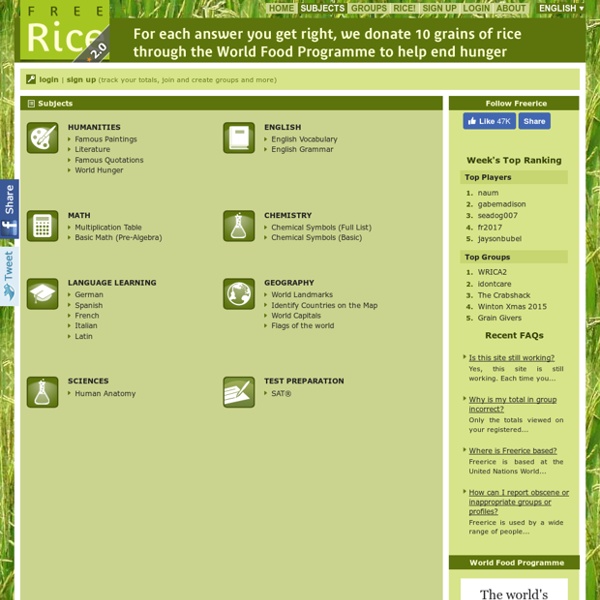 The history of the European Union EU Pioneers The following visionary leaders inspired the creation of the European Union we live in today. Without their energy and motivation, we would not be living in the sphere of peace and stability that we take for granted. From resistance fighters to lawyers and parliamentarians, the EU pioneers were a diverse group of people who held the same ideals: a peaceful, united and prosperous Europe. Beyond the pioneers described below, many others have worked tirelessly towards and inspired the European project.

Games Game based learning “Games are an extraordinary way to tap into your most heroic qualities.” - Jane McGonigal, Author of Reality Is Broken: Why Games Make Us Better and How They Can Change the World People enjoy playing video games. The Best Part of Life - Sistering Recently someone stood up at one of our events and said, G: If you could give women one piece of advice, what would it be? And I said: Sister each other, because Sistering is the best part of life. Then I described what Sistering is, what it looks like and feels like. And my brilliant, generous friends at SALT asked me to repeat what I said: so that every single one of you could hear it. Because you are the most Sistering sisters in all the land.

70 Best Bodyweight Cardio Exercises Related: METASHRED EXTREME—the Ultimate Fitness Program From Men’s Health Designed to Shred Body Fat and Max Out Muscle Growth At the Same Time These resistance-training movements are so effective at annihilating calories for several reasons, he explains: 1. Gamefinder Carbon Cycle GameCan you master the original shape-shifter, the Carbon Cycle? Transform carbon from water to sky to land--before your tricky opponent does! Water Cycle GameCan you move water from the ocean to the sky--and then back again? The Water Cycle game shows you how, but there's a tricky opponent! Nitrogen Cycle GameCan you control nitrogen and move it from plants to deer to clouds? You'll have to watch out for a tricky opponent!

Top Ten Kindness Stories of 2010 1: A 15 Year Blessing From A Homeless Person On the way back from work every evening, more often than not there would be a homeless man standing at the exit of the freeway... He always waved at every car, he was always happy and smiling and sometimes almost dancing. Every day after work I would remember to gather any spare change, and put it aside to give to him if I saw him. A feeling of joy would come over me every time I saw him, as I came off the ramp. He had that effect...